The expanded line offers hunters and shooters a broader choice and variety of options, from the very basic necessities of the original Eliminator to the top-of-the-line Eliminator III with its new X96 reticle that will range at any magnification out to 1,200 yards and a new windage compensation system.

The sleek, new design of the Eliminator III mirrors the form of a traditional riflescope, yet there is nothing traditional about this flagship scope. Designed for centerfire rifles, the Eliminator III 4x-16x-50mm laserscope features enhanced ballistic programming where the shooter enters not only the amount of bullet drop at 750 yards for load he is shooting, but the ballistic coefficient (BC) for his specific cartridge. The new X96 reticle provides a convenient and accurate method to manually compensate for wind. The digital readout displays a 10 MPH Wind Value as a “Dot Value” for the shooter’s specific cartridge at the indicated range. All these elements have been perfected and are available at the touch of a button. Suggested retail price is $1,499. 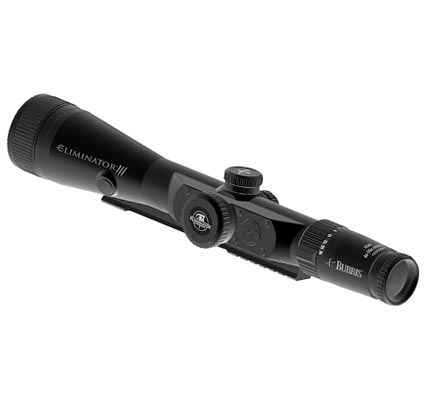 The new Eliminator II, a 4x-12x-42mm laserscope with the X38 reticle accurately calculates the distance out to 999 yards at any magnification, and it can also be programmed for any gun and any load. This new addition to the family of Eliminator scopes comes standard with inclination/declination compensation, making up hill and downhill shots incredibly accurate. For maximum efficiency and fingertip control, the Eliminator II comes equipped with a remote activation switch that can be attached to the firearm’s forearm or the scope’s objective bell. Suggested retail price is $999.

The new Eliminator 3.5x-10x-40mm is similar in design to the original Eliminator. The 3.5x-10x-40mm provides accurate ranging out to 800 yards, and it can be programmed to work with any gun and any load. The 3.5x-10x-40mm must be set to 10x magnification when ranging targets or trophies. For the shooter or hunter who only needs basic laser rangefinding capabilities, this scope is the perfect choice. Suggested retail price is $799.

The original Eliminator 4x-12x-42mm has set the standard in the industry for laser rangefinding riflescopes. It works with any gun and any load with accurate ranging out to 800 yards when set to 12x. It offers inclination/declination compensation and comes with a remote control. The suggested retail price of the 4x-12x-42mm is $949. Currently, there is a $100 rebate on 4x-12x Eliminator; visit www.burrisoptics.com for more information. Learn more at Burrisoptics.com.