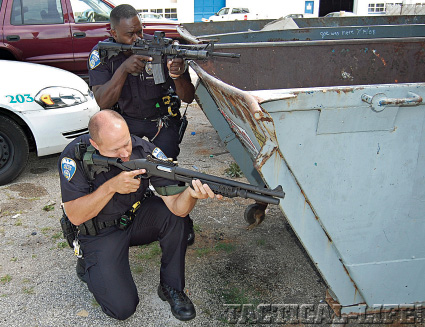 Seems, they’re everywhere, black rifles also known as 5.56mm carbines. They fly off the shelves, especially with the current political climate and the fear of new gun legislation, buyers are enduring higher prices and waiting longer to get a carbine. But there in the corner of the closet or gun cabinet sits the trusty old scattergun, all but forgotten about in today’s tactical climate.

Don’t get me wrong, I like 5.56mm and 7.62mm carbines. I instruct officers and instructors for my agency and many others in the operational use of the carbine. But has the carbine made the shotgun obsolete? Does the shotgun still have a role in the military, law enforcement and the private sector?

Certainly both rifle and shotgun have a rich history in this country and in our military actions on foreign soil. Both have served the civilian population by putting food on the table and defending the homestead. From the founding of this country and its fight for independence to the trenches of World War I and on to the streets of Baghdad, both have served our military personnel well. Law enforcement personnel in the old west were at home with the Greener double barrel 10 gauge as they were with the lever action carbine. Today’s cops field both with an increasing move toward the police rifle. Let’s see how they measure up.

Ease of Use
Single- and double-barreled weapons in both rifle and shotgun are certainly easier to use but the limited ammunition capacity makes them a temporary solution if they happen to run dry and until they’re reloaded. Certainly a 30-round AR-15 magazine loaded with 28 rounds gives greater ammunition capacity but this is not an excuse for sloppy shooting. A 5.56mm bullet will travel approximately 500 yards until it falls to Earth and every trigger puller in today’s world is responsible for the rounds fired. Don’t tell me that misses don’t matter, I was on the scene of a LE shooting where one pistol round missed the bad guy, crossed the street and perforated the side of a house, killing the home owner who was asleep on his sofa.