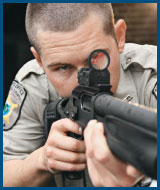 For many years, buckshot has been the ammunition of choice for the police shotgun. Within its practical range, multi-projectile buckshot loads are very effective, providing that one places the pellets where they will do the most good. In my part of the world, 00 buck is by far the most popular load and features nine .32 caliber pellets with a muzzle velocity just less than 1300 feet per second (fps).

But is buckshot really the best way to go? Because of the spherical nature of buckshot pellets, energy is lost quickly. Buckshot begins to spread out the instant it clears the muzzle of the shotgun and this makes keeping all the pellets on the threat problematic. In built-up environments, pellets that don’t hit the target can strike innocent bystanders.

This can be mitigated to a certain degree but not entirely eliminated by using the better buck loads or constricting the choke. In police shotguns, the practical range of buckshot is 25 yards or less. Within its limited range, buckshot is effective against unarmored threats, but fares poorly when intermediate objects get in the way.

Because of the performance limitations of buckshot, many agencies are now deploying patrol rifles in their place. Rifles certainly afford the user greater reach than the buckshot-stoked shotgun plus the ability to place shots with surgical precision. In the near term, even more agencies will be jumping on the patrol-rifle bandwagon.

Slug Superiority
Not every outfit is prepared to issue patrol rifles to the troops as budgetary and political constraints often get in the way. But if buckshot doesn’t cut it and rifles aren’t in the cards, consider rifled slugs. Loading up that tried and true shotgun with rifled slugs effectively quadruples its effective range. A properly set up shotgun can deliver slugs with great accuracy. Unlike buckshot, slugs will effectively breech light cover or obstacles that a threat can be positioned behind. While there is no hand held weapon that is 100 percent stopper, a torso hit with a slug comes pretty close.

My agency issues both slugs and buckshot to our officers and shotguns are individually issued. Officers may load with either slugs or buck, depending on the mission at hand. Most load up with slugs because of the greater reach it affords.

Slug Selection
The name Brenneke has long been synonymous with high performance rifled slugs and their storied line has several different offerings suitable for law enforcement. Recently, I received four different types of 12 gauge Brenneke slugs, all of which have much to offer. At the top of the list is Brenneke’s new Special Forces Short Magnum, specifically designed for maximum penetration. Another recent entry is the Green Lightning Heavy Field Short Magnum loaded with a 1.25-ounce slug. Brenneke’s original Classic Magnum with a 1.125-ounce slug and the reduced velocity Tactical Home Defense Slug were also represented in the mix.

The big buzz at the Federal Cartridge Corporation is their TruBall Rifled Slug. By using patented TruBall technology, Federal has come up with a way to better stabilize the slug in the bore for better accuracy. Both a standard velocity and a low-recoil version of the Federal TruBall Slug are available.

For many years, my agency has utilized Remington’s Law Enforcement Reduced Recoil rifled slug for duty use. This 1-ounce load has proven to be very accurate and easy on the shoulder. Field performance, when humanely destroying deer and black bears, has been very impressive.

Range Time
Accuracy testing was accomplished with a Remington 870 with an 18-inch Vang Comp barrel. An Aimpoint Comp M4 red dot sight mounted on a Mesa Tactical rail was utilized to get on target and minimize shooter error. Extreme spread of the 5-shot group was measured to the nearest 0.125-inch and results averaged.

All rounds were fired through an Oehler 35P chronograph to measure muzzle velocity. A Remington 11-87 shotgun with a 20-inch barrel was used in this portion of the test. This gas-operated autoloader was a real plus in diminishing felt recoil and even the heaviest slug loads didn’t batter the shoulder.

Brenneke can be credited with the development of the first high-performance slugs and their current crop includes several solid contenders. Their original Classic Magnum has been on the scene for quite some time and is still a stellar performer. This load averaged 1438 fps through the chronograph screens that translates to 2238 foot-pounds (ft-lbs) of muzzle energy. The Classic Magnum features a 1.125-ounce (490 grains) slug that pushes deep in the vitals no matter what the angle. From my Remington 870 test gun, 50-yard accuracy was just a tad over 3 inches.

One of the most powerful 2.75-inch slugs on the market is Brenneke’s Green Lightning. This load sports a massive 1.25-ounce slug with a distinctive bright green coating to reduce barrel loading. The Green Lightning hit 1,480 fps and generated over 2500 ft-lbs of muzzle energy. Although designed for taking large game, the Green Lightning would be a formidable law enforcement load. If maximum power is high on your list, consider the Green Lightning.

Federal’s TruBall represents a new spin on the classic hollow base rifled slug. TruBall is essentially a Foster-style projectile with a polymer ball filling the hollow base. Federal claims this technology centers the slug in the barrel for better accuracy and has the test data to support it. I had the opportunity to fire TruBall slugs last year during a visit to the Federal plant and was able to post respectable groups with both Remington and Benelli shotguns.

In any event, the 127 TruBall load posted the highest muzzle velocity (1508 fps) of all rounds tested. From our Remington 870 test gun, accuracy averaged 4.125 inches. Recoil in this load could be categorized as brisk, particularly in the pump-action 870. But don’t fret. A low recoil slug load is also available. This load may be the better general issue load for pump shotguns.

Remington’s plain vanilla Law Enforcement Reduced Recoil Slug continues to be a good choice. Muzzle velocity was measured at 1173 fps with 50-yard groups averaging 3 inches. I’ve enjoyed very good accuracy with it in other guns and been able to reliably dump steel pepper poppers at 100 yards.

Felt recoil is easily managed with this load which helps keep shooter focus on the business at hand. This reduced recoil offering from “Big Green” also reliably cycles my Beretta 1201 Autoloader. As with any load, it always pays to check.

There is certainly no best slug load for every application. Consider the mission at hand, gun to be used, training opportunities and shooter aptitude. Heavy slugs at high velocity are clearly not the best choice for infrequent or less committed shooters. They do, however, fill a niche. For the tactical specialist or other motivated shotgunners, high-performance slug loads represent the ultimate “power tool.”

I remain convinced that most shooters, even small stature shooters, can effectively manage slugs with the right training. Reduced recoil slugs by Brenneke, Federal, Remington and others have proven very formidable stoppers and would be excellent choices for general issue.

A word or two about shotguns that launch slugs is definitely in order. First of all, to exploit the advantage of slugs, some sort of rifle sights are an absolute requisite. I tend to favor ghost ring sights which are rugged yet allow one to place slugs on target with surgical precision.

One also needs to consider the operating system of the shotgun. Pump actions, of course, will cycle anything from the lightest bird shot loads to hard-hitting slugs. Heavy loads, however, will often get your attention when fired from a pump gun. On the other hand, autoloading shotguns are often a bit more user-friendly when firing heavy loads. Gas-operated shotguns such as my Robar modified Remington 11-87 has proven effective in taming recoil. They don’t necessarily repeal Newton’s Third Law, but spread that rearward thrust over a larger period of time, diminishing its effect.

Be aware that many autoloaders will not reliably cycle light buckshot or slug loads. This is especially true once you start bolting on accessories such as weapon-mounted lights. A few years ago, I had a few SWAT operators from a big city team in my shotgun class. Outfitted with very popular autoloading shotguns complete with lights, they scored high on cool points. Imagine their surprise when their guns absolutely choked with their issue low recoil load. The really scary point is that they had actually gone out on several jobs with this combination.

Final Notes
So take a little time and do a realistic evaluation on what may be best for you or your outfit. Reliability and shooter comfort in your weapon system should be high on the list of attributes. All loads tested proved accurate enough for law enforcement applications. In any event, it’s far better to find out any shortcomings in the sterile environment of the range.

Buckshot is still great for certain applications but rifled slugs represent a significant boost in performance. Even if buck is used as the general-purpose load, a few slugs on a shell carrier give the user the option to “select load” for threats at a distance.

Slugs are effective from arms length to better than 100 yards, can defeat light cover, and can be placed on target with a reasonable degree of accuracy. With just a little attention to the details and an investment in training, rifled slugs can make the shotgun an even more formidable tool.

For many years, buckshot has been the ammunition of choice for the police shotgun.…