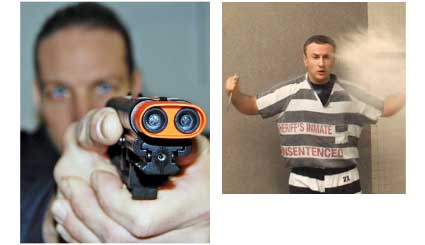 OC (Oleoresin Capsaicin) spray dispensers have been in LE since the late 1980’s. Their wide use enabled any street police officer to carry a less-lethal weapon ready on their belt in addition to the traditional baton. Much effort has been expended to offer even more effective options to LE in intermediate weaponry. Batons have been made collapsible to ensure they were always carried. Tasers were redesigned for more effective use and smaller in size. Lastly, OC products were improved to increase their effectiveness. OC delivery systems have ranged in size from the two-ounce belt-carried units to fire-extinguisher-size dispenser for riot control or barricaded suspects. Paintball-type liquid and powder OC rounds have been developed that combine kinetic energy impact munitions with the debilitating effects of the pepper. Most of us thought we’d seen pretty much the gamut of OC products—that is, until Kimber introduced the JPX Jet Protector.

Kimber, the maker of fine handguns, shotguns and rifles is now in the less-lethal market, importing the JPX from Piexon AG of Switzerland. According to Piexon, they hold patents in high-pressure impulse fire extinguishers as well as chemical irritant systems such as the JPX unit for uniformed police and the Guardian Angel unit for plainclothes officers or civilians.

Maricopa County Approves JPX
The Maricopa County Sheriff’s Office in Arizona is the first department to approve Kimber’s new JPX after extensive evaluation and actual usage in their jail facilities. Once additional units arrive on scene, the plan is to train operators in a four-hour basic training program. With Piexon offering inert training cartridges (water soluble die) with which to train, the plan is for each operator to fire one inert cartridge (two shots) during training to become acclimated to the firing mechanism, and then one live shot to demonstrate the lack of cross-contamination. The cartridges cost less than Taser cartridges, which makes training, annual qualification and scenario-based training economical. With the proliferation of aerosol-based OC products throughout law enforcement, JPX-basic training should not pose any issues for agencies.

Still in development is a comprehensive training program for the JPX. American LE trainers specializing in chemical agents have been recruited to develop the training program in keeping with use-of-force doctrines in this country. With plans to include operator, instructor and master instructor levels, Piexon is modeling the programs after other less-lethal device programs.

The JPX in Action
The JPX is designed to be effective at distances from 5 to 25 feet. The minimum recommended range of 5 feet is given to prevent injuries to the eyes because of the high delivery velocity of the OC agent. Considering that the average “reactionary gap” in American policing is 6 feet, this typically won’t pose a problem.

When the JPX is fired there is an audible “pop” that adds a psychological effect to the application of force. Since the cone of irritant is driven at the rate of 270 mph there is little chance to defend against it via blocking with the hands. Furthermore, the force of the blast will “power through” raised hands and blast through most clothing held up in front of the face.

Capt. Ed Cesolini of the Maricopa County Sheriff’s Dept., whose duties include commanding his agency’s jail special response team, has followed the design of the unit since the JP-401. The Maricopa County SD has a variety of less-lethal devices in its arsenal and Capt. Cesolini is favorably impressed with this OC device in action. Cross-contamination is important to staff members considering the confined space within the jail, there is minimal over-spray and minimal cleanup. One of the things that attracted Capt. Cesolini to the product is that there is little danger of injuries related to falls that frequenly happen when electrical control devies are used.  The secondary injury potential of falls after being hit with an electrical device may expose staff members to greater risk of being sued when the inmate falls off an upper bunk onto the concrete floor. Capt. Cesolini believes that the JPX will eliminate this possibility while increasing the effectiveness of the OC application.

Capt. Cesolini believes that the blast-driven OC with less solvent than aerosols literally is driven into the pores of the suspect and its effectiveness has been observed instantaneously. Considering the large inmate population of Maricopa County’s jail and the wide array of devices they field, that is no small praise. Capt. Cesolini relates that a female inmate, one of his jail’s most violent offenders, has been hit with regular streams of OC spray, rubber-ball impact rounds and electrical control devices. However, when she was hit by a staff member with the JPX, control was instantaneous and she related that next time she was ordered to comply with staff, she would do it because she did not want to get hit with the JPX again.

Evolution of the JPX Unit
Two Swiss engineers, Juerg Thomann and Raphael Fleischhauer, started Piexon in 1999. The technology utilizes pyrotechnic propulsion through high-tech nozzles. The result is the ability to deliver a concentrated form of OC, on a smaller target, at extended distances, with little to no cross-contamination. Pepper spray aerosols have always had the problem of cross-contaminating (filling the air with pepper) even if they were of the stream design, but especially if they were fog-type units. The sprays aerosolized due to the need for the OC (which is sticky or gummy) to be sprayed in a solvent carrier. This frequently resulted in the inadvertent clearing out of a room, or if the OC was blown through the ventilation system, even a building. Foam units attempted to reduce the contamination problem but could be blocked by suspect’s hands, hats, t-shirts, etc. Piexon approached the problem a different way.

Piexon “fires” its OC payload based on a pyrotechnic power drive. The power drive acts upon a moveable piston and propels the liquid at high pressure through a nozzle at 270 mph. This high speed, cone-shaped jet travels through the air with a human-head-sized cone of OC (approximately 18 inches in diameter) at distances of 18 feet or greater. This means that the 10 percent of the OC product that Piexon uses is virtually solvent free, making the pepper spray stickier, more effective, able to be fired longer distances and virtually cross-contamination free.

From Prototype To Production
The JP-401 was Piexon’s first model and was hard to fire due to its design. It was a four-shot unit that was rectangular in shape, 9.25 inches long and about 1.75 inches in width. The unit was held in the fist with no integral sights and fired by the thumb. With input from law officers in this country, the unit was re-designed into a two-shot pistol-style unit. The cartridges, when installed on the polymer receiver, comprise the upper assembly of the unit, side-by-side double barrels and sights. The two cartridges are striker fired utilizing a double-action trigger. After the first shot is fired, the trigger automatically resets upon release, which readies the JPX for the second shot. If a reload is necessary, an ambidextrous release permits the upper cartridge and barrel assembly to be removed and a new unit installed on the mounting rail.

Piexon makes an integral laser available on the JPX, making rapid target acquisition substantially easier. Lasers have proven themselves to be effective by themselves in deterrence. In the case of the JPX, hitting your target is as simple as placing the laser’s red dot on the nose or chin of the suspect. Since many encounters occur in low or subdued lighting, the JPX has an integral Picatinny rail to install a light mount as well.

Final Thoughts
Maricopa County has used the device at least twice, according to Capt. Cesolini. Both deployments were overwhelmingly successful. Feedback indicates exactly what Maricopa County’s Sheriff Department are striving for—an effective less-lethal control device. For additional information and to see a demo of the JPX, visit life-act.com.

OC (Oleoresin Capsaicin) spray dispensers have been in LE since the late 1980’s. Their…