After introducing the world’s most popular self-loading pistol 98 years ago, Colt’s Manufacturing remained the only commercial supplier for over half a century. Although Colt’s continued to produce the Model of 1911, towards the end of the 20th century, with the majority of its resources going toward building the M16 and its variants, Colt’s did little to update the pistol. All that has changed. 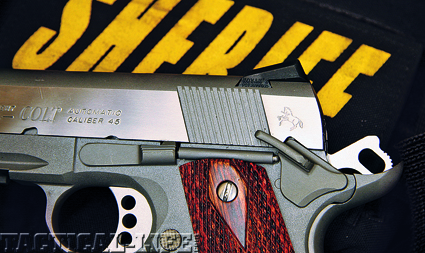 Starting at the muzzle, you do not find a full-length guide rod, but the proven standard recoil spring system that was first introduced in the first Model of 1911. The pistol can be field stripped without using tools. The Colt 1911 pistol has a Colt Champion front sight that is dovetailed into the slide. At the rear of the sight, on both sides of the slide, there are forward cocking grooves that match those at the rear. Now stylish, these forward grooves are most valuable in properly checking for a loaded chamber.

The ejection port on the new Colt is lowered and flared in the usual
manner. The rear sight is a genuine Novak LoMount rear sight and on the left side of the slide beneath it, the traditional Rampant Colt Horse logo. The hammer is of the hollowed Commander style for faster lock time and the extended thumb safety is ambidextrous. 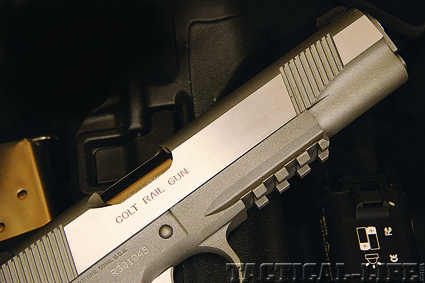 Note the ejection port is lowered and flared.

There is the “beavertail” grip safety, which is well “humped” at its lower end for a positive disconnect when gripped. The mainspring housing is flat and grooved and the magazine well is beveled. A smooth frontstrap leads to the lightweight match trigger and above that a conventional slide lock/release. The two stainless steel magazines furnished with the pistol, hold 8 rounds of .45 ACP using the proven compressible follower.

Forward of the triggerguard and an integral part of the forged frame is the feature that gives the Colt Rail Gun its name. Machined to Mil-Std-1913 specification, the frame rail is (unlike some) as pleasing to the eye as it is functional. This rail accepted several accessories with a snug fit including those from Insight Tech-Gear and SureFire.

Like most of the pistol, the rail is rendered in a smooth matte finish while the sides of the slide and hammer are done in a fine grind or brushed finish. While the surface stands out in any light, it does not reflect light, as does a polished or nickel finish. The rosewood grips are the traditional large diamond pattern.

Those who don’t recall the time before CNC (Computerized Numerical Control) machining cannot appreciate the perfect tolerances to which even mass-produced parts are now held. The Colt Rail Gun is a stellar example of such quality. With virtually no play between barrel, slide and frame there was no doubt the pistol would shoot well. The trigger was also more than satisfactory out of the box and it smoothed up slightly with use. 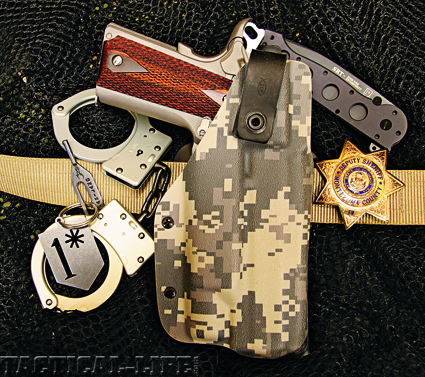 For concealed carry the Colt Rail Gun fits perfectly in the Blade-Tech 1911 Light Mount Holster with the light already on the gun.

Blade-Tech’s Kydex holster has an Army ACU pattern camouflage and an optional thumb break and strap that was cleverly stowed out of the way if not used. Without using the strap, it holds the pistol perfectly with the SureFire X300 WeaponLight mounted and would be ideal for concealment carry. For tactical use, BlackHawk’s Tactical Serpa holster proved excellent with its spare magazine carrier and accessory rack on which the X300 could be carried.

Equipping the new Colt 1911 with a new SureFire X300 WeaponLight proved a tight fit out of the box, but since it went on I didn’t change the mounting parts that came with it, especially since the light got easier to attach and remove after several times. The X300 comes with an additional mounting bracket for different size rails. Having shot a few pistols equipped with weapon lights, there were no surprises in store for me with the X300 including its 110-lumen beam. This blinding white light beam makes target identification easy out beyond 25 yards in the dark and rapid body hits easy. One can also wand the light and move after each shot with rapid reacquisition of the target possible with only a little practice. The X300 can also be pulsated by momentary application of the switch. SureFire’s new X400 will also house a laser. 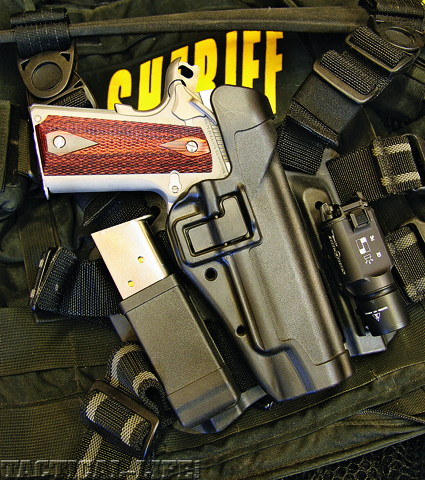 The Colt Rail Gun rides in BlackHawk’s Tactical Serpa Holster like it was made for it. Note weapon light and spare mag mounted on either side.

Worn on the support hand, First-Light USA’s Liberator is controlled by the thumb and can be used to search or clear in any direction while holding the gun at a “safe” angle, such as a low ready position. The Liberator is also out of the way when you go to a two-hand hold on the gun and can even be used while holding the gun with both hands. The Liberator has been adopted by the Border Patrol and other agencies for K-9 use in order to keep the hand free while still working the light. An even smaller model is the Tomahawk. 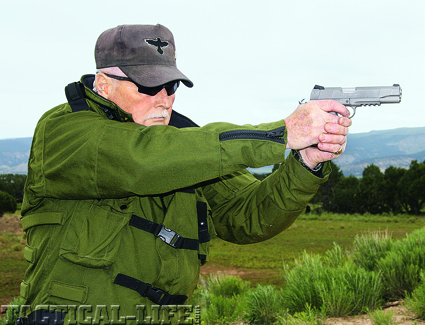 Initial playtime with the new Colt consisted of putting a variety of partial boxes containing .45 ACP ammunition using a modified Weaver stance from 25 and 50 yards. Little trouble was had in making consistent hits on 6-inch steel plates at 25 yards, and from 50 yards we could hit 8-inch plates most of the time.
While this was a pretty good indication of the gun’s inherent accuracy, the proof was that we were able to produce a lot of five shots in the 2-inch ballpark from the bench at 25 yards. I expect accuracy to increase as the trigger continues to break in. There were no malfunctions whatsoever and all functions were smooth and positive.

To say that Colt’s Model 1911 Rail Gun combines style with utility is an understatement. I’d call it a beautiful 1911, especially for the tactical officer, but I’ll let you decide.