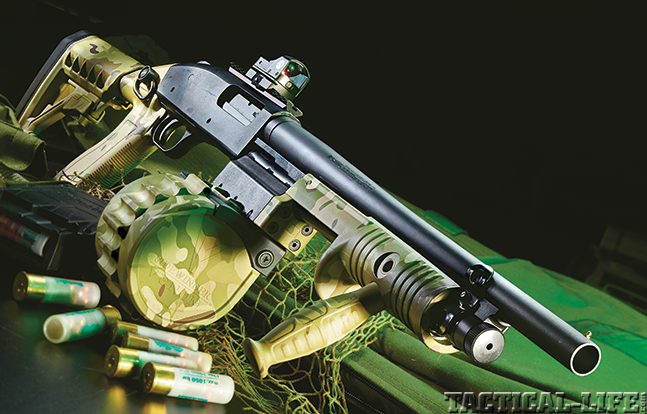 1 of 5
Convert Your Mossberg 12 Gauge Shotgun with the Sidewinder Venom 500 Kit
The Sidewinder Venom kit can convert your pump action into a fast-handling, drum-magazine-fed fight stopper. Shown equipped with a Bushnell First Strike reflex sight. 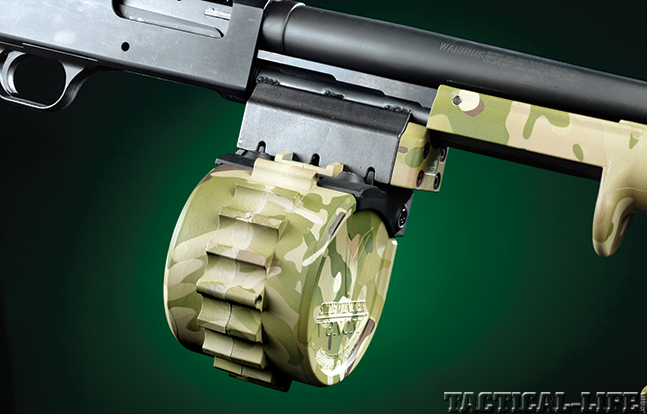 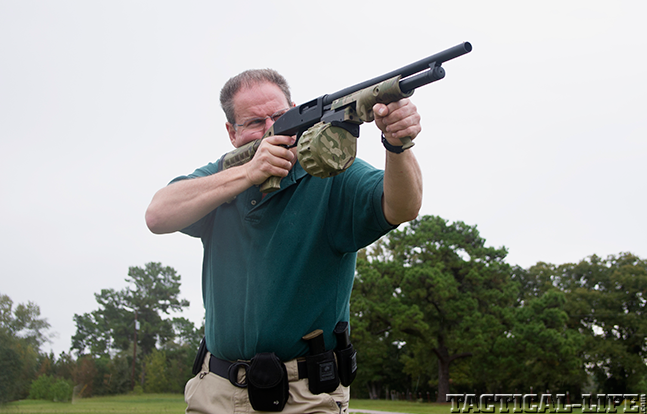 3 of 5
Convert Your Mossberg 12 Gauge Shotgun with the Sidewinder Venom 500 Kit
The Adaptive Tactical forend, with its Kelly grip, provides an added layer of control and makes it easy to fire the Mossberg 500 quickly. 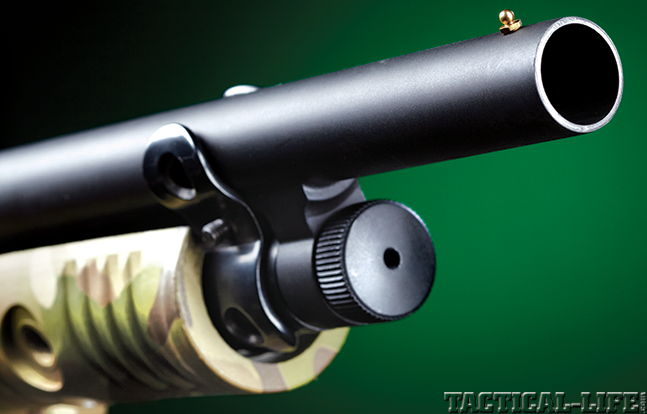 4 of 5
Convert Your Mossberg 12 Gauge Shotgun with the Sidewinder Venom 500 Kit
The converted Mossberg shotgun sports an 18.5-inch barrel and a bead front sight. The Adaptive Tactical kit includes a new magazine tube. 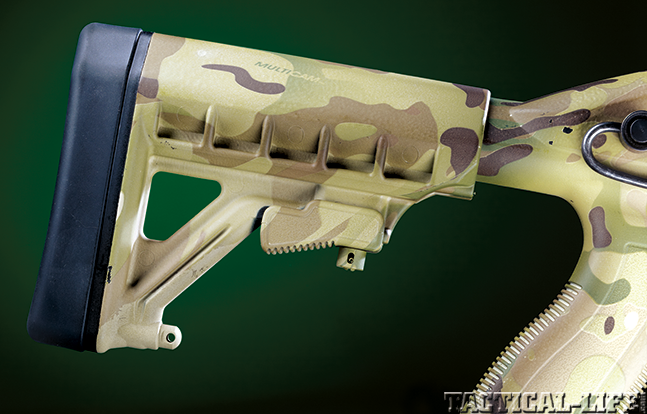 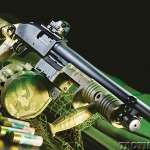 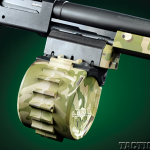 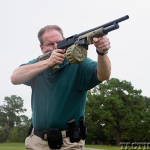 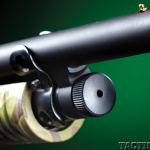 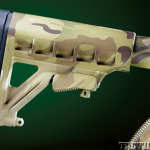 The shortcomings of the most common shotguns found in law enforcement work are twofold: capacity and relatively slow reloading or unloading. With traditional shotguns, the capacity problem is related directly to the tubular magazine length. To increase capacity, magazine tubes have to be lengthened, a problem because most agree that the optimum barrel length for an easy-to-maneuver shotgun is 18.5 inches, barring incursion into NFA territory.

An 18.5-inch barrel usually matches pretty close to a five- or six-round magazine tube with nothing protruding beyond the barrel. This is nice because the tube does not extend much, if at all, beyond the muzzle, keeping the package compact. Add a magazine extension and more rounds appear, but the tube begins to protrude and now you have extra weight created by more rounds toward the muzzle. Neither is good for a fighting shotgun, so what can you do?

Then there is the loading/unloading slowness—not quite as slow as cold molasses, but it might feel that way compared

to a magazine-fed weapon. Stuffing six to seven shotshells into a long tube can take a while. Removing them one at a time might take even longer. What if you could bring magazine loading to your slide-action smoothbore?

Since the company’s introduction in 1961, Mossberg shotguns have been used by many law enforcement agencies and individuals wanting quality and efficiency without breaking the bank. It should come as no surprise that a company wanting to modify an existing shotgun for tactical advantages would choose the Mossberg 500/590 platform for its subject.

The Mossberg 500, upon which all of Mossberg’s pump actions are based, is a robust very usable slide-action shotgun. It’s built with an anodized aluminum alloy receiver, twin action bars and an ambidextrous thumb safety located on top of the receiver, making it easy to access with your firing-hand thumb from a traditional stock.

“Each magazine loaded smoothly, inserting and locking into the magazine well. Cycling the new slide action was smooth, and I experienced no problems.”

The twin action bars prevent binding that might be found in single-action-bar shotguns. Designed to be durable enough to keep working even when dirty, and easily cleaned after the fact, Mossberg 500s are machined with tolerances that allow dirt to collect without seizing up.

Mossberg 500s load easily and smoothly, and the magazine tube is straight-forward and simple to empty—without working the slide in the process. Strong dual extractors provide redundancy to ensure a recalcitrant, even dirty, shell ejects, should one extractor break.

The Mossberg 500 Special Purpose shotgun I used (specifically Model 50421) for this article possesses all of the traits previously mentioned with several additions. With its 5+1 capacity, black polymer furniture and matte-finished, 18.5-inch, cylinder-bore barrel, the Special Purpose is very usable from the get-go. The well-grooved black polymer forend includes a nylon hand strap to increase your control.

The functional modifications don’t stop there. The traditional buttstock has been eschewed and an Advanced Tactical International (ATI) glass-reinforced polymer Adjustable Shotgun Pistol Grip Stock with a Scorpion Razorback recoil pad has been added. Imagine an AR stock assembly, with a buttstock and buffer tube, attached to the Mossberg 500 Special Purpose by an adapter that fits securely in place of a traditional buttstock. An included five-round sidesaddle can be attached to either side of the six-position stock.

The Mossberg 500 Special Purpose is an excellent shotgun for officers interested in a ready-to-go LE scattergun. The simple front bead sight, without a rear sight, is quite functional. Smooth-topped shotguns with only a front bead can do a great job handling buckshot, and, for those who practice, a good job with slugs. An officer who wants a sight system can add one of several complete ghost ring sight kits, or order the Mossberg 51523, identical in every way except possessing ghost ring sights. Alternately, they can drop one of Mossberg’s Picatinny rails atop the drilled and tapped receiver and install one of Bushnell’s new 1x 28mm Multi-Reticle red dot sight, such as the one I chose.

The 1x28mm Multi-Reticle sight is suitable for shotguns and ARs. It offers four selectable reticle configurations, in either red or green, with five brightness settings. It arrived with everything needed, including two mounts and a battery. The non-magnifying sight was clear, crisp and quick on target. With four reticles and two reticle colors, each person can determine the best setup for different situations. The unlimited eye relief makes this new offering perfect for forward mounting and its 100-percent waterproof, fog-proof and shockproof construction means it will hold up well to 12 gauge recoil.

As mentioned, the 18.5-inch Mossberg 500 Special Purpose has a capacity of 5+1. Jumping to a model with a 20-inch barrel will give you a 7+1 capacity. But many people find the additional inches more cumbersome for working in close quarters, offsetting the two-shell capacity increase. Seemingly stuck between a rock and a hard place, I needed an upgrade for
the 18.5-inch-barreled 500 that retained its handiness. Enter Adaptive Tactical.

For LE users, magazine-fed shotguns have special advantages beyond capacity and ease of reloading. Transitioning from buckshot to slugs is a simple magazine swap and cycle of the bolt. In fact, that goes for anything an officer needs to fill his or her shotgun quickly: accurate slugs, fragmentary slugs, less-lethal munitions, breaching rounds, etc. All can be loaded in specially marked magazines. (With less-lethal ammunition destined for a designated shotgun, of course.) Adaptive Tactical makes this possible.

A modern company, polymer is the primary building block for Adaptive Tactical’s Mossberg 500 conversion kit, but there is also metal. For example, the five-round box and 10-round rotary Sidewinder Venom magazines that Adaptive Tactical’s conversion kits utilize are made of polymer and metal. And nowhere did I find any manufacturing defects in the metal or polymer. There were no flashing or unfinished areas in the polymer.

Converting a Mossberg 500 for the Sidewinder Venom Magazine Kits is fairly straightforward if you are capable of stripping the shotgun down to the bare receiver. A number of the parts from the Mossberg are retained; others are replaced, including the action slide assembly and the magazine tube, which are substituted with metal counterparts.

The sturdy Adaptive Tactical magazine tube contains a slide-action-operated piston. The piston moves shotshells from the box or rotary magazine to the original lifter, which raises it for pickup by the bolt, then into the chamber.

A magazine well with an AK-style magazine release is added in front of the receiver along with the new magazine tube.

The magazine tube is also where a gunsmith may have to do a little work. For the aforementioned cycling to work, the magazine well has to be aligned perfectly, with the mouth oriented straight down. When the Adaptive Tactical tube is first screwed in, the odds favor incorrect orientation, as it bottoms out on the receiver. Emory cloth is included with the conversion kit to carefully remove metal from the Adaptive Tactical magazine tube, allowing it to be twisted deeper, rotating the magazine well into place.

An upgrade to the basic Sidewinder Venom package is the addition of a collapsible buttstock system. An adapter, featuring a comfortable integral pistol grip with internal storage, allows for the attachment of an AR-style buffer tube. The Adaptive Tactical M4-style stock slides on the buffer tube, which should also take your favorite stocks.

For those who would prefer not to delve into their shotgun’s inner workings, Adaptive Tactical will do the installation, or the company has complete packages based on the Maverick 88 ready to ship. I requested the full monty: the base conversion kit with a comfortably shaped forend including a Kelly grip—an offset forend grip movable between two locations—the collapsible stock system, and one each of the five- and 10-round magazines.

The conversion kit arrived wearing an eye-catching Multi-Cam pattern. A sister company, Adaptive Graphx, uses water-transfer printing to apply one of three durable and good-looking Adaptive Tactical finishes, or the kit can be left in black. For other applications, Adaptive Graphx can apply many more than three patterns/finishes.

With the conversion completed, the new shotgun was just as handy and ergonomic as the original Mossberg 500, with the weight of the magazines centering well between my hands—not affecting the muzzle’s easy movement.

A couple of trips to the range determined several things, none negative. Each magazine loaded smoothly, inserting and locking into the magazine well. Cycling the new slide action was smooth, and I experienced no problems.

I need to make a point about the magazines and conversion kits. The magazines are inserted just like an AK’s. Put the front in first and then rock the rear into place. That’s about it, and it is a quick learning curve that anyone can learn with enough hands-on practice.

The quick-to-acquire Bushnell 1x28mm Multi-Reticle was a great help with slug and buckshot testing. Results at 15 yards for buckshot held no surprises, nor did the slug testing at 25 yards. Mossberg’s shotgun barrels don’t seem to vary much from shotgun to shotgun. The Mossberg shot and handled like, well, a Mossberg—it was tough and durable, even if it had been converted to a magazine-fed smoothbore. It worked every time. I really like the Adaptive Tactical forend design, especially the raised lip in front of the magazine well. If you are not using the Kelly grip, the shelf provides an index point and will secure your hand.

I was impressed and pleased by Adaptive Tactical’s conversion of the Mossberg 500 Special Purpose shotgun. It did everything Adaptive Tactical promised, producing an excellent and reliable magazine-fed shotgun. I can see the shotgun being kept with the 10-round magazine in place with an empty chamber—cruiser ready—and one or more five-shot magazines with slugs sitting nearby. It would sure make me more confident if I were patrolling lonely country roads late at night! I’m so impressed that I am keeping this Adaptive Tactical shotgun conversion for myself. 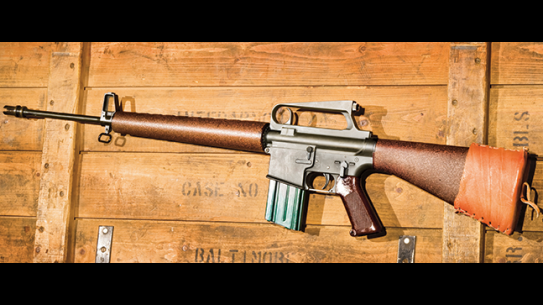 Travel back in time and explore Eugene Stoner's original AR-10 design and how it...