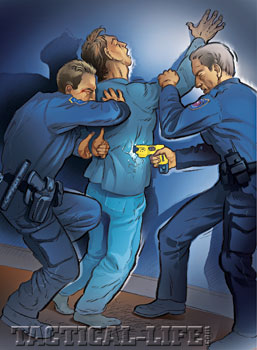 The call was dispatched as “a pregnant woman who had been punched in the stomach.” Along with a patrol sergeant and prisoner transport van, paramedics were sent to the scene as well. Both the male and female involved in this incident were drunk. The house was decorated in what may be called “mass clutter” with little maneuver room for the officers. The bedroom where three EMS personnel tended to the drunken/assaulted victim was even worse. Sgt. Doe related to me that the max space inside the bedroom doorway area was 4 feet by 5 feet. With the medics treating the victim, the responding sergeant and patrolman focused on the male half and quickly made the decision to affect an arrest. The suspect was ordered into a handcuffing position (fingers interlaced behind his head) facing away from the officers.
As the patrolman moved in to gain control and then handcuff, the suspect resisted. The wrestling match escalated into a struggle as the suspect attempted to pull his arms away from the officers who were trying to handcuff him. As the suspect pulled his left hand free, he swung his elbow backwards hitting the patrolman above his left eye, lacerating the eyebrow. Both officers pressed the suspect up against the wall to help control him but in the cramped quarters they were jockeying for position, trying to not trip and fall. They were unable to strike effectively.

Taser Deployed
As is often the case in real-world incidents, the confines were tight and the officers were concerned about the nearby female victim as well as the medics. With the patrolman now injured, bleeding and experiencing blurred vision due to the blood in his eye, the sergeant drew his X26 Taser and fired the cartridge at close-to-contact range. Both probes hit the suspect in the chest area but at such close confines, their minimal spread was not conducive to the Taser’s usual effectiveness.