The first green lasers to hit the market will be in the Laserguard platform for Glock, Smith & Wesson M&P, Springfield XDm and 1911 frames and visually follow company’s award-winning Lightguard™ design. “By now, most consumers are savvy enough to know that green lasers have always been power-hungry compared to their red counterparts,” explained Kent Thomas, Director of Marketing for Crimson Trace. “By mounting them in front of the trigger guard, we’re able to utilize battery power in both a functional and design friendly way significantly more than ever – which means our customers never have to compromise on run time.” Also available in Fall 2012 will be the wildly popular Rail Master product, which is the company’s first Universal fit product for handguns with Picitinny Rails. Just as important as the green laser product introduction, holsters from BladeTech, De Santis, Crossbreed and Galco are available to fit these new green laser sights. 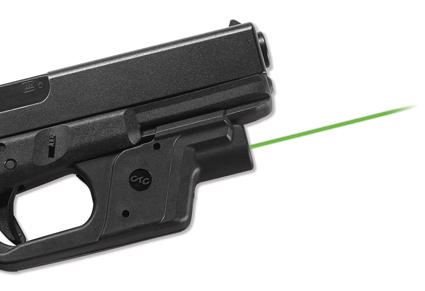 Creating the most buzz and excitement, however, were the sneak-peek prototypes of green Lasergrips®, scheduled to be available in early 2013. Green lasers have traditionally been much bulkier than red versions due to their more complex construction. Until now, this has prevented their use in the patented grip integrated lasers that made Crimson Trace the industry leader in laser sighting systems. Using an entirely new kind of laser, the company has managed to reduce the footprint of the diode package while simultaneously reducing the power it needs to function. “This new technology is a game changer,” said Thomas. “Next year, customers will be able to get the instinctive activation, innovative engineering and quality Crimson Trace is famous for, but with the option of green in a few of the most popular gun frames in the market. Once again, we’ve listened to the market, our loyal consumers and found a way to deliver what they want in only the way Crimson Trace can.”