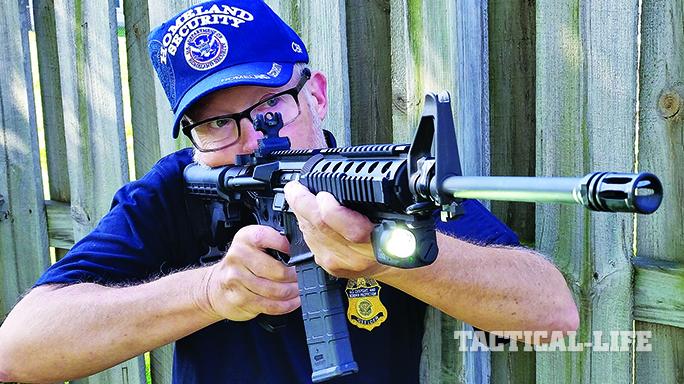 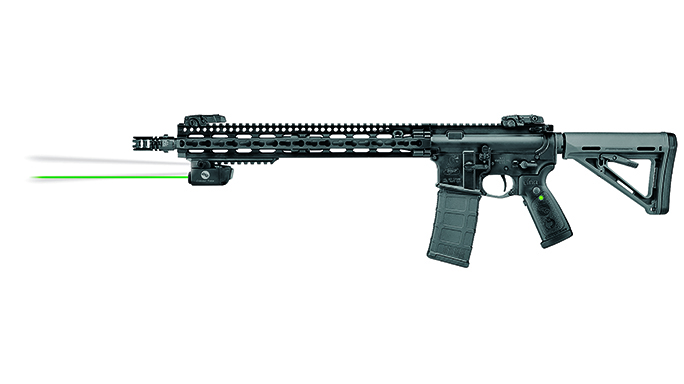 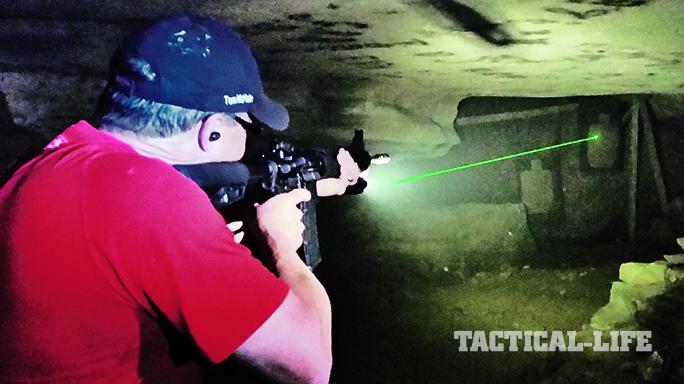 3 of 7
Crimson Trace LiNQ
To test the LiNQ system’s capabilities, several shooters engaged targets inside a small, dark cave at the Rockcastle Shooting Center in Kentucky. 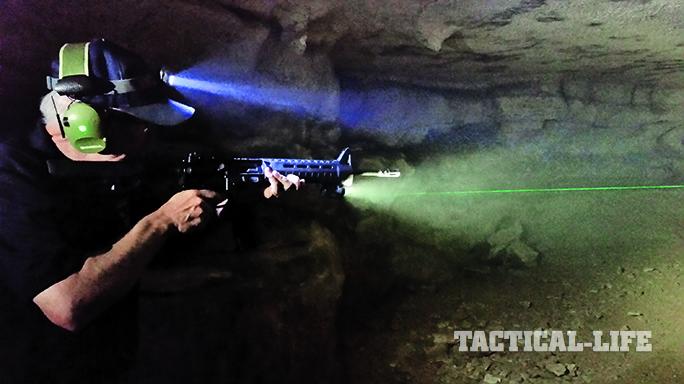 4 of 7
Crimson Trace LiNQ
The author takes aim with the Crimson Trace LiNQ light and laser activated, cutting through the humid air and gun smoke filling the winding cave lined with IDPA-style targets. 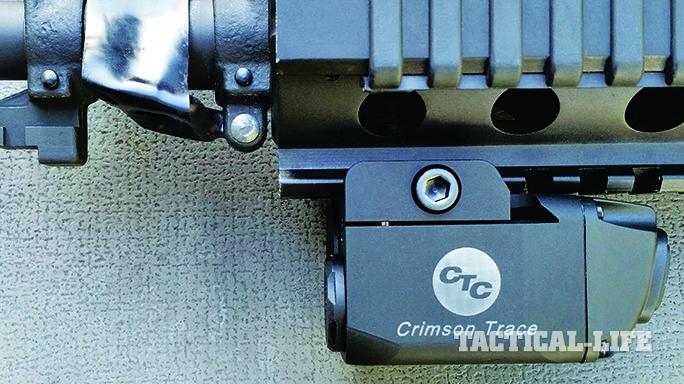 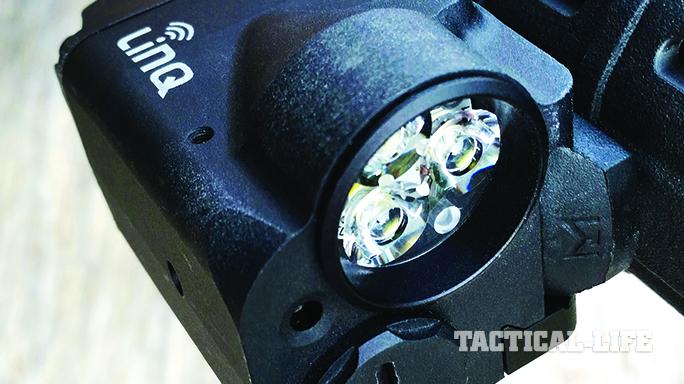 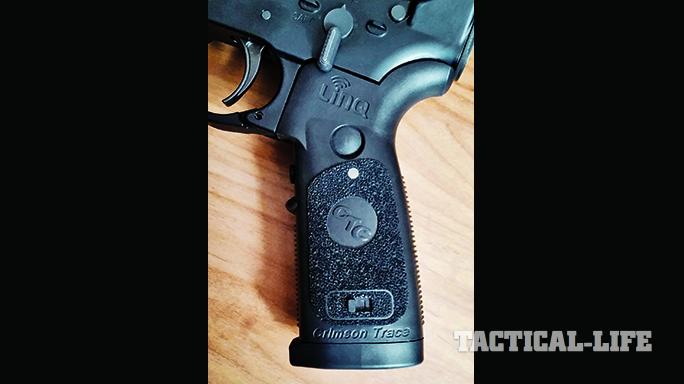 7 of 7
Crimson Trace LiNQ 3
The grip is made of durable polymer. 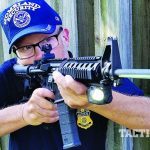 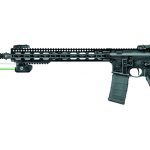 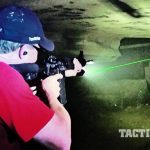 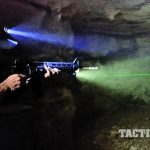 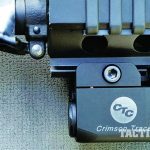 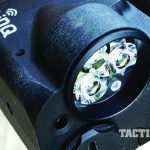 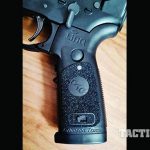 Crimson Trace is known for its instinctively activated laser-aiming devices. As soon as you grip your firearm, the laser activates. And last year the company unveiled its new LiNQ light/laser system for AR-style rifles. Like its predecessors, the Crimson Trace LiNQ system has instinctive activation, but the big difference is that there are no wires or pressure pads to pose potential problems.

The Crimson Trace LiNQ system is composed of two major components: the replacement pistol grip and the light/laser module. Made from a black polymer material that is durable, waterproof and drop-tested per military requirements, the ergonomic grip has textured panels on each side and molded-in serrations on the front- and backstraps. Up front, just below the triggerguard area, is the activation button. The buttons on the sides of the grip allow users to switch between modes—laser and light, laser only, light only and laser/light strobing—along with a green sync indicator that will blink if the module’s battery needs to be replaced. Near the bottom of the left-side panel is the master on/off switch. The grip controls work off a factory-supplied CR2 battery.

The light/laser module features a hardcoat anodized aluminum alloy housing with a matte black finish. It’s about 2.5 inches long, 1.5 inches wide and 1.38 inches in height and adds only a few ounces of weight to the rifle. It has a built-in clamp-type mount, and the module is powered by a factory-supplied CR123 battery.

The 5mW laser produces a green dot approximately 0.5 inches in diameter at 50 feet. As green lasers are more intense than red lasers, it has a constant run time of 2 hours instead of the usual 4 hours for a red beam. The 300-lumen LED white light can be used in steady and strobing modes. At the back of the module is a rubber button to independently switch between modes.

Along with providing the initial batteries, Crimson Trace is currently running a money-saving “batteries for life” program. The LiNQ also comes with all the hardware needed for installation, including mounting screws, grip and module wrenches, a sight adjustment wrench and two cleaning swabs.

Mounting the LiNQ grip and light/laser module is fairly easy and straightforward. The first chore is taking off the grip already on your AR, and make sure that you don’t lose the small safety detent safety spring, as you’ll need to use it for the LiNQ grip assembly. Now insert the batteries and screw down the compartment lids snugly. Slide the master on/off switch forward to the “on” position and then press on the grip’s activation button to be sure the unit is working properly. Screw the grip into place and be sure the safety detent spring is aligned and the safety selector functions properly. Lastly, attach the light/laser module to the accessory rail on your AR’s handguard.

Installed properly, the LiNQ laser and light are factory sighted in, parallel to the barrel for 50 feet. If you need to make adjustments, the module has a two-screw alignment system for changing the windage and elevation on the green dot. Using the adjustment wrench provided, the small screws inside holes in the module housing can be turned clockwise for right/down and counter-clockwise for left/up. Just don’t overturn the adjustment screws. Only in rare cases do the screws need to be turned more than half a turn to make the needed adjustments.

The LiNQ system also requires little routine maintenance. If your firearm needs extensive cleaning, it is recommended that the grip and module be removed first. In any case, don’t allow cleaning solutions or lubricants to enter the laser or light apertures, and keep solvents away from the grip and module as damage is likely to result. The instruction sheet also has a section regarding problem troubleshooting in the event the LiNQ won’t activate, the sync light is blinking or the system needs a reset. Extensive shooting could cause a loss of light or laser beam quality; this is usually fixed by cleaning off the fouling from the lens surface. A couple of swabs have been provided. One should be dipped in rubbing alcohol or window cleaner to loosen the fouling, then a dry swab to complete the cleaning process. Avoid touching the lens with any sharp objects during cleaning.

In late August of 2016, Crimson Trace held a writer’s event at the Rockcastle Shooting Center at the Park Mammoth Resort near Park City, Kentucky. Several days were spent going over the features of the LiNQ system and its operation, and then we did a lot of shooting with LiNQ-equipped ARs in daylight, after dark and even in a unique range set up inside a small cave. To see how the green laser would show up during the day, we went to a range set up on a wooded hillside and ran through a course that included firing at IDPA-type silhouette targets and circular targets at different distances and angles. Shooters had to climb a hill following a trail and engage the targets as they came into view. I noted that even at ranges of 20 or so yards, I had no trouble seeing the green dot produced by the laser beam on the tan-colored cardboard targets.

One night we went out to a range and shot some stages that had been set up the previous week for a 3-Gun match. Again, the IDPA-type targets were set at several distances and at various points were hidden or partially obscured by mock buildings and barrels. Moving from left to right or right to left, the targets were again engaged when the shooter was in the optimal position to see them. At night, both the 300-lumen LED light and green laser helped every shooter identify and engage targets quickly.

Similarly, on two different occasions we went to a small cave out in the woods and literally had to climb down a hole and crawl on all fours to arrive at the part of the cave that allowed us to stand upright. Inside, with the humid air, constant 54-degree temperature, the steam from our breath and gun smoke, we could plainly see the green laser beam as it projected from the module to the target. IDPA targets, backed by bullet-absorbing materials and set up along the winding cave tunnel, were engaged as appropriate. I used my best building-clearing tactics to take down the “bad guys,” and we ran through the course several times over a two-day period. I came away very impressed with the LiNQ light/laser system, which let me react quickly when confronted by cardboard “hostiles.”

During the three days at the Rockcastle Shooting Center, we burned lots of powder and had many opportunities to shoot several LiNQ-equipped ARs. In my notes, I recorded no malfunctions and found that the device was easy to use. It’s the perfect AR accessory, allowing you to identify targets quickly in low light, blind them with a strobing effect if needed, and if you have to shoot, the green laser will make sure your shots count.

Also, Crimson Trace’s Mike Faw advised that the company is contemplating putting out other accessories that can be activated by the LiNQ grip, and the device will soon be available for the AK platform.

This article was originally published in ‘Guns & Weapons for Law Enforcement’ February/March 2017. For information on how to subscribe, visit outdoorgroupstore.com. 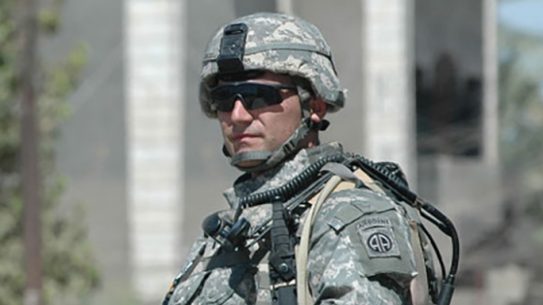 Vermont-based Revision Military has been awarded a contract worth $98 million to produce the...