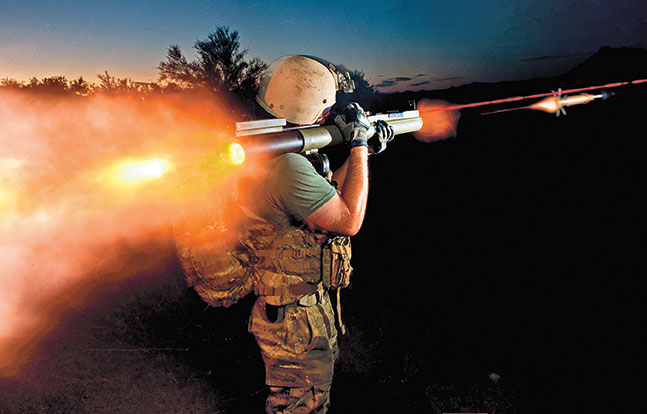 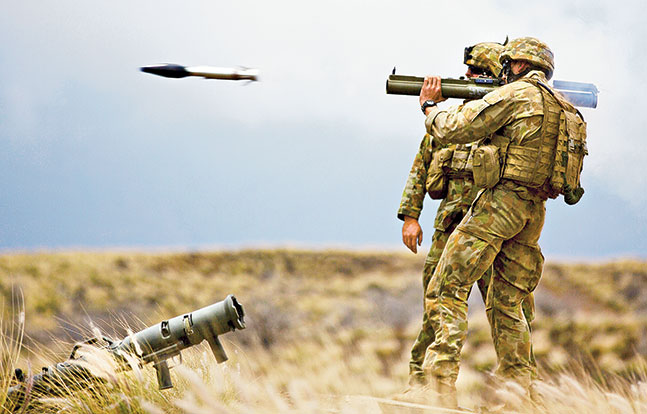 2 of 5
Crimson Trace’s M72 LAW Laser Sight Provides 24/7 Capability
The man-portable M72 LAW has been a standard U.S. infantry weapon for decades. Here troops are using the traditional folding sights, which are harder to aim with and don’t work at night. 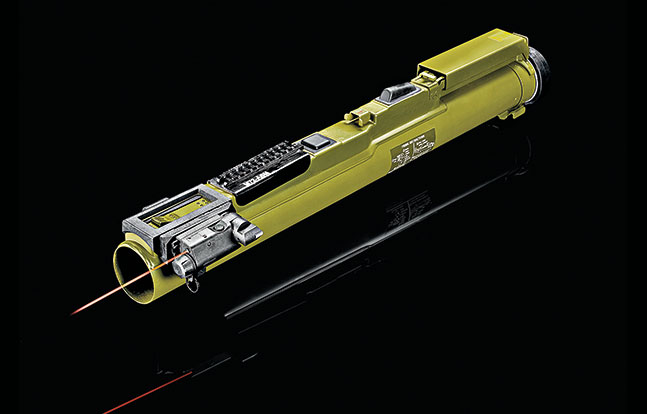 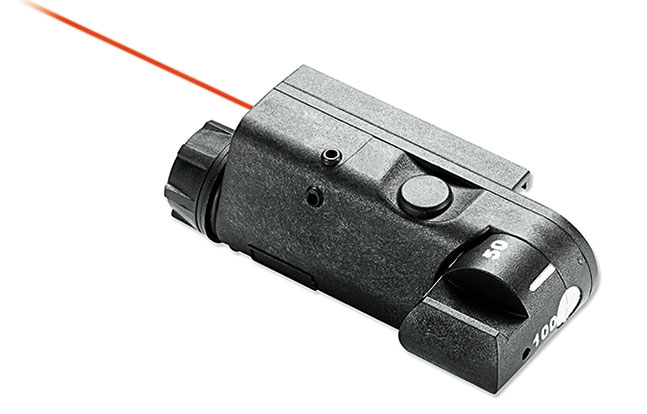 4 of 5
Crimson Trace’s M72 LAW Laser Sight Provides 24/7 Capability
Both visible and infrared versions of the SFL-100 laser sight are available, and the units have a maximum range of 400 meters. 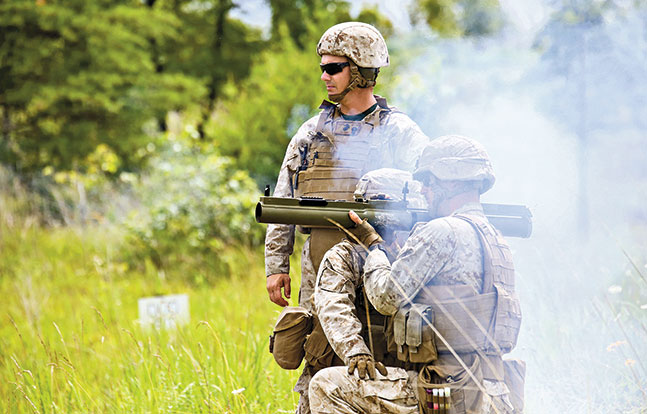 5 of 5
Crimson Trace’s M72 LAW Laser Sight Provides 24/7 Capability
The man-portable M72 LAW has been a standard U.S. infantry weapon for decades. Here troops are using the traditional folding sights, which are harder to aim with and don’t work at night. 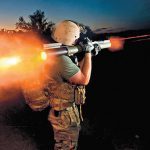 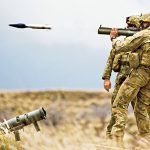 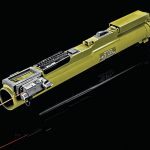 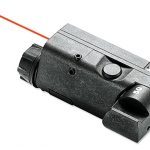 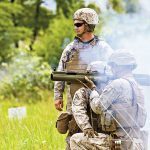 The moonless night is perfect for an ambush. Seven mujahedin, eager to fight, lie in wait with their PK machine gun, trained toward an open field where American soldiers will walk on patrol near an Afghani hamlet. This night they may kill one or perhaps two Americans, damaging the strained American morale and hastening the invaders’ departure. A radio signal from a compatriot hidden near the Americans’ track will alert the gunners to open fire quickly and confidently from their bunker with walls thick enough to withstand return fire from American carbines and light machine guns. After a few minutes of shooting, they’ll run from their shelter into a nearby dry creek bed and fade unharmed into the blackness.

Radio static jolts the jihadists to action. They count off seconds until the Americans step into the killing zone and shoot, PK rounds sweeping the ground. The Americans return fire, but the mujahedin ignore the rounds thudding into their bunker. The Americans cannot use their shoulder-fired weapons called LAWs in the dark. Suddenly, an enormous crash, obliterating the bunker, the PK and its crew, measures the lethal enormity of the insurgents’ mistaken belief.

This scenario soon will be a common experience for those ambushing U.S. ground forces from protected positions at night thanks to a simple, low-cost laser sight that gives the M72 Light Anti-tank Weapon (LAW) the capability to defend and protect American troops from such attacks day or night.

The new LAW laser sight comes from Crimson Trace Corporation (CTC) of Wilsonville, Oregon. Since 1994, CTC has manufactured pistol-grip-integrated, “instinctively activated” (illuminated when holding and pointing the firearm) laser sights that project a visible red or green beam onto the aiming point. CTC now is a global leader in laser sight development and production, with more than 200 systems priced around $400 or less, including grip-integrated, rail- and frame-mounted laser sights for many popular handgun models as well as AR-15 rifles with both visible and invisible infrared beams for use with night-vision equipment.

The M72 LAW, produced by Nammo Talley of Mesa, Ariz., has been an infantry mainstay for more than 50 years. It is a lighter, more portable and inexpensive derivative of the World War II bazooka, firing self-propelled, 66mm munitions from a two-piece extendable tube that is usually discarded after firing. Over the years, the LAW, with several variants currently in use in nearly 30 nations, has incorporated many enhancements, including improved reliability, better triggers and more accurate, powerful rounds tailored for both hard and soft targets with A7 anti-armor and A9 anti-structure rounds. But, the weapon could not overcome a major operational limitation—its rudimentary folding peep sight is awkward in optimum conditions and nearly impossible to use in darkness at extended ranges, making the M72 a daylight-only weapon despite the marked increase in nighttime combat operations and a clear need for penetrative munitions to neutralize structural targets concealing
adversaries.

Now, CTC’s new LAW laser sight gives the system true 24/7 capability. According to Jeff Hoblitt of CTC Defense, Nammo Talley approached the company in 2010 to develop the sight system. “We completed the system development a year and a half after receiving the request,” Hoblitt said. “We had a prototype ready for evaluation in September of 2011.”

Laying Down The LAW

Evaluations included military specification testing to MIL-STD-810G, the Department of Defense’s protocol covering field and laboratory environmental factor tests including extreme hot and cold temperatures, total immersion in soil, water and other fluids, exposure to dust and sand, vibration and shock. Compliance with MIL-STD-810G ensures the LAW laser sight will take plenty of abuse and still function properly in any combat situation.

Laser technology was not an issue for the new sight. “It’s not more powerful or complicated than other laser systems,” Hoblitt added. “The system’s advanced nature is based on its interface with a mounting plate that ensures the laser is automatically bore-sighted when installed on the M72, and an elevation adjustment efficiently and accurately calibrates range to target.” CTC had to develop the dynamics of the interface between the laser and the baseplate, upon which it is mounted in just a couple of seconds. The connection is simple and purely mechanical, but it ensures proper alignment between the beam and the rocket’s trajectory and requires minimal training. The baseplate cost is low, so it can be discarded with the firing tube once the LAW has been used.

Hoblitt also noted that the laser sight, using both a visible red beam and an invisible infrared light visible with night-vision goggles (NVGs) widely used by U.S. troops in night operations, is an eye-safe, low-power device generating less than 5 milliwatts (mW). “Most Western military forces are interested in infrared beams,” explained Hoblitt, “because they’re visible only with NVGs, while red beams mark the operator’s position and make him vulnerable to counter-fire, especially at night. Visible beams are, however, very useful for training.”

In addition to permitting nighttime use, making the M72 a 24/7 weapon system, the new laser also enhances firing during daylight. “Although it is very flexible and versatile, the LAW is more difficult to aim and fire than a rifle even in the best conditions,” Hoblitt explained. “Because the tube balances on top of the operator’s shoulder and has no stock or brace, it is not as ergonomically stable as a rifle, so lining up the peep sight can be difficult. With the laser sight installed, accurate aiming is a far easier two-dimensional process. The operator’s head can be in any position because the front and rear sights require no alignment. You can literally point and shoot.”

The laser has a maximum range of about 400 meters, far beyond the operational range of the LAW itself. Although the laser beam broadens at greater distances and is subject to a variety of lighting conditions, it is exceptionally accurate even at long ranges. “In testing, Navy SEALs who had never fired LAWs before were consistently hitting targets at 350 yards,” Hoblitt said. “They never missed!”

The CTC laser sight is now available to U.S. military forces. U.S. Army Rangers have ordered a quantity, and the sight was issued a National Stock Number in June 2014. The cost of the laser, according to Hoblitt, is low, about $300 or less, about the same as most CTC commercial lasers. The system includes the sight and the mounting bracket. Nammo Talley is planning to install brackets on newly manufactured LAWs in the factory soon, guaranteeing widespread sight use. For M72s already in military inventories, CTC has created a bracket clamp that provides identical functionality once installed on the LAW tube. “It wasn’t easy to ensure the bracket clamp provides the same automatic bore-sighting,” Hoblitt said, “but we did it.”

Today, CTC’s laser sight is only available for the LAW, but Hoblitt notes, “We have the capability and intention to use it for similar systems. Some larger, vehicle-mounted rocket systems utilize night sights, but they’re big and expensive. The laser sight is the right way to go because it’s intuitive, like a heads-up display, and ideal for close-quarters combat in urban environments.” 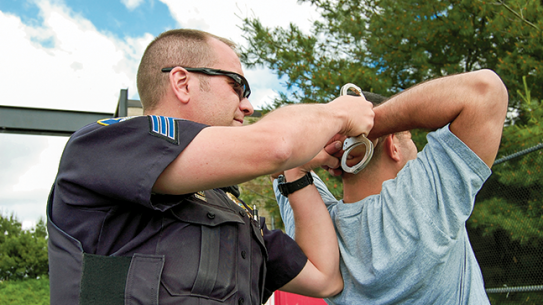 On the Job: Lifesaving Handcuffing Tactics

These handcuffing tactics will keep you in control at all times!