Over the last year, I’ve had the opportunity to test several Wilson Combat rifles. Just about every configuration of their 6.8 SPC rifles has been through my hands. They have always been excellent rifles, so when a 7.62×40 WT rifle arrived, the expectations were high. There was definitely no disappointment. In fact, I asked to test their SBR Tactical in select-fire. All it really needed was a suppressor.

When using short rifles on entry duty over the years, I’ve attached a suppressor when possible. When a 10- to 12-inch rifle is fired in close quarters, it is loud and disruptive. The concussive effect can be significant, especially to the officer standing next to you. You are hoping like crazy for auditory exclusion. Unfortunately, there is no guarantee that will occur. Suppressors deal with that nicely, especially on semi-auto. Most, however, come with a set of their own issues.

Simple physics tells us the quieter the suppressor, the more gas is sent back into the system. Given that most agencies are using gas impingement rifles, this compounds an already iffy situation. Sending copious amounts of gas back into the bolt group can really gum up the works. Depending on the ammunition, this can turn your rifle into a one-magazine gun. Some companies have alleviated this by having the “can” suppress less and deliver less gas. Most are so loud as to be about worthless. Many also come loose and shift your point of aim. Lastly, they can be pretty long, defeating the whole purpose. These suppressors tend to be large paperweights that spend a ton of time in the pack or car.

What you really need is a suppressor that is quiet, gums up the works as little as possible, and does not shift the point of impact much. It’s great if they are short and lightweight. Having it go over the brake would be nice, but it’s not necessary. My tendency is to leave it on if it works; if it doesn’t, it’ll stay off. That may no longer be the case, however, as Wilson Combat has just come up with an excellent solution.

While attending an annual writer’s event at Wilson Combat, I was allowed to see these suppressors getting built. They have a really interesting design. Completely machined from a billet of titanium, they are very lightweight at 17.8 ounces. At just a bit under 6.5 inches, they are not overly long. Threading over the proprietary muzzle brake, they only add 4.5 inches overall. That is close to perfect for a tactical suppressor. The Rapid Thread Muzzle Brake is available in the two most prolific thread patterns, 1/2-28 and 5/8-24, meaning one suppressor can be easily moved among different calibers. 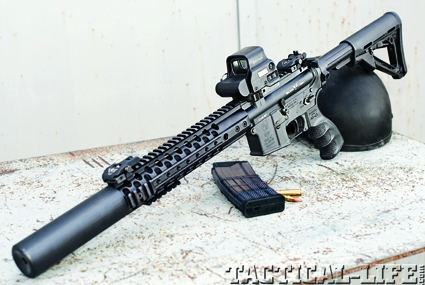 Mated to the Wilson Combat SBR Tactical in 7.62×40 WT, the Whisper762 suppressor effectively cut down on sound without making the rifle too long for entry or CQB operations.

Another really nice feature is the completely monolithic design. It makes these suppressors some of the most rugged and reliable ones you can buy. The internals are all cut from one solid billet. The outer tube goes over the internals and threads on to the back. Then it is simply capped off. Bill Wilson has really done a great job here to make them strong and reliable. As a side benefit, the suppressor is easier to manufacture this way. There is only one weld on the entire thing, the end cap, and even if it broke loose for some reason, it would not stop the suppressor from working. Coated in Armor-Tuff, the Whisper looks incredibly nice and will outlive most of its owners.

Whisper suppressors are a bit larger in diameter than most, but that is by design. This allows the suppressor to capture more gas in a shorter span. Having tested a Whisper556 suppressor that proved to be very effective, the real test would be on the larger calibers like 6.8 SPC and 7.62mm. Even more importantly: How does one work in select-fire?

The primary test rifle for this suppressor was a Wilson Combat SBR Tactical upper in 7.62×40 WT. The upper receiver provided was built with a Wilson Combat 1-in-12-inch-twist, six-groove match-grade barrel measuring 11.3 inches long. Chambered in the 7.62×40 WT, it uses M4 feed ramps for reliability. A carbine-length gas system is used with a low-profile gas block. This gas block fits nicely under a Wilson Combat TRIM rail, which measures 10.4 inches long. This is all part of a forged 7075 flattop upper receiver.

For testing, I mounted an EOTech SU-231/PEQ Holographic Weapon Sight (HWS). Wilson Combat front and rear flip-up sights were added as a BUIS (back-up iron sight) system. In order to facilitate select-fire, the supplied bolt carrier was replaced with a Colt mil-spec unit. The supplied bolt was simply moved over without issue. My Colt M16A2 lower was used for all of the testing with this upper. The trigger in this lower is a Geissele Automatics SSF (Super Select-Fire) and it is equipped with a Primary Weapons Systems Enhanced Buffer Tube and ST2 Tungsten Buffer. The only other additions were some 30-round magazines picked up from Wilson Combat for the bulk of the testing. 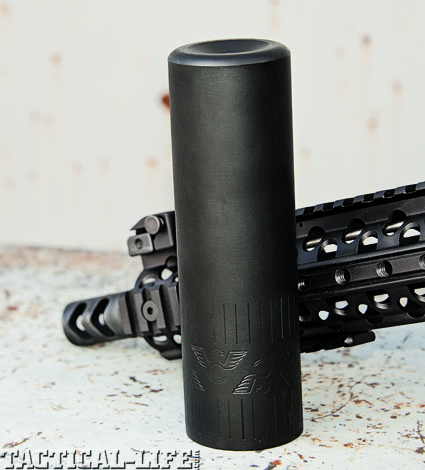 Wilson Combat builds each Whisper suppressor from billet titanium so the design is durable and exact—which translates to no point-of-impact shifts.

Along with the SBR Tactical, two 6.8 SPC rifles were also used: a Wilson Combat Recon Tactical with a 16-inch barrel as well as a Rock River LAR-6.8 Mid-Length A4 rifle. The EOTech was simply moved between rifles, making for little down time.

The accuracy testing was limited to making sure the suppressor had no significant effect on the already-tested accuracy of these guns. All three of these rifles proved very accurate during their respective tests, so if there was a difference, it would show up quickly. When it came to the 6.8 SPC rifles, they printed 1-inch groups or so at 100 yards using Silver State Armory 110-grain Sierra Pro-Hunter—equating to no change in accuracy. The only noticeable change was how pleasant they were to shoot with the suppressor attached. Even with the longer barrels, the balance was solid. There was some gain in noise, given that this is a 7.62mm suppressor. But it was not noticeable. Having used suppressors now for a couple decades, they were plenty quiet.

In my experience, a .30-caliber “can” works pretty well even on a 5.56mm rifle, so there was little difference here. Just for effect, the suppressor was moved between the Wilson SBR Tactical 7.62×40 WT and the 6.8 SPC to see if any difference was noticeable. Honestly, there was no difference that could be discerned in the field. Maybe in a laboratory, but since most of us shoot in the real world, the difference is negligible. For all intents and purposes, it was the same.

Since the SBR Tactical is primarily an entry gun, testing was limited to 50 yards and closer, with significant focus on select-fire. Having never seen a solid suppressor have any negative effect on accuracy, little time was spent on group shooting. At 50 yards, ten shots were fired into the center of a 3-inch circle. That was excellent considering these were primarily my reloads. They were not loaded to match accuracy to begin with, so accuracy was certainly not an issue. After I removed the suppressor, I engaged the same target. The only real difference was the noise. The shots dropped a bit, but still stayed mostly in the circle. Given a combat situation, it equated to no change. On or off, this thing pretty much put them in the same spot. 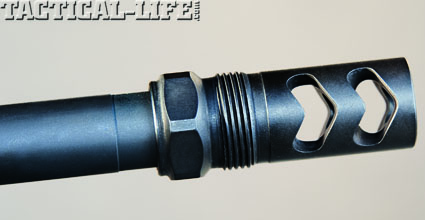 The Rapid Threat Muzzle brake works well by itself, with the commensurate noise level all muzzle brakes add to rifles.

Another benefit seemed to be the lack of gas in my face. Many suppressors used on gas impingement rifles seem to choke you to death, but this isn’t the case with the Whisper. That may have been the most pleasant surprise of all.

Wilson Combat has done a great job here with this design. It is available in 5.56mm, 6.8mm, 7.62mm and 9mm. If you are like me and have several calibers, get the big bore and a brake to go on each rifle—it will work fantastically. If not, any of them will be the perfect addition to your tactical rifle.