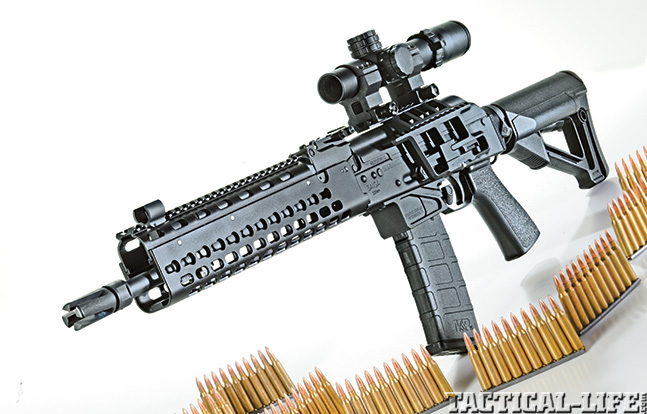 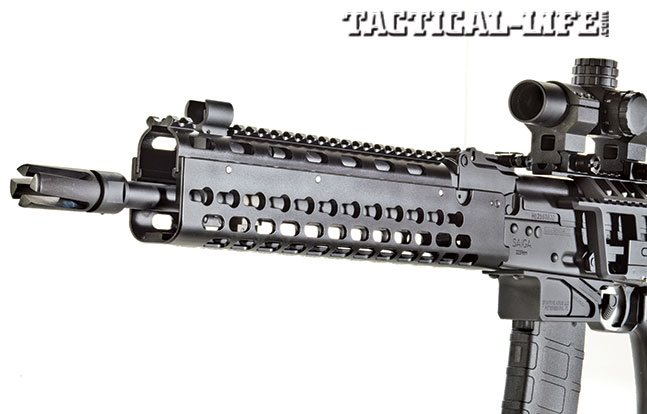 2 of 6
Definitive-Arms1
The Definitive Arms Kalashnikov System conversion adapts 5.56x45mm AK rifles to accept AR-pattern mags for the best of both worlds. Shown with a Weaver Tactical scope. 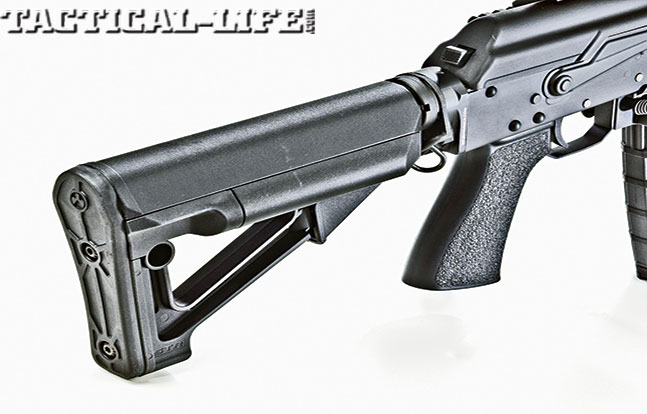 3 of 6
Definitive-Arms2
The Magpul collapsible polymer stock is very comfortable and offers six positions for length of pull adjustments. 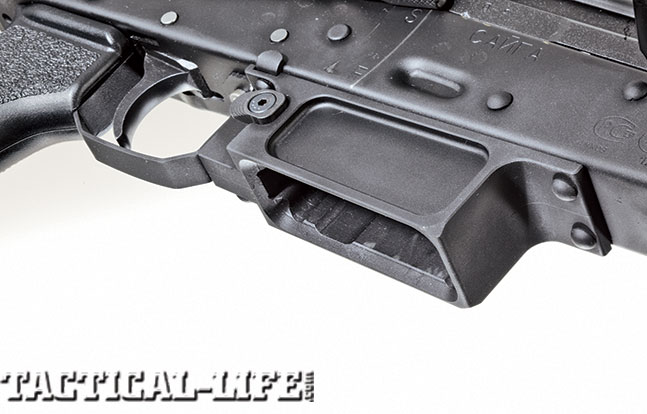 4 of 6
Definitive-Arms3
The mag well adapter is riveted onto the receiver and features a large, button-style mag release located just forward of the triggerguard. 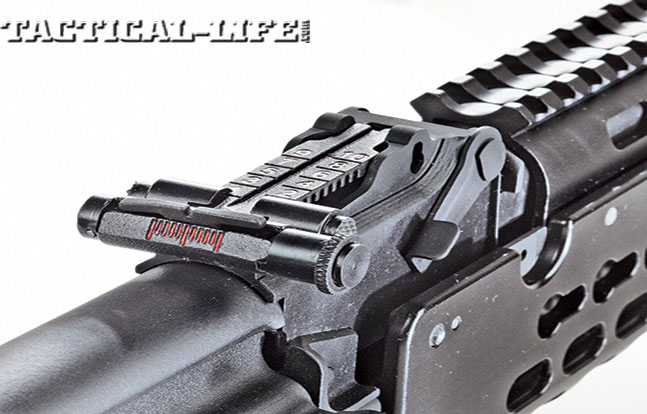 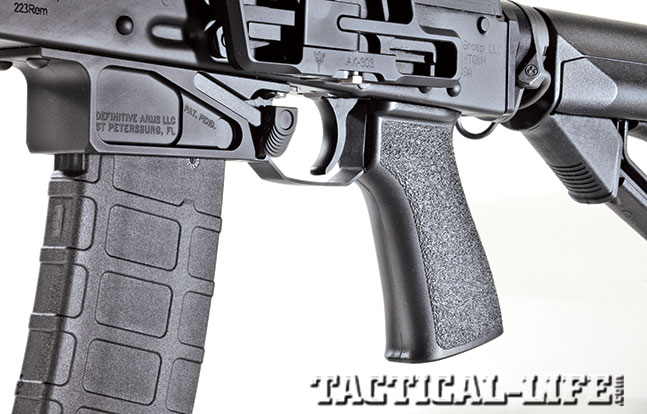 6 of 6
Definitive-Arms7
The bolt hold open device locks the bolt to the rear on an empty mag. Push down to lock the bolt and push up to release it. 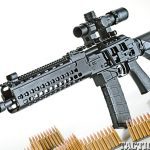 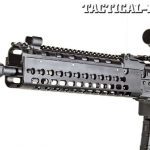 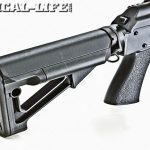 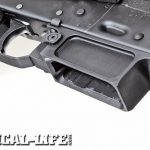 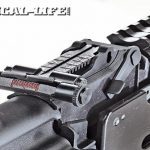 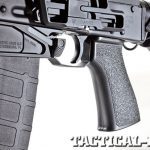 For many fans of the AK, the rifle is perfect as is, no need for any further improvement or debate. AK users simply have to accept that the basic design of the rifle is almost 70 years old and that it was built by a nation not known to prioritize ergonomics or end-user comfort. It is simply a matter of adapting yourself to the rifle, not the other way around.

But this is America, and we like to have options. Consequently, there are very skilled craftsmen who specialize in bringing the AK into the 21st century, kicking and screaming if necessary. Definitive Arms out of St. Petersburg, Fla., is one of these service providers, and it has also developed its own very innovative improvement.

For those who own AK variants chambered in .223/5.56mm, the company offers their Definitive Arms Kalashnikov Conversion System, which allows for the use of standard AR magazines. But this is far more than a simple adapter. This system is solidly built from CNC-machined 4140 steel and permanently installed. It provides a last round bolt hold-open and manual bolt hold-open, a simple push-button bolt release and a drop-free/push-button magazine release.

For those of us who cut our teeth on the AR, it is the magazine change system that is hardest to master when switching to an AK. The Definitive Arms conversion makes magazine changes virtually identical to the AR, and much faster and easier. You can send in your AK for this treatment easily enough, and each rifle is individually machined and fitted with a proprietary feed ramp for maximum reliability. The system has only two moving assemblies, the magazine catch and the bolt hold-open. If the bolt hold-open fails, the rifle will continue to function as normal. The entire system, factoring in the lighter weight of AR magazines versus AK magazines, only adds a total of 3 ounces to a loaded rifle.

Definitive Arms sent me one of their completely tricked-out AKs for testing, and the results were indeed as they promised. The adapter (magazine well) itself is riveted onto the receiver. There is a large, push-button magazine release on the right side in front of the triggerguard, similar to where it is located on an AR. The slide lock/release lever is on the left side, just in front of the triggerguard, allowing it to function in a manner opposite of a standard AR-style rifle. To lock the slide to the rear, you push the lever down, and you push it up to release it.

There is little chance of confusing the two tabs despite their very similar appearance since they are located on opposite sides of the rifle, and one is a button and the other a lever. As the magazine adaptor extends downwards, similar to an AR magazine well, it is also possible to use a modified shooting position with the magazine well serving as an impromptu forward grip.

That said, the rifle itself, a Russian-made Saiga, shows exemplary custom work and attention to detail on par with the best I have seen from other custom builders. The rifle features an original Russian hammer-forged barrel with a 1-in-9-inch twist rate that has been cut down to 14.5 inches and target crowned. Definitive Arms topped the barrel off with a permanently affixed Smith-Vortex flash suppressor for a legal, 16-inch total length. This makes the AK extremely compact and handy in the field.

There is a Venom Tactical front sight/gas block that has been pinned in place and a modified Krebs Custom Keymod extended aluminum rail. This provides maximum versatility for adding accessory rails and is both extremely comfortable and very effective at protecting the hand from barrel heat. The rear sight is located in the usual place but has been replaced with an RPK rear sight from AK Builder that’s adjustable for windage and elevation. Definitive Arms also included an RS Regulate low rise scope mount with a quick-detach feature for the AK Side scope rail.

The remaining standard AK furniture has also been replaced. The pistol grip is the U.S. Palm Battle Grip, which is larger and offers a better grip and includes internal storage space for batteries or small parts. Saigas are imported in sporting configuration and remanufactured with U.S. parts to be 922r compliant. This involved moving the trigger farther forward to install a proper pistol grip. The RAM STG2 bolt-on triggerguard is a very attractive way to make this change a lot easier and it can be removed to provide access to the rear of the magazine well conversion in the event it needs to be disassembled.

U.S.-made AK triggers tend to be an afterthought for many builders, and I commonly experience trigger slap and other issues, especially when firing from a benchrest. However, Definitive Arms instead installed an outstanding Power Custom adjustable AK trigger. This can be set for single or two-stage and is adjustable for overtravel and pull. The sample received was set for a light, 4-pound, two-stage feel. On the range this helped accuracy greatly.

The entire rifle has also received premier treatment. All of the internal components, including the bolt and carrier, have been polished and refinished. The rifle’s exterior has also been refinished in Definitive Arms Black, a very smooth matte black application.

Chase Sisgold started Definitive Arms with his father as a small family-owned business in 2009. “I often get people who ask me, ‘Instead of trying to turn the AK into an AR-15, why not just buy an AR?’ The intent was not to make the AK into an AR, but rather to combine the reliability and simplicity that is the Kalashnikov rifle with the convenience and availability of the most commonly found American cartridge and magazine, that of the AR. This also allows the average American shooter to maintain a more efficient and familiar manual of arms,” he said.

The system worked perfectly well and magazines fit properly and easily into the magazine well. They dropped free when the magazine-release button was activated. They always locked the bolt to the rear on an empty magazine (and it stayed to the rear when the magazine was extracted). All rounds fed reliably from the magazine and ejected briskly during slow-fire, rapid-fire and benchrest shooting, with no malfunctions save for the caveat mentioned below.

In testing this conversion system I found only one exception in its reliability. Definitive Arms has tested its conversions with a number of different AR magazines. I used both Magpul PMags and aluminum GI magazines in 20- and 30-round capacities with no issue. However, when I tried a steel AR magazine, I encountered several malfunctions, most commonly double feeds. The company explained that some steel magazines had issues with their system.

The other issue is that the.223/5.56mm round produces much higher chamber pressure than the 7.62x39mm cartridge. Also, the long-stroke piston system of the AK results in a great deal of mass moving during cycling, which can result in cases being extracted with a significant amount of force. In my experience, every fired primer showed cratering, which I have seen with 5.45x39mm AKs. However, as long as the primer isn’t pierced, this is not a major concern.

The stress placed on the cases manifested itself when I experienced two separated brass cases. I spoke with Definitive Arms at length regarding this issue. Their recommendation was to thoroughly clean the chamber before switching between steel- and brass-case ammunition.

I conducted all of my testing with no maintenance, and indeed I was switching between steel-case and brass-case ammunition. It was only after shooting the steel-case ammunition that I had ammunition malfunctions with brass 5.56mm ammunition. It should be noted that this does not appear to have anything to do with the magazine conversion system or the work Definitive Arms performed on the rifle.

Small custom builders like Definitive Arms have always been a great source of innovation and creativity in the American gun-making tradition that is found almost no place else in the world. This high level of attention to detail and commitment to quality and customer service is hard to find in large mass production, so the growth and success of custom builders benefits us all. Definitive Arms is a full-service shop for all of your AK needs and offers prompt service and competitive pricing as well as real expertise in the AK platform. 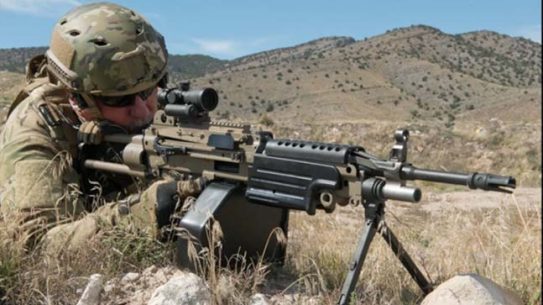