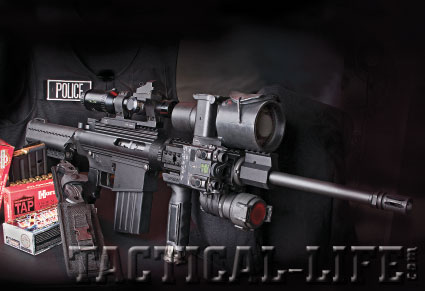 The latest .308 carbine from DPMS (Defense Procurement Manufacturing Services) is a mix between the full tactical version and “civilian” sporting version. The “7.62NATO Sportical,” a name derived from the combination of sporting and tactical, includes a collapsible buttstock and threaded muzzle to accommodate muzzle devices such as sound suppressors. The upper receiver on the Sportical is carried over from the original DPMS’s .308 and has no ejection port cover or forward assist, neither of which is necessary. This latest version of DPMS’s .308 carbine is sure to attract law enforcement users. 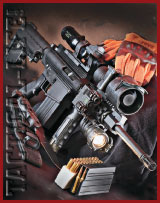 The 7.62NATO Sportical is a 16-inch (17.5 inches with muzzle brake) barreled version for close and intermediate range tactical use. We prefer a .308 to a .223 carbine for general patrol use because of the .308’s superior terminal ballistics.

The US military has run into lethality issues with its M-4 carbines in Afghanistan and Iraq because short-barreled carbines do not develop sufficient velocity to cause the bullets to upset when enemy combatants are shot, resulting in the development of the 6.8x43mm Special Purpose Cartridge (SPC) round. The .308 is a superior anti-personnel and anti-materiel weapon to either the .223 or the 6.8mm.

The 7.62NATO Sportical .308 carbine has the same lower receiver as their other .308 caliber rifles. The lower receiver is milled from a solid billet of 6061-T6 aluminum, hard coat anodized to military specification and Teflon coated. The fire controls are standard AR. The upper receiver is an unstressed component and is a thick-walled 6066-T6 aluminum extrusion, again hard coat anodized per military specification (Mil-Spec) and Teflon coated. The upper receiver is from the original DPMS LR .308 and lacks the forward assist, case deflector and ejection port cover from the LR-308 tactical. The stock is an M4 collapsible type with DPMS Pardus stock, which is an improvement over the original, but in setting up our test carbine to our individual tastes, we changed the original for a VLTOR Modstock, available from Brownells.

Accessory Compatible
While DPMS GlacierGuards improve on the originals, tactical carbines for law enforcement use must be capable of accepting a variety of white lights, lasers and night vision optics for operations in darkness or limited light conditions. For that reason, we obtained a Command Arms Accessories (CAA) MIL-STD-1913 rail handguard designed to fit an M4-type carbine. The DPMS Sportical is fully compatible with M4-type handguards and stocks, so any Mil-Spec handguard or stock should fit. The receiver rail is slightly higher than the handguard MIL-STD-1913 rail, but this didn’t affect our use of the AN/PVS-22 night vision optic. The rifle’s stock is standard collapsible AR in the current 6-position configuration to accommodate different shooters and whatever gear they might be wearing.

There are no sights provided. Most users of this carbine will provide their own optic. We prefer optics to open sights, because most optics are faster on target than iron sights. With open sights, the shooter’s eye must focus on three elements: the rear sight, the front sight and the target, which can be partially overcome with intensive training, but most police officers do not train to such levels. Moreover, there are two components of aiming with open sights: sight alignment and sight picture. With optics, all that is necessary is to superimpose the properly zeroed reticle over the target and squeeze the trigger. Sight alignment is automatic and the speed of target acquisition is dramatically increased. For those with vision issues, optics are a virtual necessity.

Horus Vision Talon
Our test optic was Horus Vision’s 1-4x “Talon” close quarters battle (CQB) to mid-range scopes. Horus Vision long-range scopes are widely used by Army Special Forces and have proven themselves in combat in Afghanistan and Iraq. The Talon has also seen combat use in Afghanistan. One Special Forces officer who uses the Talon stated that his M4A1 carbine had been dropped, mortared and slammed into the ground repeatedly, but the Talon never lost its zero and remained fully functional throughout his entire tour in Afghanistan.

The Talon is an extremely effective optic for close to mid-range engagements from CQB distances to approximately 400 meters. The same officer who praised the Talon’s reliability had a 275-meter (approximately 330 yard) headshot kill of a Taliban combatant using his Talon-equipped M4A1 at 4x. The Talon reticle consists of a one minute of angle (MOA) central dot surrounded by a bold “ghost ring” with a modified Horus Vision reticle within the ghost ring. The ghost ring subtends approximately 60 MOA.

Like all Horus Vision optics, the reticle is in the first focal plane, so the milliradian-based reticle can be used for ranging at any magnification. The Talon’s medium distance eye relief is such that the shooter can quickly sight with both eyes open with alignment onto the target virtually instantaneous. At CQB distances, the Talon is used at 1x and targeting is within the ghost ring. The central dot is almost invisible. At mid-ranges out to 300 meters, magnification is increased to either 3 or 4x and the ghost ring instantly draws the shooter’s eye to the central aiming dot.

The Talon features numbered “lead markers” on the horizontal crosshair that indicate a fast walk, a running man, a sprinting man, and the 20 mph cross-country speed of a tracked vehicle. The reticle is illuminated for low-light use and the Talon is fully compatible with all night vision devices, such as the AN/PVS-22 Universal Night Sight.

SureFire M900
We also installed a SureFire M900 Vertical Foregrip WeaponLight with an optional infrared (IR) filter. This versatile foregrip/high intensity light has ambidextrous momentary activation pads for the main battle light, a constant on switch and a momentary push switch for the two integral low-output LEDs that are used for stealth navigation. This light emits 125 lumens of high intensity focused light for an hour and attaches to the bottom MIL-STD-1913 rail via a LaRue Tactical QD throw lever.

All night vision optics work on amplification of ambient light; they aren’t effective in total darkness like inside unlit building interiors. The SureFire IR filter is placed over the M900 lamp lens, enabling the carbine user to clear using IR light that is invisible to the human eye. Of course, IR can be detected by other night vision optics, but the IR SureFire coupled with the AN/PVS-22 is about as good as it gets.

Range Time
Shooting the DPMS 7.62NATO Sportical brought no surprises. The big AR handled just like any other of its breed. Although it is heavier than a .223 caliber AR, the Sportical handles well. The center of gravity is at the magazine well, which enhances handling and pointing characteristics. The single-stage trigger is typical service grade AR, 6.5 pounds with a clean break, no creep and some overtravel. The Sportical as we tested it isn’t a match or precision rifle, but a tactical carbine. If one is seeking a match grade precision rifle, the DPMS Long Range .308 delivers the goods.

Our accuracy tests with the short-barreled Sportical were about what we expected using match grade ammunition with bullet weights ranging from 155 to 168 grains. Recoil was easily managed and muzzle rise minimal for a .308, facilitating quick follow-up shots. We had no ammunition with heavier bullets, but since the Sportical is rifled with a 1-in-10-inch twist, we would expect to achieve better accuracy with 175- or 180-grain bullets. This is not to say that it is inaccurate, it is as accurate as any service carbine we have ever tested. Heavier bullets and a match grade trigger might improve accuracy, but as a tactical carbine, DPMS 7.62NATO Sportical leaves nothing to be desired.

We test fired the Sportical at 100 yards distance, although the vast majority of law enforcement long gun engagements will be at far closer distances. A rifle that shoots well and is zeroed at 100 yards will do well at closer ranges. Group sizes were similar regardless of the ammunition we used. All delivered excellent accuracy under the circumstances.

Final Notes
DPMS’s 7.62NATO Sportical is an excellent choice for anyone desiring a .308 semiautomatic carbine. Whether for patrol, SWAT or personal defense use, the DPMS .308 Sportical carbine combines the features of the .308 caliber AR at a reasonable price. With its 16-inch barrel, reliability, effectiveness and adaptability, it is a carbine that can be used in virtually any environment and deployed with confidence. At typical law enforcement engagement ranges of less than 100 yards, it is deadly accurate and totally reliable.