As more law enforcement agencies become enlightened to the necessity of having long guns, not only in the given role of tactical teams, but of first-responding patrol officers, so the call for these arms continues to grow. Consequently, manufacturers of the AR15, easily the most dominant long gun in our military and police alike, have sprung up everywhere to meet the demand. As a rep for one manufacturer recently told me, one cannot swing the dead cat nowadays without hitting a maker of AR15s. The task at hand for police is to sift through this plethora of companies to determine which are the best and represent the best value in the business.

DPMS Panther is a company savvy enough to recognize this quandary and seize the opportunity to the benefit of both their own livelihood and that of the cop on the street. In early 2006, The Agency model was introduced in response to requests from law enforcement agencies throughout the US who wanted a package with specific features that they most often requested as upgrades. A Mangonel flip-up rear sight, EOTech 512 Holosight, SureFire flashlight and four-railed handguard, ERGO Ambi Grip, ambidextrous safety and a two-stage trigger were the most requested upgrades to their standard RFA2-AP4A carbine. There’s a bit more to it than that, as we shall see, but in a nutshell, this list comprises all of the crucial features of a well-rounded patrol rifle.

Gun Details
The Agency’s upper receiver is an A3 flattop from a 7075-T6 aircraft aluminum alloy forging. The front sight is the customary A2 sight tower with an elevation-adjustable post. The rear sight is a proprietary Mangonel flip-up that locks solidly into the “up” position. Augmenting and co-witnessing the iron sights is an EOTech HDS (Holographic Diffraction Sight) Model 512. A tactical charging handle latch is installed.

The lower receiver is machined from the same alloy forging; a two-stage trigger is installed and an ambidextrous safety. The pistol grip is a finger-grooved ERGO Sure Grip from Falcon Industries. Both receivers are hardcoat anodized per Mil-Spec and Teflon-coated black. Captured crosspins join the two halves, a convenient arrangement when field stripping and re-assembling. The bolt carrier is 8620 steel, heat treated and plated per Mil-Spec; the bolt itself is phosphated steel, heat treated and plated per Mil-Spec.

The tube for The Agency is a 16-inch 4140 chrome-moly steel manganese phosphated unit, button-rifled with six grooves with a right-hand 1-in-9-inch twist. A standard A2 “birdcage” flash suppressor is attached at the business end. Chrome-lined bores and chambers are optional on almost all 5.56mm rifles and carbines including The Agency. A military 5.56mm chamber allows for the shooter to safely fire both the higher chamber-pressure 5.56mm and .223.

The butt stock is a DPMS Pardus Carbine stock, a six-position collapsible that adjusts the overall length from 32.5 to 36.38 inches. The construction is space age, lightweight fiber-reinforced black Zytel with a curved sawtooth buttplate and a Monte Carlo-style cheek rest.

A SureFire oval, carbine-length M73 quad rail with a delta ring allows for the attachment of an abundance of accessories, although the Agency ships with a SureFire M951XM flashlight. The quad rail is fitted with rubber rail ladders, which make the weapon much easier on the hands during firing, especially during long-range sessions or extended tactical situations. The rifle ships in a foam padded hard case with two 30-round magazines, a nylon web sling and a cleaning kit.

Upon receiving an Agency rifle for test and evaluation, a thorough looking-over revealed a tight AR15 with very good fit and finish. We couldn’t manage any wobble between the upper and lower receivers.

Range Time
Accuracy was evaluated on a 100-yard range with three-round groups rested on a sandbag perched atop a bench. We used 8-inch VisiColor targets from Champion Traps & Targets, which make visual analysis through a spotting scope a much easier task at range.

The day we did our range test was about 94 degrees Fahrenheit at 30 percent humidity with 15 mph winds. There was nary a cloud in the sky and the sun was blazing. Prior to going to the range, we’d affixed the EOTech to the Picatinny on the receiver using the included thumbscrew. (A hex head screw and appropriate wrench are also included.) Getting down to business, we began by firing a group onto a man-sized silhouette, since we had no idea where the rounds would impact. As luck would have it, not only did the first three rounds of Winchester 55-grain FMJ cluster into 1.31 inches, but they impacted only about an inch left and 8 inches high. A few clicks and two more groups got the impacts almost dead center. It was time to move on to the 8-inch targets.

Ironically, the very first volley out of the gun with the Winchester ammo gave us the best group of the day. Next in line was Black Hills 60-grain V-Max at 1.31 inches, followed by 55-grain CorBon BlitzKing at 1.5 inches. Black Hills’ 68-grain Heavy Match HP and Federal Powershock 55-grain FMJ BT both tied at 1.56 inches. Average for all groups fired was 1.46 inches. We felt that more accuracy could have been wrung out of The Agency using a telescopic scope, but we shot the gun as intended, configured with the EOTech. Considering that the dot itself is 1-MOA (and seemed a bit larger in the sun since we necessarily turned its intensity up), that’s pretty good.

The trigger was great, with about a quarter-inch of play until resistance was felt and then the break came crisply at 4.5 pounds, though it felt like less. If anything were to pull the sights off target, it wouldn’t be the trigger.

The tactical charging handle latch was something new to me, but it was more user friendly than the standard handle. Ripping the jutting handle from the left would be much faster under the stress of a firefight, and one could easily find it without taking their eyes off the target—even without practice. Since I’m used to firing an FAL, the left-mounted handle seemed natural.

The ERGO Sure Grip was comfortable in the hand with its fat finger-grooved contour and spongy, tacky surface. As mentioned, the M73 quad rail in addition to making an endless array of accessories easily possible was comfortable to grasp with the included rubber ladders in place. The ladders slip over the Picatinny rails, covering the sharp edges. Holding and firing a rifle with bare quad rails for extended training sessions or tactical situations can be like holding a porcupine.

Adjustable lengths-of-pull (LOP) are important for a law enforcement rifle for two reasons. First, because all men and women really aren’t created equal: We come in all shapes and sizes. What’s proper LOP for one officer may not be for another. Secondly, the length that suits you in shorts and a T-shirt will be too long in a vest and uniform. The Pardus Carbine Stock is adjustable to six telescoping positions, allowing for the aforementioned variations in anatomy and gear.

Like most ARs, The Agency was quick and natural to point from the shoulder; it was quick to recover between shots and quite controllable during rapid-fire at close quarters. Despite the fact that we took the weapon right out of its hard case without lubing it, The Agency never failed to feed, fire or extract during our tests; it ran 100 percent reliably, and that is perhaps the most important component of any gun to which you may have to trust your life or those of your team mates.

Final Notes
We found The Agency to be ready to go from the outset. All one has to do is affix the EOTech and the M951XM SureFire, zero the gun, and it’s geared up and good to go. A red dot and tactical light will allow an officer to manage any situation from engaging an adversary in daytime to lit or low light situations or darkness. The Agency does it all with good ergonomics, good accuracy and flawless dependability and that’s all anyone can ask of a duty rifle. 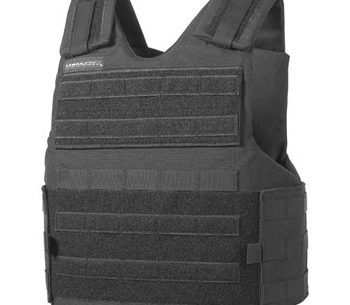 As more law enforcement agencies become enlightened to the necessity of having long guns,…