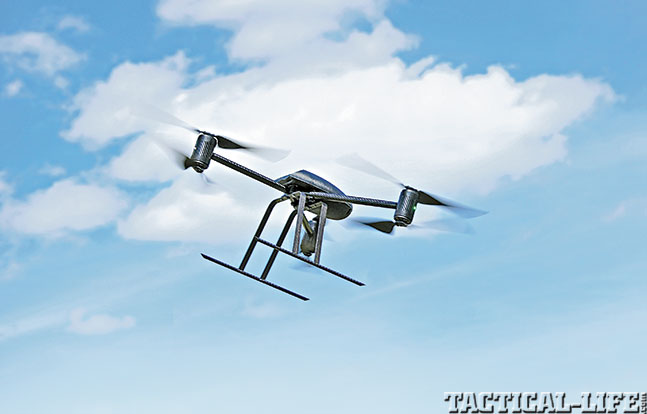 1 of 3
Eye in the Sky: Moden UAVs For Reconnaissance
Draganfly Innovations X-6 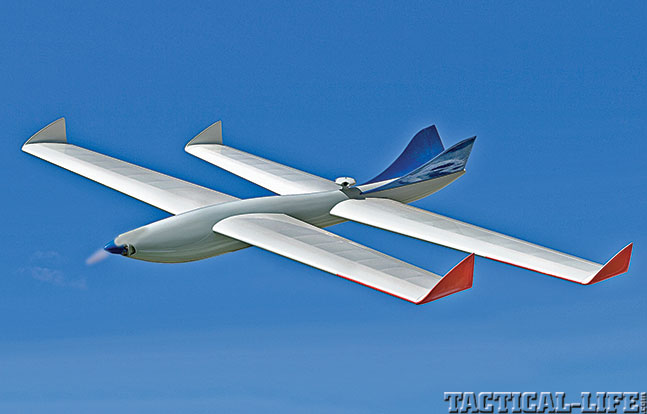 2 of 3
Eye in the Sky: Moden UAVs For Reconnaissance
Draganfly Tango fixed-wing UAV 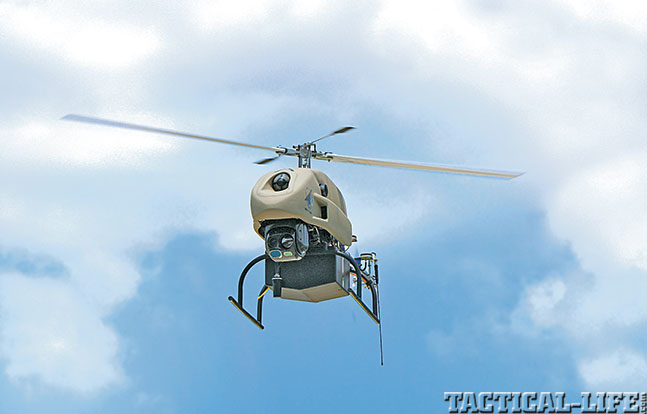 3 of 3
Eye in the Sky: Moden UAVs For Reconnaissance
Vanguard Defense ShadowHawk 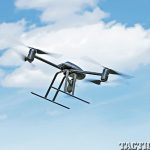 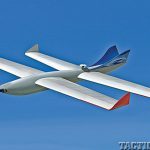 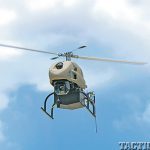 It’s no secret that aerial reconnaissance and surveillance has played an important role in both military and law enforcement operations worldwide for decades now.

Using air support to identify and track subjects of interest and personnel on the ground, while relaying important information to central command, has proven to be an invaluable asset in determining strategy and keeping operatives safe. The latest advancements in aerial surveillance technology have not only dramatically reduced the overall size of the aircraft required to perform such detail, but they have also removed the need for a pilot to be on board—or even at the controls at all.

Routinely referred to as “drones,” these small unmanned aerial vehicles (UAVs) have rapidly taken law enforcement operations to new heights in the last few years. Resembling sleek, multi-rotor-powered, remote-controlled hobbyist aircraft, the new-school UAVs can fit into the trunk space of a police cruiser or SUV and usually host an array of specialized features for LEOs operating in the field. From cutting-edge camera arrays to advanced navigation and tracking systems, these rapid-deployment aerial surveillance units are far from being a child’s plaything. To explore how agencies worldwide are utilizing the technology, and where it may be headed, we spoke with two of the leading UAVs designers and manufacturers in the industry.

“In the last year, the uptick in [UAV] usage has been tremendous. We’ve worked with local, state and federal law enforcement in supporting a number of operations,” noted Michael Buscher, the CEO of Vanguard Defense Industries. With a 165-acre training facility based in Conroe, Texas, Vanguard has been developing and supplying military, law enforcement and commercial demands for UAV technology worldwide since 2008. Vanguard was even recently approached by the California Highway Patrol and the U.S. Customs and Border Protection agency for proposals and concept-of-operations reviews, so it seems the tech trend is clearly on the rise.

“… new-school UAVs can fit into the trunk space of a police cruiser or SUV and usually host an array of specialized features for LEOs operating in the field.”

With budgetary constraints and resource management routinely being scrutinized, an attractive feature of the overall UAV design is that they could actually save law enforcement agencies money. “They come to us as an alternative to their full-sized manned aircraft. They’re trying to do as much, if not more, with shrinking budgets. They can now achieve aerial surveillance while deploying the craft themselves from their vehicle within 15 minutes versus relying on a third-party air asset that may take hours to arrive on scene,” noted Buscher. According to the company’s website, the operating costs of Vanguard’s flagship aircraft, the ShadowHawk, are calculated at approximately “11 percent of a manned helicopter, which includes the difference in fuel costs/expenditure, maintenance and pilot pay.”

Beyond the benefit of lowering operating costs, a number of the ShadowHawk’s operating features further enhance personnel and public safety, including military-grade, GPS-based guidance features and fail-safes. Buscher said, “Our aircraft are what is known as ‘fully autonomous,’ which means that the aircraft can be launched, operated and recovered solely from a laptop. We can plug in up to 1,000 individual GPS waypoints, which are geographical locations the aircraft can be flown to on command, and it’s all GPS guided.”

In developing a UAV for public safety, Vanguard first approached the FAA in order to ensure compliances were met and to establish a cooperative and collaborative relationship when designing its systems. While taking the FAA’s considerations to the drawing board, at the same time, Vanguard approached law enforcement agencies around the country for their feedback on what would make a superior unmanned system. “At the end of the day, we sat down with our team of engineers, we combined those two lists and came up with an aircraft that met or exceeded LEO requirements and made the FAA exceedingly pleased with the way we met their requirements.”

Other features that define the ShadowHawk as a standout include its ability to maintain aerial surveillance of an area (i.e., a house, vehicle, person, etc.) at an altitude of 700 feet for up to 3 hours without being able to be heard or seen from the ground, unlike a full-sized aircraft. This presents a great advantage for an entry team executing a high-risk warrant, rescuing a hostage or other high-risk scenarios. The ShadowHawk also employs a Kevlar-reinforced fuel tank, which protects it in the event the craft should ever take ground fire. In such an instance, the militarized ShadowHawk is capable of firing back, with either it’s 40mm or 37mm grenade launcher or 12 gauge shotgun rounds, all targeting with laser designator systems. It should be noted that currently no U.S.-based LE agencies are employing lethal countermeasures in UAV designs, however, videos online have featured independent UAV designers successfully outfitting Tasers, gas canisters and non-lethal 12 gauge rounds to their crafts in controlled demonstrations.

The ShadowHawk’s aircraft-mounted, electro-optical camera, with its 36x zoom, is so powerful and versatile that it can zoom in and lock onto suspects below from 1,000 feet in the air and not only determine if they are armed, but whether or not there is a magazine in the magazine well of the weapon—and even identify the weapon’s make and model. All of this ultimately translates to officer safety. Operators can also flip a switch to “go thermal” with a FLIR camera for night operations. “The FLIR camera is so powerful and clear that when someone walks through an area you can actually see their footsteps for several minutes after, depending on the ambient temperature around them,” cited Buscher, regarding how the ShadowHawk was recently used during one suspect apprehension.

Vanguard has revealed that two new models are on the horizon, slated for release before the year’s end, including an electric, hand-launched, tri-copter model and a hybrid model of the ShadowHawk, which will be primarily hydrogen powered and should offer double the endurance of current models (up to six-hour flight times) as well as reduced heat and sound signatures. The tri-copter will be able to navigate hallways and interior spaces easily, and users can flip between the HD camera and thermal imaging systems, allowing it to detect otherwise invisible thermal handprints and footsteps leading from one area of a home to another. The UAVs will even be able to ascend vertically into crawl spaces and attics without risking an officer or K9’s life. This capability alone is a far cry from the heavy, loud and clunky ground-based “SWAT bots” of old, which are still in use today for EOD and recon in both the military and policing sectors.

Draganfly Innovations, based in Saskatchewan, Canada, began its journey within the UAV hobby sector but has since developed a number of unmanned aircraft now widely used by law enforcement, fire, and search and rescue operations worldwide. Kevin Lauscher, head of industrial sales and training, described how feedback from clients and public service agencies has allowed Draganfly Innovations to consistently improve its line of “Draganflyers” to carry heavier payloads and larger cameras, which are now being combined with advanced data-collecting, 3D-mapping, forensics analysis and crime scene software capabilities to aid in LE investigations.

Lauscher noted, “As more people dig into these systems and use the technology, it will become more accepted and the true value of it will be seen.” One such demonstration revealed how a single Draganfly unit can fly over a crash or crime scene and effectively “stitch” together a number of ultra-high-resolution photographs from multiple angles, combining them into what is called an orthomosaic composite 3D image. This 3D image allows investigators to virtually “walk the scene” later and zoom in on details within approximately 5 centimeters in astonishing clarity. According to Lauscher, the level of reliability, quality of data, ease of use and cost efficiency of the unmanned aerial systems are major factors that have driven interest from agencies worldwide.

Approaching and engaging suspects on the run often involves a high degree of risk for officers. Pursuing a suspect into the night can prove not only be challenging, but it can also be fatal. For LEOs everywhere, utilizing the best possible tools available within their agencies to ensure that they make it home to their families at the end of shift is priority one. In this respect, new UAV systems offer law enforcement agencies technologically stunning and formidable guardian angels. 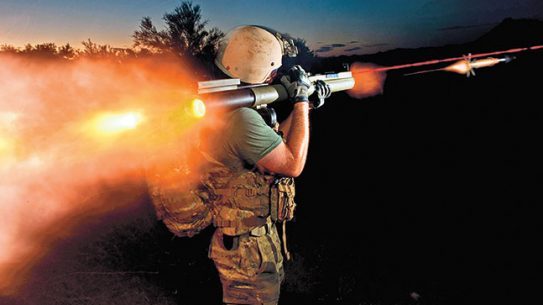