by Richard Mann
in Accessories, Gear
0

Most shooters think of firearms safety as rules and procedures to keep folks from getting shot. Obviously, there’s more to it than that, but when I was growing up, my firearms safety instruction amounted to an adult saying, “You better watch where you point that gun.” Times change, and with regard to firearms safety, they have changed for the better. Nowadays, it’s common practice to utilize ear and eye protection. But when I was 12, hunter safety was a graded portion of my seventh-grade physical education class. We shot clays on the ball field and loaded ammo in the gym. You won’t see that in schools any more.

Hard Lessons Learned
From the time I was about 12, my parents let me shoot and hunt on my own. Their warnings were always the same and were centered on me not shooting myself, anyone else or anything that was not in season. Not once did they ever suggest I use ear protection. I remember Grandpa saying, “If you’re not shooting, put your fingers in your ears. If you are shooting, the noise doesn’t affect you as bad.” Obviously, that was an old wives’ tale he believed. Grandpa was right about most things, but wrong about this one. 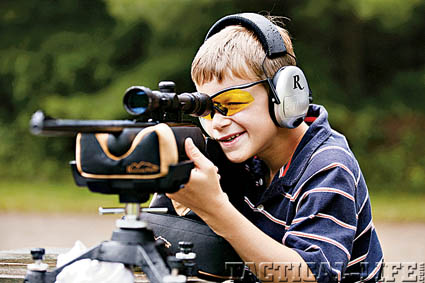 We never wore shooting glasses, either. This was mostly because there had never been an incident anyone was aware of where shooting glasses would have prevented some sort of injury. That changed when I was 14. My cousin and I were shooting an old rolling-block Remington .22. When I fired a shot, the hammer and the rolling block were blown back and my face was covered with powder burns; the rim had blown off the cartridge case. Luckily, my eyes came out O.K., but I’ve kept a pair of shooting glasses close ever since.

And, it’s been a good thing. On more than one occasion since then, I’ve experienced ammunition failures in handguns and rifles where debris and gas have been blown back into my face. I’ve also witnessed several firearms become permanently disassembled due to bad ammo or hot handloads. You can say that I was lucky in my youth to learn that eye protection is a very good idea when shooting.

I wasn’t so lucky with my ears. Due to repetitive exposure to small arms fire, I have a severe case of tinnitus. There’s always a ringing in my ears. All day, every day, it’s there. When I lie down in the quiet of night to sleep, it is much worse. So bad that I need some sort of white noise to mask the ringing. And, sometimes, for no apparent reason, it seems like my left ear has an earplug in it and I can hardly hear at all. The bad news is that there’s no cure. I’m stuck with this for the rest of my life.

Kids or new shooters do not have to experience tinnitus, however. All they need to do is wear ear protection when they shoot. Their eyes should also never be the victim of bad ammo or a firearm failure. With quality protective shooting glasses they can avoid a painful, disabling injury.

There are some things to consider when it comes to selecting ear and eye protection for youngsters, like the level of protection, fit and comfort, compatibility and looks. Let’s examine each of these separately.

Two organizations set the standards that most ear and eye protection manufacturers adhere to: the American National Standards Institute (ANSI) and the Environmental Protection Agency (EPA). ANSI has established a rating system for ballistic impact when it comes to protective eyewear. And the EPA rates hearing protection based on decibel reduction. 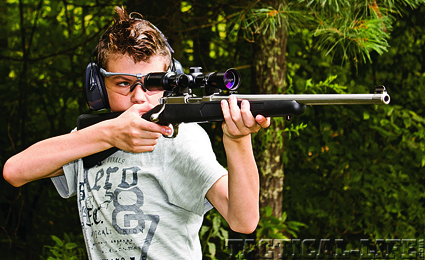 The EPA rates ear protection based on decibel reduction. The actual amount of noise reduction offered by earmuffs or earplugs will not likely be listed on the product, but you should be able to find it on the packaging. The minimum level of reduction you should accept is about 22 to 23 decibels. I say “about” because the actual noise reduction provided can vary based on fit and the way the product is used. More protection is always better.

That’s where fit and comfort come into play. Hearing protection that fits too loosely will not provide the level of noise reduction needed. Just the same, protective eyewear that does not stay in place during recoil, or that may slide down the nose while shooting, can fail to block debris that could potentially cause an injury. And if it is not comfortable for the kid to wear, they may not wear it properly or at all. For example, when wearing hearing protection and eye protection at the same time, a youngster may find that the earmuffs uncomfortably press the arms of the shooting glasses into the side of their head. Experiment with combinations before buying.

Compatibility is also important. Some hearing protector muffs have large ear cups. Depending on the rifle a kid is shooting and how it fits them, the ear cup may get pushed away from the ear by the rifle stock. Compatibility issues also need to be considered with shooting glasses. That’s why there are so many different colored lenses available.
Clear lenses are generally the best option, but in bright sunlight a smoked lens can eliminate eyestrain and yellow lenses help the eyes see better during overcast conditions. You should also consider the UV-reduction capability of the lenses. Remington offers several, very affordable shooting glasses sized just for small heads and they are available with clear, yellow and smoked lenses. It’s a good idea to keep at least one of each in your shooting bag so that the protective eyewear can be matched to the shooting situation.

What about looks? Most guys will not think looks matter, but trust me, your kids don’t want to look like geeks. This goes for both ear and eye protection. Let your youngsters pick out their own eye and ear protection—something they think looks neat. Pro Ears has taken a great step in this direction with their Passive Revo 26 Youth muffs, which are available in a wide range of colors and patterns. 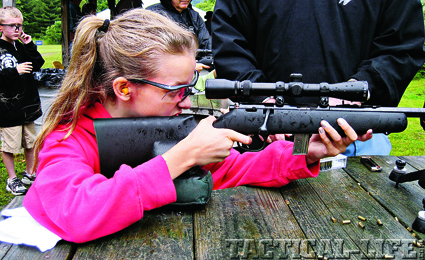 When selecting hearing and eye protection, care should be taken to assure that the units will be compatible with the rifle and the kid who will be shooting it.

What about electronic ear protection or earplugs? Most kids will find earplugs intrusive and may not like to wear them. They are better than nothing and when shooting a rifle with a muzzle brake it’s a good idea to make them use both plugs and muffs. SureFire’s Sonic Defender ear plugs are some of the best I have used and are available in different sizes.

As for electronic hearing protection, they can make communication on the range and while hunting much easier and even safer. These devices are battery operated and allow you to hear fellow shooters talking at normal levels, but their circuitry offers protection from noises—like gunfire—ranging from 19dB to 31dB (dB = decibels). There are plenty of styles and price ranges to choose from. Do your research though, because you’ll get what you pay for, and be sure to consider how kids might treat such delicate, and costly, devices. I’ve had more than a few different models quit on me in less than a year. Then again, I’m a kid at heart.