0
SHARES
31
VIEWS
Share on FacebookShare on Twitter
Tundra-SV’s MultiMount assembly is easily disassembled for cleaning or for changing pistons and adaptors.

When Gemtech opened their doors in 1993, they were a new company but not new to suppressors. The founders had many years of experience combined with a progressive approach to manufacturing. “Through the use of CNC machines and robotic construction methods,” the company quickly became a leader in the industry. Since that time, Gemtech has experienced tremendous growth and has built a loyal list of clients from government and military organizations to the general public.

Tundra-SV Details
Gemtech offers a full line of suppressors for pistols, rifles and personal defense weapons. For several years, the workhorse for 9mm pistols has been the Tundra, which is designed as a high-performance dry suppressor. As with most suppressors, its sound reduction can be boosted with a small amount of ablative or coolant. With a length of 7.2 inches, a diameter of 1.25 inches and a weight of 8.5 ounces the Tundra is smaller than comparable suppressors like the AAC Ti-Rant or the SWR Octane. Both the outer tube and the baffles are manufactured from aircraft-grade aluminum and finished in a MIL-8625 hard-anodizing. The blast baffle is constructed of titanium for increased durability. Gemtech redesigned the booster, or Linear Internal Decoupler recoil enhancer (LID), to allow the unit to be tuned so as to minimize the point-of-impact shift. 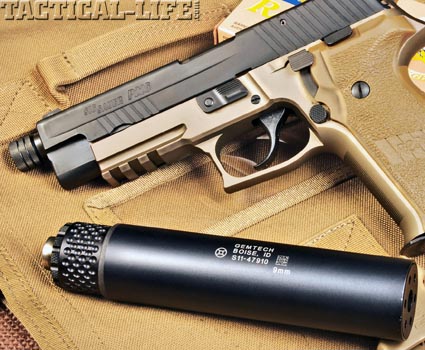 The Sig Sauer P226 has been the pistol of choice for the U.S. Naval Special Warfare Units for many years—it’s battle proven. The Tundra-SV is the perfect accessory for covert missions.

The Tundra has proven popular among law enforcement and military units and has seen operational deployments around the globe. While Gemtech does not release its customer list, a company official stated that several large orders were recently delivered to military units in the Pacific Rim. He was quick to point out that these are allies, and all exports fully comply with State Department regulations. It is safe to say that the Tundra is helping protect democracies around the world.