On June 2, 1995, a United States Air Force F-16 Falcon was shot down over Bosnia while enforcing a NATO peacekeeping mission. The pilot, Captain Scott O’Grady, ejected safely over enemy territory. For six days, he used the lessons learned in Survival, Evasion, Resistance and Escape (SERE) training to avoid capture. On June 8, Marines from the USS Kearsarge launched a rescue mission that brought O’Grady home.

At the time, it was heralded as the most successful combat search and rescue (CSAR) mission since Vietnam. In fact, it was very reminiscent of the “Bat 21 Bravo” rescue mission where, for 11 days before his rescue, Lt. Col. Iceal Hambleton avoided capture by the Viet Cong. In both cases, had the pilot been required to use his pistol, it would have compromised his position and put him at a higher risk of capture. What these pilots needed was an ultra-compact suppressor that would allow them to holster a pistol with the suppressor mounted.

In 2014, I had the opportunity to visit Gemtech’s manufacturing facility in Boise, Idaho. We were in the arms cage packing for a range trip when I noticed a plastic tray with 10 or so very small suppressors not much larger than a tube of lipstick. Being the polite guest, I asked about them before touching them! What I had found was a batch of Aurora 9mm suppressors awaiting transfer to a government end-user. I was told that the Gemtech Aurora was designed in the mid-1990s for a pilot’s bailout kit and has since been utilized by other “government entities.” The concept was to provide signature reduction in a reduced package that would be effective for 5 to 15 rounds. Gemtech’s Blake Young stated that the internal components consisted of old-school neoprene wipes and aluminum spacers. This immediately made me think back to the days of Mitch WerBell and his SIONICS suppressors. That is the kind of story that intrigues me. At the time of my visit, the project was still “sensitive,” and the information was embargoed.

In early 2016, I paid a second visit to Gemtech. By that time, photos had been “leaked” on the Internet from a demonstration and the Gemtech Aurora was out in the daylight. I also learned that a small number of the units had been released to the commercial market through The Silencer Shop in Austin, Texas. I spent some time in the research and development department getting a close look at the Aurora and trying to figure out a good reason not to order one.

The Gemtech Aurora is a mere 3.3 inches in length and 1.13 inches in diameter, and it weighs 3.2 ounces. Internally, the Aurora has eight neoprene wipes that are tightly packed in the tube with aluminum spacers between each wipe. The wipes are coated with lithium grease when the Aurora is “packed.” The size and light weight of the Aurora eliminates the need for a booster or Nielsen device. The Aurora can also be serviced and repacked in the field by the end-user in a matter of minutes. However, the BATFE considers the internal wipes and spacers to be suppressor components, making them controlled items for civilian users. This limits the Aurora’s use by all but the most dedicated NFA enthusiasts.

During my more recent visit, I had the opportunity to spend a good part of a day with Dr. Phil Dater, who is known by many in the industry as the father of modern suppressors and is one of the founders of Gemtech.

A full day of sound testing was scheduled to include the Gemtech GM-9, GM-22, Sandstorm and Tracker. I also asked to shoot an Aurora. I used my Glock 19 Gen4 with a threaded S3F Solutions barrel as a host.

I had brought along a box of HPR EMCON 9mm subsonic ammunition for the test. Using proprietary HyperClean technology, this line of ammunition is specifically designed to reduce the sound signature and fouling. Currently, EMCON ammunition is available in 9mm, .40 S&W, .45 ACP, and 300 BLK. In previous testing, I have found that EMCON loads are both accurate and consistent.

On the range, we metered the Aurora using a fixture that Dater had built to ensure proper protocols are followed when measuring sound signatures. Without a suppressor, the 147-grain EMCON FMJs averaged 856 fps with a sound signature of 159.9 decibels. Using the Gemtech Aurora, a five-shot group averaged 129.5 decibels—that’s a sound reduction of 30.4 decibels. The first shot registered 132.25 decibels, with subsequent shots becoming quieter. The fifth shot in the string registered just 128 decibels.

We compared the Aurora to the GM-9 suppressor. Using the same ammunition, the GM-9 averaged 133.1 decibels when shot dry and 131.7 decibels when prepped with Vaseline as an ablative. The downside was that the Aurora produced a significant amount of blowback debris. Still, I was very impressed and spent the entire flight home talking myself out of ordering one. 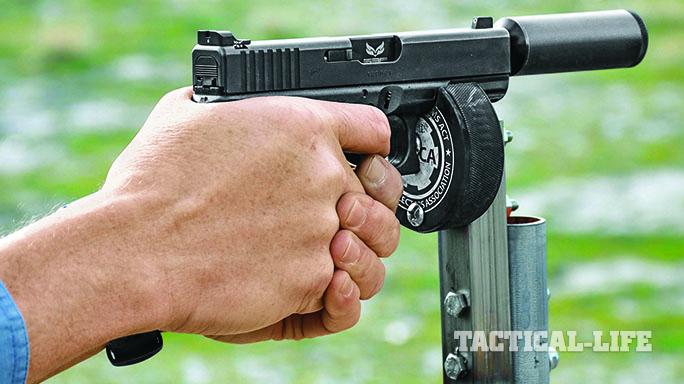 The Gemtech Aurora is one of those special-purpose items that makes for a very cool toy but, due to BATFE regulations, would get very little use. However, for government and military use, if fills a particular niche. It is ideal for aircrews and is even small enough to be carried by agents who are operating in non-permissive environments. The ability to conceal and employ a suppressed Glock 43 in an appendix rig has significant appeal. Then again, I wonder how quiet it would be on a Walther PPK? Very “Bondish”!

While the Aurora is not in current production, models are available in limited numbers on the open market. During a recent conversation with the great folks at Gemtech, I learned that they are working on a next-generation micro suppressor that will make use of a new technology. Look for more on this project in the future.

Finally, I’d like to thank Ron Martinez, Gemtech’s CEO, and the rest of the Gemtech crew for their hospitality and support in creating this article.

This article was originally published in ‘Guns & Weapons for Law Enforcement’ December/January 2017. For information on how to subscribe, please email subscriptions@outdoorgroupmags.com or call 1-800-284-5668.