It was more than 50 years ago, but I remember the day quite well. We were on the firing line at Maxwell Air Force Base for our introduction to the .38-caliber revolver. Each of the 20 or so men in my flight was given a 6-inch-barreled S&W K-38, two 50-round boxes of 130-grain .38 Special FMJ ammunition, and a pair of large, blue, plastic earmuffs. Our tac officer told us that using the earmuffs was optional. On the one hand, he said that battle was noisy, and there was reason to get used to firing under the extra stress of gunfire. On the other, he said we just might want to protect our ears. The choice was up to us. I thought I’d better get used to the noise, so I left the earmuffs on the bench. My ears rang for two days, and I never shot again without hearing protection and I stand behind the use of electronic hearing protection most of all.

Like Being Able to Hear? Protect Your Ears When Shooting!

Shooting without hearing protection damages hearing by creating increased air pressure on the ear drums. Excessive noise causes the drums and attached bones in the middle ear to vibrate violently. This vibration is transferred to the liquid-filled inner ear, and when the sound level is over 85 decibels, inner ear fluid pressure is sufficiently high to initiate damage to small inner-ear hair cells that convert vibrations into the electrical impulses that register as sound in the brain. As more of these cells suffer permanent damage and eventually die, your ability to hear is reduced. Once the cells are gone, they’re gone for good.

Most centerfire calibers produce noise levels between 140 and 190 decibels. When several guns are fired simultaneously on an indoor shooting range, the noise level can rise far above 190 decibels. Worse yet, the decibel scale is logarithmic, so 190 decibels is actually many times greater than 85 decibels. Because of this, a single gunshot often produces temporary damage by stunning the cells in unprotected ears, and repeated exposure without hearing protection often results in permanent hearing loss. Of course, sound isn’t only transmitted by the ear drum. The bones of the skull also transmit pressure waves from a gunshot, and this further increases pressure on the inner ear. Now put 20 service members on a covered range and have them all shoot at once, and you can imagine the abuse my ears took on that sunny afternoon in Alabama so many years ago.

Today, there are two basic types of electronic hearing protection offered to the general public: passive protectors like foam ear plugs and muffs, and active protectors that combine either plugs or muffs with electronic circuitry. The electronic protectors usually amplify soft ambient sounds by as much as 30 decibels, and they also have dynamic range compression circuitry that attenuates loud noises. The attenuation circuits quickly block sound that is above a preset threshold, usually somewhere between 70 and 95 decibels. Almost all hearing protectors have a noise reduction rating, or NRR, of at least 19 decibels, and some reduce loud noises by up to 33 decibels.

Foam earplugs and muffs are relatively inexpensive and, when worn together, can be very effective. Unfortunately, they can be so effective that they block sounds you want to hear like range commands and the noise made by game animals as they move through the forest. They also have other drawbacks. Unless they are custom-molded silicone or acrylic products like those from WildEar, earplugs can work their way out of the ear canal and become ineffective. And ear muffs can be so bulky that it’s difficult to shoulder some types of long guns. However, passive ear protectors can be effective in reducing noise when used properly. Passive earmuffs and plugs have NRRs of up to 33, and the WildEar passive molded plugs have an NRR of 26. 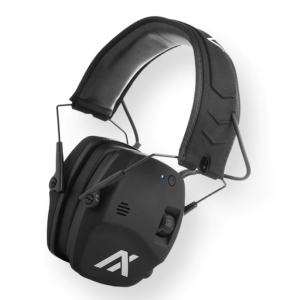 The AXIL TRAKR BLU electronic earmuffs not only provide a more slim and compact option for electronic hearing protection, but they also allow hearing amplification of up to 40 decibels. The earmuffs possess 27-decibel SNR hearing protection and 5.0 Bluetooth support for audio and hands-free communication. The earmuffs protect your ears by sound-activated compression in .02 seconds and AXIL’s Autoblocker Technology compresses all sounds over 82 decibels. The TRAKR BLU earmuffs also reduce wind noise for better hearing capabilities on blustery range days and they’re sweat- and water-resistant to keep you protected no matter the temperature or weather. 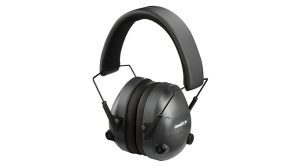 This highly affordable earmuff-style protector has a noise reduction rating of 25 decibels, and it also amplifies low-level sounds. Champion’s electronic hearing protector is also collapsible for easy storage when you’re not on the firing line.
championtarget.com 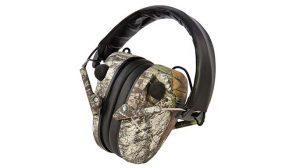 Caldwell E-Max Low Profile Mossy Oak Break-Up: This unit has an NRR of 23. Its low-profile design and Mossy Oak Break-Up finish make it useful for hunters with long guns. The noise compression threshold is 84 decibels. Its dual microphones provide stereophonic hearing, and it amplifies low sounds made by approaching game animals.
btibrands.com 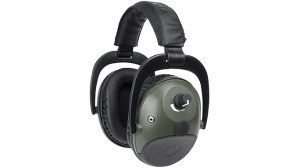 Motorola MHP81: This earmuff-style protector has an NRR of 21 decibels. Noises above 85 decibels are compressed with a very fast attack time. Low-volume sounds are amplified by up to 20 decibels, which allows for excellent situational awareness. Each ear cup has its own circuit that runs on two “N” batteries and also has its own microphone and volume control. In addition, the MHP81 can also be plugged into Motorola Talkabout two-way radios and other electronic devices.
motorolasolutions.com 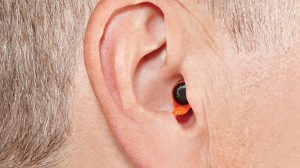 SoundGear’s In-The-Canal hearing protectors insert directly into your ear canal by means of a silicone protective sleeve. These devices have an NRR of 25 and a noise compression attack threshold of 93 decibels. Low-volume sounds are magnified up to 15 decibels. Each protector set comes with large- and small-ear silicone sleeves in both black and orange.
soundgearhearing.com 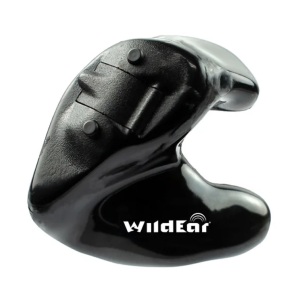 Because FieldEarz are completely customizable thanks to strides made in modern electronic hearing devices, shooters get both optimal protection as well as any necessary amplification. These earplugs include voice alerts, wind reduction, adaptive feedback cancellation, adjustable volume control, and five selectable listening programs for everyday use. FieldEarz have a NRR of 26 dB.
wildear.com