Three 300-horsepower outboard engines propel the Coast Guard patrol boat up and over ocean swells as its driver, or coxswain, maneuvers into position. Ahead of them is a high-performance speedboat known to the crew as a go-fast, the general term they apply to any fast-moving vessel. Once alongside, a crewman draws his Remington 870 shotgun from the gun mount near his seat. Holding its pistol grip, he runs the firearm’s action forward, then lifts the shell latch and loads four rounds.

The coxswain calls the target forward of the go-fast’s bow and directs the crewman to make ready and sight in. Immediately, the crewman raises the shotgun to his shoulder and his eyes, racks the action, chambering a round. He confirms he’s on target and tracking. At the command fire, the crewman presses the shotgun’s safety off and pulls the trigger. A single round exits the barrel and travels into the air with little recoil or sound. It travels above and forward of the go-fast unnoticed, then explodes in a violent burst of light and sound that sends a concussion through both boats.

Caught off-guard, now aware of and scared that weapons are trained on them, the suspects bring their boat’s throttles to neutral and raise their hands in surrender. Pacing close aboard, the Coast Guard slows and quickly maneuvers alongside, both hulls making contact as officers storm the deck with their weapons drawn. 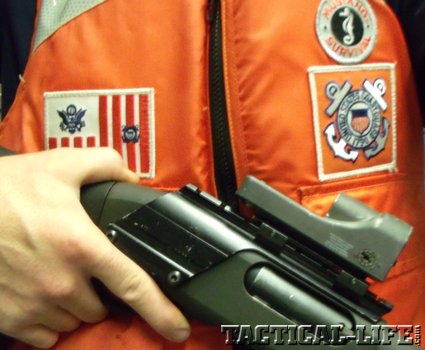 Minutes before it was stopped, the go-fast, moving at top speed and covered with tarps to conceal the bales of cocaine on board, crossed an invisible line 12 nautical miles offshore and essentially entered the United States, where its crew and cargo became subject to the penalties of federal narcotics law. A U.S. Coast Guard helicopter was the first to spot the suspect vessel, finding it in spite of the dark ocean by employing a forward-looking infrared imager that detected heat from the boat and provided images with enough detail to identify specific indicators of smuggling. Acting on these observations, the helicopter’s pilot vectored a nearby patrol boat to the scene and watched as it accomplished the intercept and pulled into position behind the go-fast with a 180-degree turn at nearly 60 knots.

This is a scenario played out almost weekly in waters of the Florida Straits, Gulf of Mexico, Great Lakes and the Pacific Northwest, where smugglers employ fast boats to import drugs, people and other illegal contraband into the U.S.

The explosion that brought an end to the chase described above was created by what the military refers to as the LA51 flashbang. A 12-gauge, non-lethal munition, the LA51 is fired like a standard shotgun round, but it functions as a pyrotechnic distraction device similar to the canister-style flashbangs used on shore. 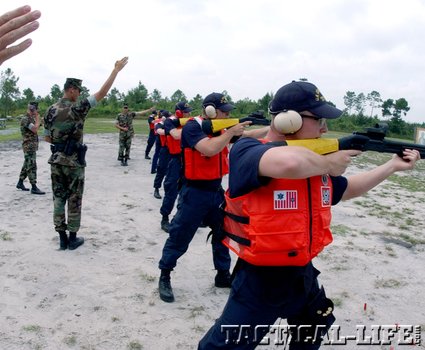 U.S. Coast Guard crewman are required to qualify on multiple courses of fire that account for a variety of ammunition types before they are issued a Remington 870.

Prior to its adoption, Coast Guard crews relied on 5.56mm tracer rounds fired from shouldered M16A2 rifles or 7.62mm rounds from M240B machine guns mounted to their vessels to warn suspect boats that they should end their attempts at evasion. Tracers glow red through much of their flight after exiting a barrel and provide an effective warning signal that’s visible both day and night, but they also pose a risk of injury and death to anyone downrange—they are nearly identical to ball ammunition in terms of their ballistic performance and lethality. By employing the LA51 and training to fire it above, rather than at suspects, officers avoid much of the potential for injury in situations where there is no intent or desire to harm. Most boat chases involve no direct physical threat to the officers, making the flashbangs ideal for delivering a forceful warning to stop without employing lethal ammunition.

Designed as a pyrotechnic, the LA51 is a 3-inch cartridge containing a percussion primer, smokeless powder, and a thin-walled aluminum projectile. When the cartridge is fired, the burning propellant ignites the fuse and produces an explosive pyrotechnic flash, a bright white light lasting about 1 second, and a 170-decibel blast. Though intended as a non-lethal round, as with any pyrotechnic, a slight potential for injury remains if the round strikes or detonates within 60 feet of an individual. The rounds have an effective range of 327 feet, but due to variations in load, can function as close as 100 feet or as far away as 500 feet. Initially used by the Coast Guard strictly for vessel pursuits, the LA51 has also found applications in the service’s point-protection mission, where it is now used to warn away vessels approaching restricted areas and protected vessels. 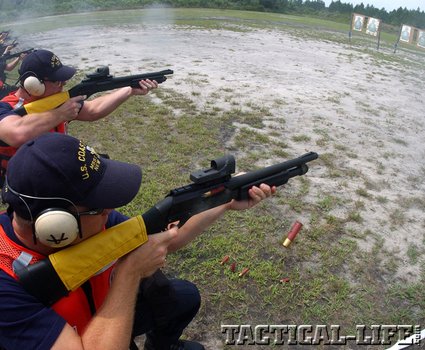 In practice, the Coast Guard initiates a stop by maneuvering alongside or astern of a suspect vessel, switching on its blue lights, and directing the stop over a loudspeaker, stating, “Stop your vessel or you will be fired upon.” Most vessels stop at this point, but if there is a failure to yield, the Coast Guard moves to deliver warning shots in the suspect vessel’s path at a point forward of its bow. LA51 flashbangs are now preferred, but tracers remain an option with either fired in several volleys to ensure the message is received. Failing to heed these warnings causes a progressive rise in force, with physical maneuvers involving contact between the vessels’ hulls considered first. If these fail, the stop is forcibly compelled with disabling fire, or rounds fired into the vessel’s engines. When disabling fire becomes necessary, the LA51 is replaced in the shotgun’s breech with a copper sabot slug, a round found to be effective at penetrating fiberglass hulls and cowlings to reach the engine blocks they contain.

Failure to stop or heave to for the Coast Guard when ordered to do so is a federal felony punishable by up to 15 years’ imprisonment. Despite the consequences, go-fasts loaded with contraband in the Florida Straits, the Caribbean, and across the northern and southern borders, routinely try to outrun authorities and cause the Coast Guard to expend a fair amount of ammunition to end their pursuits. That said, the next time you consider asking a Coast Guard crew how fast their boat goes, consider this: With guns on board to end chases, does it really matter what their top speed is?