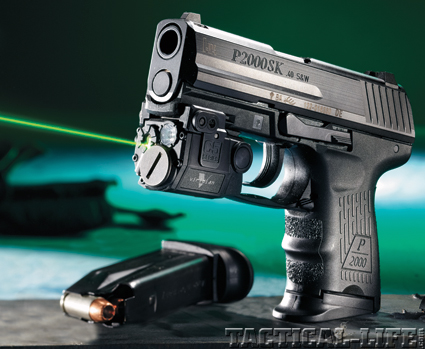 HK’s P2000 SK is a compact combat pistol chambered for popular LE rounds and ready for accessories, like the Viridian C5 laser.

There are certain features that a pistol designed for law enforcement or military use demand, and these basic principles have not changed since John M. Browning and Colt fulfilled the design requirements for the Government Model 1911 a century ago. What has changed over the last 100 years is the means by which those requirements can be met and surpassed. The demands of a 21st century sidearm are ease of use, compatibility for multiple end-users, as many ambidextrous features as possible, dependability under all conditions, minimal weight and maximum recoil management. The other requirement that many contemporary firearms either eschew or regard as passé is basic familiarity with common operating features.

It is the latter that the HK P2000 SK addresses in a modern but straightforward method, which makes this a sidearm that one can pick up and understand fully in a matter of moments. There is nothing obscure here.

What you notice first about this HK pistol, available in 9mm and .40 S&W calibers, is that it is tough, hammer-fired, and that it can be easily decocked—three features I find highly desirable in a handgun that is designed for concealed carry. Weighing in at 1.5 pounds empty or roughly 2 pounds with 10 rounds of .40 S&W loaded, an overall length of 7 inches, a height of 4.75 inches (rear sight to base of magazine), and a width of 1.3 inches, this is a hand-filling subcompact based on the slightly larger HK P2000. It features a polymer frame, 3.26-inch polygonal (cold hammer-forged) barrel and steel slide. 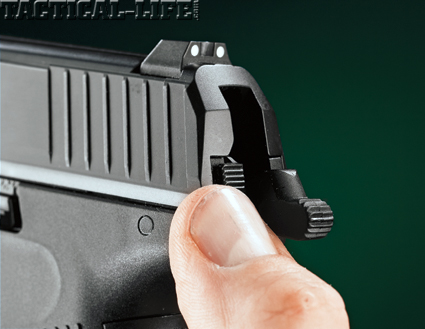 The uniquely designed ambidextrous decocking lever is located on the rear face of the slide next to the hammer.

In terms of size and balance, using the standard nine-round magazine with baseplate finger extension, the subcompact SK grip comfortably supports the third finger. Those with slightly smaller hands will find the little finger can also rest on the magazine’s finger extension. One note of caution here: With the little finger resting on the lip of the extension, it can get pinched as the magazine moves upward during recoil, so unless you have a well-spaced hold it is best to drop the little finger under the extension, regardless. The P2000 SK can also be equipped with an optional 12-round (.40 S&W) extended-capacity magazine from the USP Compact that eliminates this minor consideration and extends grip length with the optional X-Grip magazine sleeve.

The P2000 SK is built in two variations, the V2 with LEM (Law Enforcement Modification) and enhanced double-action-only (DAO) trigger system, or the V3 (as tested) with a double-action/single-action (DA/SA) trigger and decocking device. The DA/SA trigger system was introduced in 2005 on the full-size HK P2000 as a model variation. The P2000 with LEM (in .40 S&W) is currently the standard-issue sidearm of the U.S. Border Patrol. 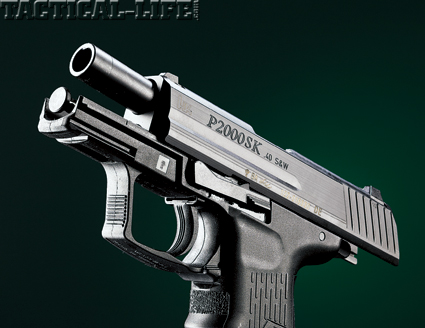 The P2000 SK features a durable polymer frame with an integral accessory rail molded directly into the dust cover.

The gun’s ambidextrous decocker, located on the back of the slide, combined with ambidextrous magazine and dual slide release levers, makes handling the subcompact SK seamless for right- or left-handed shooters, as well as providing a tactical advantage if it becomes necessary to operate the gun with the weak-side hand and all controls, even the decocker, are easy to use with either hand. During the range test I reloaded both left and right handed (released the empty magazine and dropped the slide and reload) and found no difference in use, balance or function. The DA/SA trigger system also allows second-strike capability and the SK can fire a chambered round with the magazine removed.

The ambidextrous magazine release is a one-piece lever positioned under the rear of the triggerguard with serrated extensions projecting from either side. While small, they are easily activated. Interestingly in my case, I found using the trigger finger on the right side easier than using the thumb on the left. The slide releases are of a design reminiscent of the Browning Hi-Power of the late 1930s, using a long shaft to provide additional torque and release the slide from its locked-back position with minimal effort. The decocker is the wild card feature, being mounted on the left rear of the slide and activated by pressing it downward, which firmly drops the hammer into the safety position. 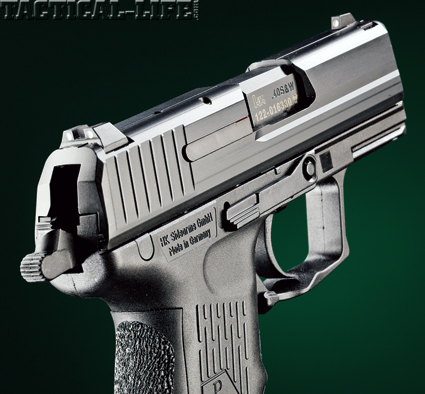 The P2000 SK comes standard with a set of dovetailed white three-dot sights. Note the large ejection port on the slide.

The polymer frame has rough-grained texturing molded into the backstrap and finger grooves and vertical strakes molded in the grip panels, giving a fully textured gripping surface that is tactile but not hard on the hand during recoil. The frame also has ambidextrous thumb rests. Compared with many of HK’s contemporaries, the grip angle is closer to that of an M1911 and should point naturally for most shooters. One of the most noticeable characteristics of the entire HK series is a wide, curved trigger and very wide triggerguard, the latter providing additional support for the strong-hand grip. This trigger curve is an excellent design given the duality of DA/SA action designs, which tend to make the first shot (DA) a long, hard pull. The HK does, with a manufacturer’s specified weight of 11.47 pounds.

One additional feature that differs from the standard P2000 design is a dual recoil system that utilizes a small, flat coiled spring left exposed on the back half of the guide rod, combined with a much larger flat steel coil spring wrapped around a piston-like cylinder traveling the length of the guide rod during recoil. This dual-action design absorbs a significant amount of energy and really comes into play with .40 S&W loads, which generally induce heavy recoil. I found the standard backstrap panel perfect for my hand, so no backstrap panel changes were required. There are four different sizes available—small, medium (standard), large and extra large, making the SK a very compliant sidearm for just about any hand size. 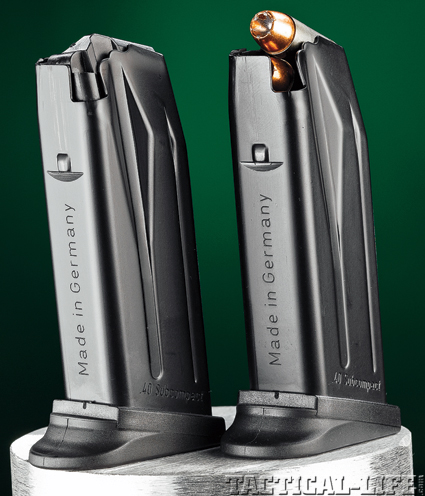 One of the first things you notice when loading the P2000 SK is the ease with which the slide release operates, requiring only modest effort to activate. The decocker is more of a serrated button than a lever, but once you get a feel for it, decoking a loaded P2000 SK is easier than most other semi-autos with this feature. In terms of balance, the gun is just slightly muzzle-heavy. The double-action trigger pull is long and heavy, with my test gun averaging 12 pounds, but there is zero over-travel and very quick reset to single-action after the first shot. The trigger pull then becomes a smooth 5.44 pounds with 0.5 inches of take-up before dropping the hammer. 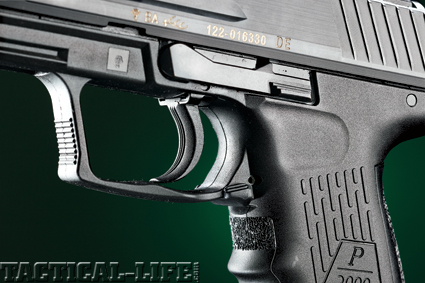 More noticeable characteristics of the P2000 series include the wide, curved trigger and squared-off triggerguard.

The P2000 SK comes with low-profile, dovetailed white-dot sights that are easy to acquire under most lighting conditions. They are just a little low for my personal taste, but taller sights would add more surface area and increase the potential for snagging on clothing during a concealed draw. They are, however, interchangeable and HK offers tritium night sights as an option.

My targets were Speedwell B-27 full-body silhouettes at a distance of 15 yards (45 feet), and shots were fired off-hand at 1-second intervals using a Weaver stance and two-handed hold. Accuracy when fired single-action was impressive—average five-round groups measured 1.5 inches in the 10 and X rings of the B-27 silhouette.

The HK performed flawlessly either left- or right-handed, and the decocker is a breeze to activate with the thumb. Re-cocking the serrated hammer on the draw is seamless. The white-dot sights line up quickly and the SK’s balance during recoil is excellent. All test shots struck in the center of the target (10 and X rings), with the best group delivered by Hornady FTX at 1.5 inches. Of the three brands of ammunition tested, the Hornady was also consistently the most manageable in terms of recoil and speed to get back on target. CorBon DPX and American Eagle FMJ groups were also within the 1.5- to 1.75-inch average, with American Eagle FMJ delivering the most perceived recoil. 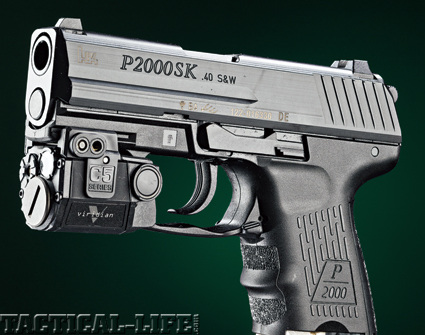 Shooters can definitely get a firm grasp of the gun, as the frame has finger grooves and a rough texture molded into the grip.

Final Thoughts
Is this an ideal gun for undercover or backup use? For the most part, a resounding “yes,” as it has the three key features I find essential—ease of use, ambidextrous controls and a DA/SA trigger with decocker. The new HK P2000 SK offers a highly desirable combination of accuracy, ease of use, compactness and just enough heft to make chamberings like .40 S&W manageable. If I knew I was going to be in a firefight and could pick only one compact sidearm for my defense, I’d take this one in a heartbeat. For more information, visit Heckler & Koch at hk-usa.com, or call 706-568-1906. 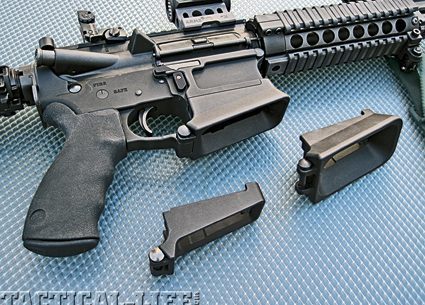