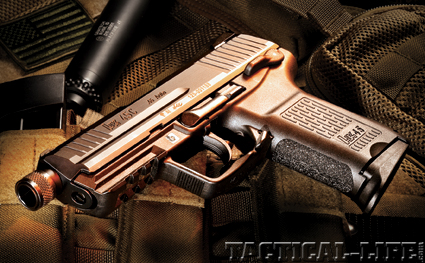 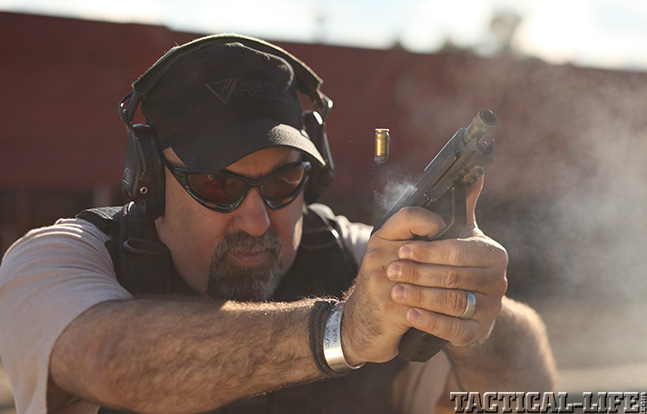 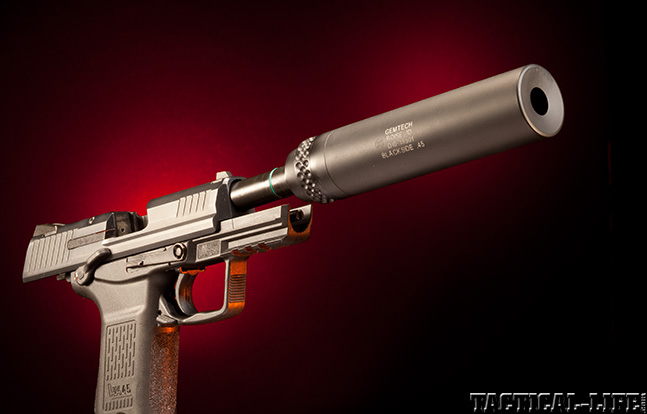 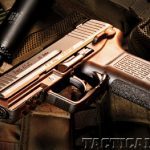 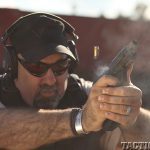 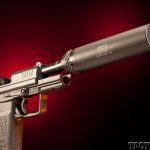 Heckler & Koch has been the premier manufacturer of polymer-framed .45-caliber pistols since the introduction of the P9S .45 ACP some 30 years ago. In the early 90s, HK introduced their USP series pistol in .45 ACP. My previous agency was one of the first to issue this pistol to their S.W.A.T. team, and it is their issue pistol to this day. The USP is well known as a very reliable and accurate pistol. I carried several extensively, both on patrol and as my issued S.W.A.T. gun.

The development of the USP led to the MK 23 SOCOM pistol. The MK 23 was very large, and was not well received by the end users due to its size. However, they were exceptional in regards to their accuracy and performance, especially when used with a Knight’s Armament suppressor. This led to the USP Tactical, which utilized all of the good parts of the MK 23 (O-ringed, threaded barrel; suppressor-height adjustable sights; match trigger), but in a smaller and handier platform. Many special operations units around the world have adopted this pistol.

The sizes of the USP .45 and MK 23 platforms have always remained a drawback. With the introduction of the HK USP Compact .45, those with average and smaller hands got a terrific pistol that was an exceptional performer. This fact was not missed within the SOCOM (Special Operations Command) community. Working with their customers inside of SOCOM who desired a smaller suppressed .45-caliber pistol, HK developed the USP CT (Compact Tactical) .45, which was also known as the MK 23 Mod 1, as a follow-up to the MK 23. This pistol utilized HK’s 5-pound LEM (law enforcement module) trigger, and a longer O-ringed, threaded barrel and a Knight’s Armament suppressor (like the MK 23 and USP Tactical). The HK USP Compact .45 uses a smaller, 8-round magazine that allows for a much smaller grip than the full- size USPs. The compact grip fits my hand far better than the full size, and the HK USP Compact .45 is one of my all-time favorite carry pistols. 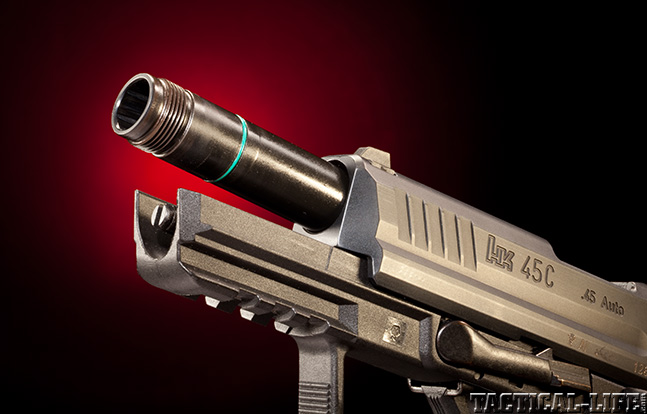 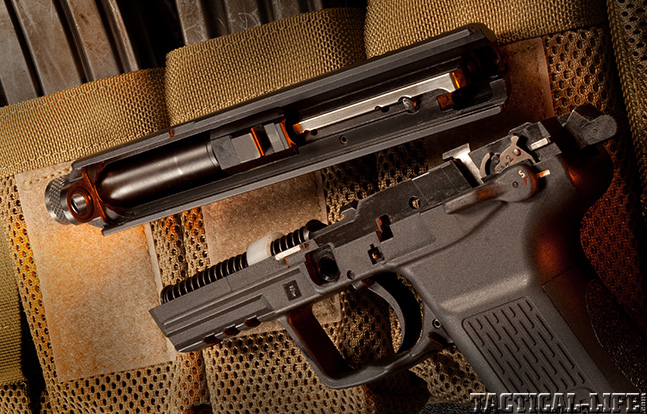 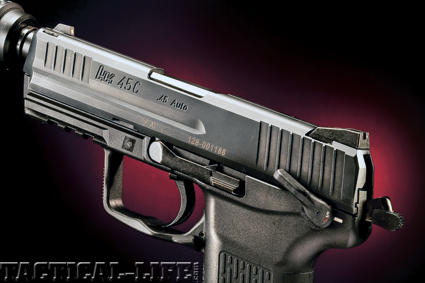 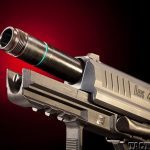 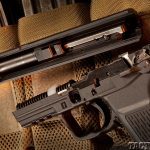 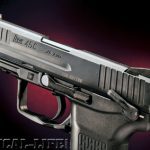 Confluence of Design
As time progressed, several things came together to produce some of the best .45 ACP service pistols ever made. HK was prepping for the SOCOM Combat Pistol program, and two very well-known individuals began working with HK as consultants. Ken Hackathorn is one of the foremost special operations trainers in the world and a true small arms expert. Larry Vickers is not only a well-known shooter and trainer, and a highly in-demand gunsmith, but he also served for 20 years in U.S. Army special operations, including Special Forces Operational Detachment-Delta. Both gentlemen are known for using the Colt 1911 to its maximum potential.

Ken and Larry used their combined expertise to utilize existing HK platforms to suggest changes for a new pistol that could become the 1911 for the 21st century. This included the frame and ambidextrous controls of the P2000, a more rounded and lower slide with front cocking serrations, the USP’s modular trigger system, redesigned control levers to better mimic the 1911, a Mil-Std-1913 Picatinny rail, and an O-ringed, polygonal-rifled barrel in both standard and extended lengths. In conjunction with the engineers at HK, the HK45 and HK45C (Compact) were born.

These guns passed extensive test par­a­­­­meters that included firing very high (24,000) round counts both suppressed and un-suppressed, in harsh conditions that ranged from desert environments to water submersion. They have also passed testing that includes bore-obstruction and other destructive tests. HK made several changes to the grip and other areas of the full-size gun, but the Compact stayed true to Ken and Larry’s original ideas. I have purchased numerous HK45Cs, and they are my primary working .45 ACP pistols. They can be used with flat magazine floorplates as a compact concealed carry pistol, with standard rubberized floorplates for a better grip; an extended 10-round magazine with a threaded, extended barrel can even turn the same gun into a full-size tactical pistol.

Steel For SEALs
The saga of the HK45 Compact has taken a very interesting turn recently. In early 2011, the HK45 Compact was selected by the Navy as a replacement for the MK 23 pistol for use by Navy SEALs and other Naval Special Warfare personnel. Its new designation is the MK 24 Mod 0 Combat Assault Pistol. It is outfitted with an AAC suppressor. Crimson Trace was awarded the contract for a waterproof IR laser system that mounts under the frame on the rail. The Crimson Trace unit is very thin and follows the contours of the pistol well. The sources I have on this indicated that the HK45 Compact was not the pre-testing favorite, but it came out the winner at the end of testing. This type of testing is generally done within the individual units and the protocols are not available for public consumption. With that said, based on the mission requirements that this pistol fulfills, you can bet that the testing was extensive.

The pistol that is being replaced by the HK45 Compact is the MK 23. The MK 23 is huge, and it has an overly complex set of controls. It is not viable for any sort of role outside of its main use as an “Offensive Pistol.” In this role, many found that they would be better served with a suppressed MP5 SMG, and the more current HK MP7 SMG. 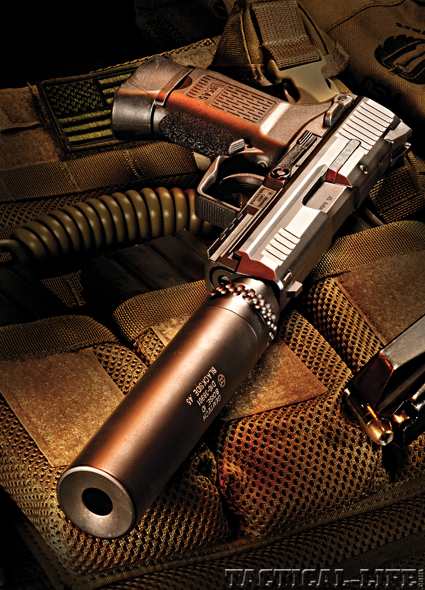 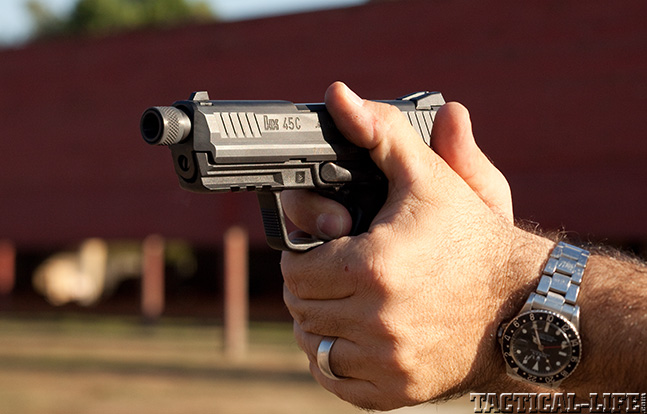 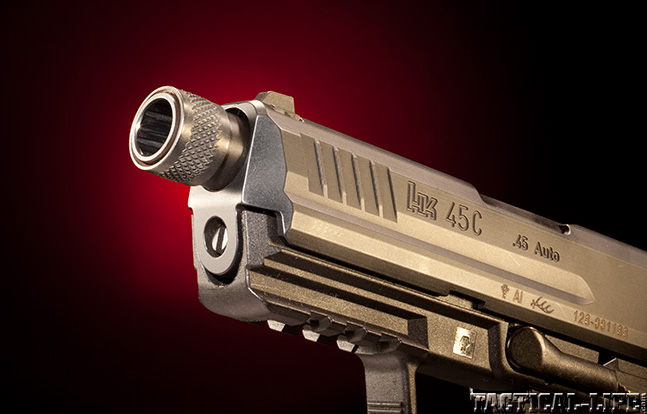 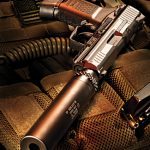 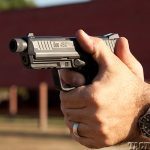 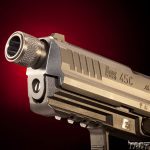 HK45C pistols are equipped with an ambidextrous slide release and all edges have been rounded off to resist snagging on clothing.

Top-Drawer Spec Ops Pistol
The HK45 Compact gives the SEALs a pistol that can be used with an IR laser in conjunction with night vision goggles and a suppressor with 10 rounds of .45 ACP, for the specialized roles that were intended for the MK 23.

It is in service with the SEAL team specifically tasked with counter-terrorism missions. This team uses several HK weapons systems (the HK416D carbine and MP7 SMG). Unlike the MK 23, the HK45 Compact can be stripped down and carried as a great concealable firearm for a personnel defense pistol when needed. In today’s world and our current conflicts, it’s a major asset for our special operations people to have firearms that work in a covert capacity. The HK45C has far greater capabilities because it not only fulfills the role of an assault or offensive pistol like the MK 23, but it can also fulfill the roles that are currently held by the excellent SIG P226 and P228s used by Naval Special Warfare sailors. The HK45C is not a replacement for the SIGs, but it does have the potential for that some day.

My information on the MK 24 Mod 0 is that they will be equipped with a Variant 3 detent plate, which allows the control lever to function as a decocker only. This will allow the HK to function like the SEALs’ current SIG P226 pistols. While many special operations units like single-action pistols or other systems with light triggers, the SEALs have always had a reputation for carrying double-action/single-action guns. The rationale has been the same used by many law enforcement agencies: This mode of carry allows for a higher level of safety when the pistol is carried concealed, and when they are carried without a holster. The DA/SA system with a decocker essentially uses the heavy DA/Trigger function to replace a mechanical safety lever. Pistols like the HK45s and SIGs with exposed hammers also allow a user to know the exact condition their pistol is in visually, unlike a striker-fired pistol. Like anything, there are positives and negatives to all of these configurations and the SEALs are well versed in using this system. If they decide to change the configuration at some point due to changes in operational needs, unit armorers can do this and there is no need to purchase different guns.

Another important issue for military special operations units is caliber. In most cases, military units have been restricted to FMJ ammunition. When using modern hollow point bullets from the top manufacturers, the capabilities of the bullets between 9x19mm and .45 ACP are not overly significant. In the case of military FMJ ammunition, the difference is huge. The 9mm FMJ is horribly anemic for use against humans in a combat role.

While .45 FMJ is not a great performer, it is far better than the 9mm in this configuration. Additionally, the HK45C functions exceptionally well with my carry load, the Federal 230-grain +P HST. This is a fairly hot load, and one huge benefit to HK’s .45 pistols is that they run very well with high performance +P .45 loads.

First-Rate CCW
Overall, the new HK45 Compact is a great pistol that is capable of doing many tasks very well. It allows the user to have a pistol that can go from an easily concealed carry pistol to a full-boat suppressed offensive pistol—and all modifications needed for this transformation can be done by the user. A minimally trained armorer can change the way this gun operates easily, using factory-available parts.

It is a pistol capable of match-grade accuracy right out of the box. They are reliable even when subjected to harsh environments. They are easy to use, and critical controls can be accessed with either hand. From personal protection, law enforcement and home-defense duty, to the tip of the spear with one of America’s most elite special operations units, the HK45 Compact is rapidly gaining ground as one of the best .45 ACP pistols of our time, and the goal of creating a 1911 for the 21st century is becoming a reality. For more information, visit hk-usa.com or call 703-450-1900.

Compact, yet powerful .45 ACP powerhouse. Shown here with a Gemtech suppressor, the Heckler…