Hogue, Inc. has always had a knack for producing high-quality grips. The company recently went a step further for the 1911 platform with its all new Laser Enhanced (LE) Grip for 1911 Government model autoloaders.

Hogue’s new LE Grips are not just a first for Hogue. According to the company, they’re the first handgun laser sighting system on the market based on a fully programmable, digitally-controlled microprocessor circuit.

Hogue’s designers capitalized on the advantage by programming three operating modes (steady, flashing or stealth target) and three user-selectable intensity levels (low, medium and high) into the LE Grip’s circuit. They also tapped into sophisticated power management routines to ensure long life from two common CR-2032 batteries hidden under the grip on the non-laser side – an important design feature enabling battery changes that don’t take the laser out of zero.

Each LE Grip is bore-sighted at the factory while fine windage and elevation adjustments are available via small set screws. All of the Hogue LE Grip’s programming features are accessible via a pressure-sensitive programming buttons on the grip.

Hogue has stated that LE Grips for the Smith & Wesson J, K and L-Frame models are coming next.

Hogue LE Grips are supported by a three-year warranty and are now shipping for government model 1911 pistols with an MSRP of $189.99 for black and $199.95 for colors.

For more information on the LE Grips and other products from Hogue, please call 1-800-438-4747 or visit HogueInc.com. 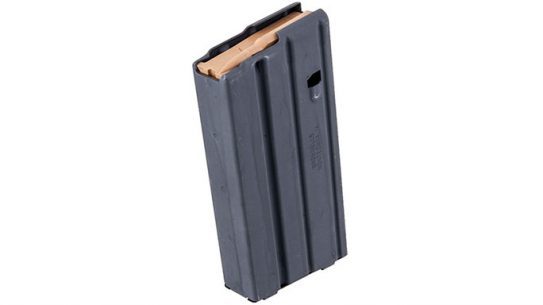 The all new .308 AR magazines from Brownells fit DPMS-pattern or SR-25 style rifles...