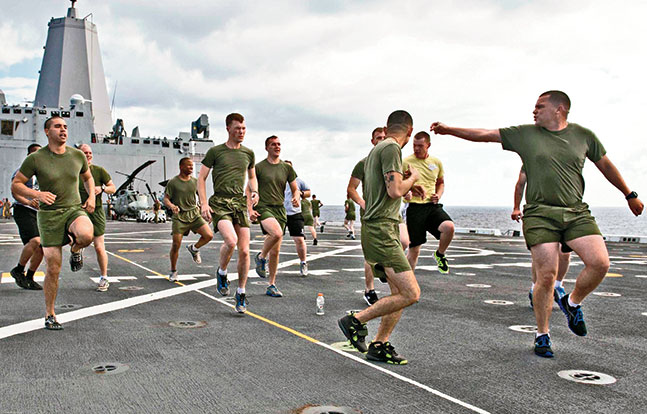 1 of 6
One Step Ahead: Homegrown Training Footwear
Physical training (PT) is a requirement for all service members, including sailors at sea. Military personnel may wear athletic shoes of their choosing after basic training. The military-issue Saucony athletic shoe (example below) will be made in the Wolverine Worldwide factory in Big Rapids, Michigan. 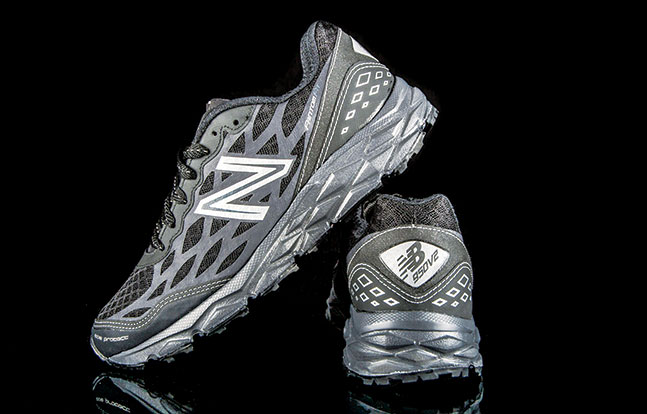 2 of 6
One Step Ahead: Homegrown Training Footwear
The New Balance 950v2 model will compete for Department of Defense contracts for issue to new military recruits. 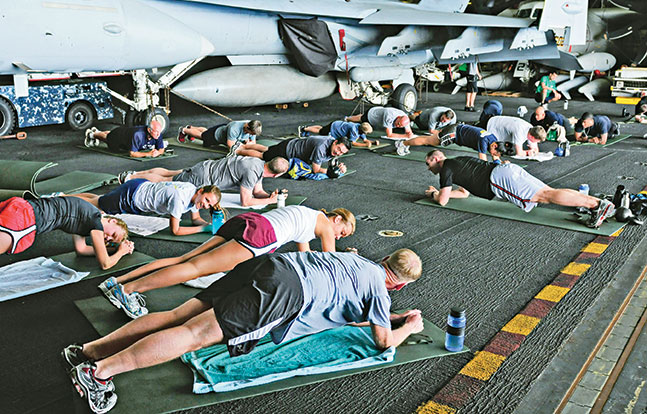 3 of 6
One Step Ahead: Homegrown Training Footwear
Sailors work out on the hangar deck of an aircraft carrier to maintain physical fitness, wearing athletic shoes of their choice. 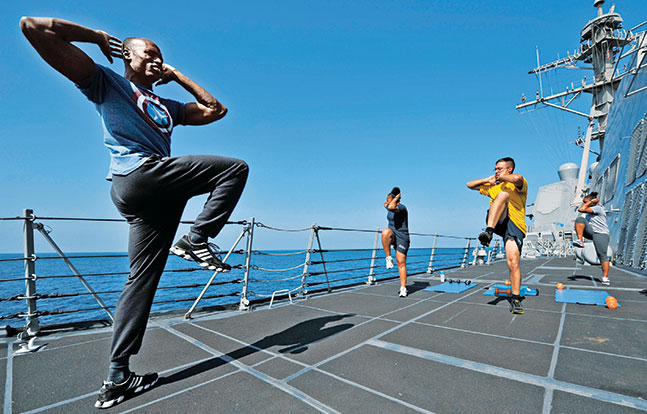 4 of 6
One Step Ahead: Homegrown Training Footwear
Sailors work out on the hangar deck of an aircraft carrier to maintain physical fitness, wearing athletic shoes of their choice. 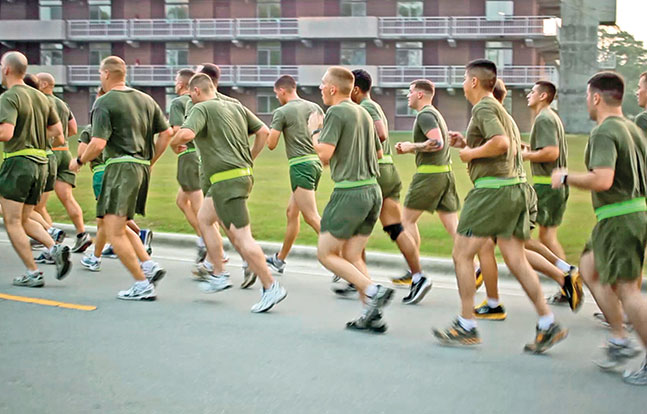 5 of 6
One Step Ahead: Homegrown Training Footwear
Marine recruits run in formation during basic training. Note the variety of athletic shoes on the unit members’ feet. 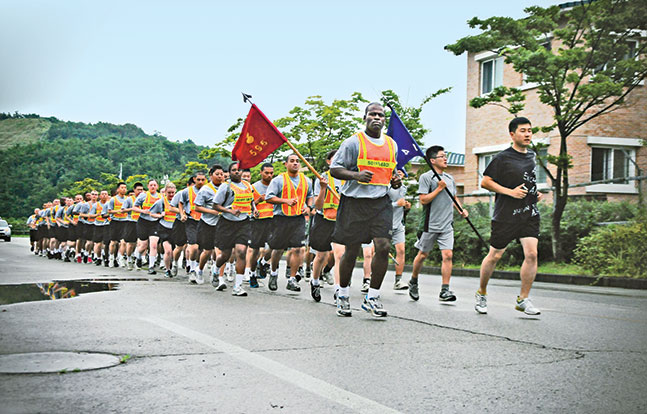 6 of 6
One Step Ahead: Homegrown Training Footwear
U.S. soldiers of the 595th Maintenance Company run on a street with Republic of Korea (ROK) soldiers during physical training near Busan, South Korea. 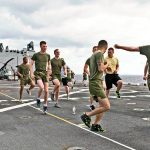 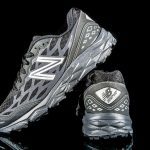 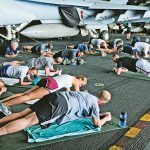 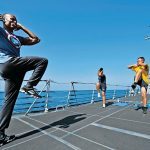 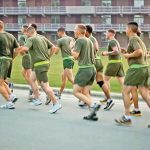 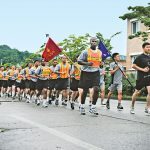 In 1941, as the U.S. geared up for possible involvement in World War II, Congress passed the Fifth Supplemental National Defense Appropriations Act (USC, Title 10, Section 2533a) and directed the Departments of War and Navy to purchase only American-manufactured products for military use and also specified that U.S.-made components constitute at least 50 percent of the cost of end goods. The legislation, known as the Berry Amendment (the source of the name is unknown—no one named Berry served in Congress at the time) has been in force, but not always followed, ever since. Some items are exempt, but military clothing, including footwear, has been subject to the law, although Department of Defense (DoD) procurement processes haven’t been consistent. Uniform dress shoes and combat boots have “Made in America” labels, but athletic shoes often do not. Many popular athletic shoe brands are fabricated overseas, even if their corporate headquarters are in the U.S.

“The footwear design has incorporated the particular needs of the armed services to create a lightweight, durable, supportive shoe that can withstand the rigors of basic training …”

Recently, however, the DoD announced that it will purchase Berry Amendment-compliant athletic shoes used for physical training (PT). Only new recruits will be required to purchase U.S.-made shoes, using vouchers provided for acquiring athletic gear for basic training. The rule does not apply to current service members, however, who may continue to wear running shoes of their choice. After basic training, new troops are free to purchase and wear any athletic shoe they prefer. The DoD decided on these actions without any guidance from Congress.

Berry Amendment compliance may benefit two U.S. shoe companies: Wolverine Worldwide, Inc., which produces Saucony athletic shoes, based in Rockford, Michigan; and New Balance Athletic Shoe, Inc., of Boston, Massachusetts. Wolverine and New Balance joined forces to work on the issue several years ago and earned certification to offer their products to the Department of Defense through competitive bids. It is likely that the two companies will share procurement contracts. The program will have no impact on American taxpayers and may actually save money in the long run.

Both companies maintain U.S. manufacturing facilities, although both also produce footwear overseas for the global market. Wolverine, founded in 1883, produces a wide range of brands including Bates, Hush Puppies, Keds, Stride Rite and Saucony. New Balance got its start in 1906, and the company focuses on athletic shoes and apparel.

“The DoD had been ignoring the Berry Amendment when it came to athletic footwear, and U.S. companies have the capability and interest in producing these products.”

According to David Costello, a spokesperson for Wolverine, “The DoD had been ignoring the Berry Amendment when it came to athletic footwear, and U.S. companies have the capability and interest in producing these products,” he said. “Manufacturing athletic shoes in the United States helps preserve the overall domestic footwear industry and provides hundreds of jobs to Americans. Wolverine Worldwide, the manufacturer of Saucony athletic footwear, has led this effort, and we collaborated with our competitor and colleagues at New Balance, to work together to advance this effort. Both Saucony and New Balance can manufacture state-of-the-art athletic shoes at their facilities in the U.S.”

New Balance spokesperson Matt LeBretton echoed Costello. “It’s not a slam dunk, but this is the biggest step forward in the five years that we have been working on this,” he said. “We think this is a great step forward that the Department of Defense has recognized that they haven’t followed the law and are making a policy change. We are hopeful about what this would mean for domestically made footwear for the military.”

Costello noted, “Saucony will be building state-of-the-art running shoes that are based on its latest commercial designs. The footwear design has incorporated the particular needs of the armed services to create a lightweight, durable, supportive shoe that can withstand the rigors of basic training,” he added. “Every component within the shoe is sourced from the United States, from the fiber used to weave the fabrics, the shoelaces, the EVA cushioning and the Vibram soles.” Wolverine will fabricate the military shoes at its facility in Big Rapids, Michigan, the same plant that produces Bates-brand dress shoes and combat boots for the military, selected Wolverine-brand work boots and casual shoes, and selected Caterpillar-brand work boots.

New Balance will provide its 950v2 model, a low-cut running shoe that incorporates ABZORB cushioning in the heel and forefoot. The military model is already in production. New Balance is fabricating the shoes in its factories in Boston and Lawrence, Massachusetts, and in Skowhegan, Norway and Norridgewock, Maine.

Costello summed up the importance of the decision for Wolverine and New Balance. “It’s a significant win for those who believe in helping maintain a domestic industrial base,” he concluded. “In addition to the troops who will wear this footwear, the change will affect the footwear manufacturers, primarily Wolverine’s Saucony-brand running shoes, and New Balance, but also the fabric makers, sole-maker Vibram, leather providers and even the shoelace makers in the U.S. who depend on domestic production.” 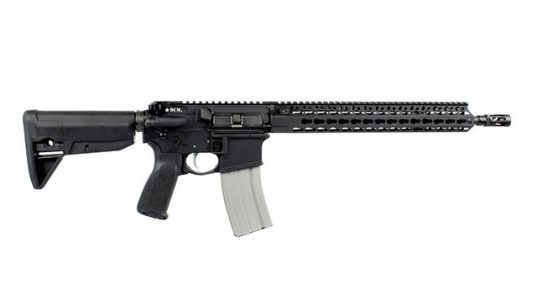 The RECCE-14 KMR ELW Mk2 is a combat-ready carbine with cutting-edge accessories, a KeyMod...