How To Lose The AR Twang

0
SHARES
448
VIEWS
Share on FacebookShare on Twitter
JPE’s Silent Captured Spring eliminates the sound of the recoil spring grating on the inside of the lower receiver extension tube.

Anybody that has snuggled up against the stock of an AR-15 and pulled the trigger is probably familiar with the scratchy “twang” as the bolt carrier assembly travels backwards in recoil against the buffer spring. Aside from being annoying, it can break concentration when trying to squeeze off a quick follow-up shot. Nearly as bad is the sound the recoil spring makes when pulling the charging handle as it scrubs the inside of the recoil spring tube. It makes my skin crawl, akin to scraping fingernails across a chalk board. It doesn’t seem to matter if the AR is a $500 parts gun or a $3,500 custom rig—they all seem to need some help ironing out this maddening quirk. 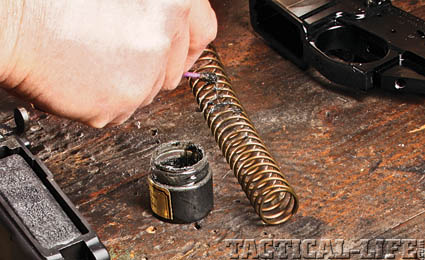 A coating of moly grease on the recoil spring is a cheap, easy way to reduce that irritating charging noise.

I’ve had a Bushmaster Varminter for several years that wears an ACE skeleton stock, and it was a “twangy” offender until I did something about it. The first remedy I performed was to remove the recoil buffer and spring. Then, I took a dab of moly grease and coated the spring with an ample amount. The part of the buffer that made contact with the inside of the recoil spring tube got a coating of grease, too. You don’t want too much grease—just enough to lubricate the system. If you pull the charging handle back and grease squirts out of the gun, you’ve gone and overdone things.

Greasing the recoil spring helped quite a bit, but it has its downside, too. Grease and oil are dust magnets. And, if you’re shooting a suppressed weapon, carbon, grit and gunk buildup gets magnified when it’s got something like grease to adhere to. Although a simple fix, greasing the recoil spring may not be the best choice if you have to fight in a dusty, sandy environment. Or, if you are shooting competitively in grimy environs, you may want another option to cure the “twangs.”

Another simple fix I’ve tried is the Twang Buster, made by J&T Distributing. It is a simple delrin disc that dampens the vibrations in the recoil spring when the weapon is fired. “Snap it into the rear end of your spring, opposite of the buffer,” J&T Distributing’s Assistant Shop Foreman Tim Mourning said. “Press it into the spring and it stays captive. They work very well.” I couldn’t agree more with Tim. That simple $5 part works wonders when trying to tame recoil spring vibration and noise. (jtdistributing.com; 859-745-1757)

When I attended an industry trade show last January, I got a surprise when I stopped by the JP Enterprises booth. Moments after greeting John Paul and asking the obligatory “what’s new,” he smiled and said, “You’re going to like this a lot,” as he pulled a couple of shiny new parts from his back pocket. “That ‘spoon over a cheese grater’ sound emitted whenever they’re charged or fired has always been an ugly blemish for ARs, and one we’ve worked hard to eliminate,” John Paul said. “We’ve spent years specially selecting buffer tube manufacturers based on the quality of their tubes’ interior finish. We designed and produced our own action springs with a perfect centerless-ground and precision-polished outside diameter. These JP Custom Buffer Springs are an inexpensive way to upgrade an AR, and they’re why we have the quietest, smoothest rifles on the market.” 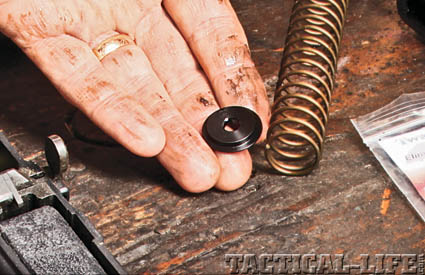 J&T Distributing’s Twang Buster is a $5 part that will dampen the pesky vibes when you pull the trigger.

I had to agree, JP’s rifles are some of the quietest on the market, but the other part he held in his hand really got my attention. “Our pursuit of perfection didn’t stop with springs. They led us to ultimately create the JP Silent Captured Spring. This new product maintains all the benefits of our polished buffer springs and LMOS buffer, and this combination buffer-spring assembly eliminates the friction of standard buffer components. This results in outstanding smoothness and sound abatement. The spring is removable from the assembly for custom-tuning, too. Both the AR-15 and AR-10 versions of the JP Silent Captured Springs are functional in rifle- and carbine-length operating systems.”

The AR-15 version of the JP Silent Captured Spring is made to fit in a carbine stock. It comes with a polymer spacer to take up the difference in length for rifle-length stocks. This unit retails for $124.95. (jprifles.com; 651-426-9196)

If you’re like me and want to improve the feel, function and “harmony” of your favorite AR, tweaking your recoil spring is a step in the right direction. It can range from a pretty simple DIY fix and a few minutes of greasy fingers at virtually no cost, a $5 part addition, or a “Cadillac” fix that will cost you upwards of $100. Any way you go, I’m sure that you will be more satisfied with the results the next time you pull the charging handle or squeeze off a shot.