They huddled in landing craft, ready to assault the beach as incoming gunfire and artillery rained death. They crept through triple-canopy jungle, tense with anticipation of booby traps and ambush. Today, they patrol hostile neighborhoods on foot and in vehicles, scanning every wayside and window for the flash of a sniper’s shot or the trail of an RPG. 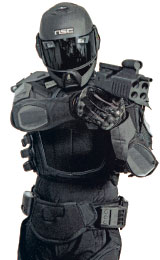 Generations of American GIs have faced fearful odds with courage and skill, relying on training and guts to prevail against foes who would willingly die before defeat. At home, LE officers face similar threats, frequently at close quarters, against well-armed criminals who value neither law nor life.

For decades, these brave men and women in uniform have completed their missions with virtually no personal protection other than their faith in a just cause.

The Kevlar Breakthrough: A major break­through in protective gear came in the mid-1960s when DuPont chemists invented Kevlar, a lightweight synthetic aramid fiber with incredible strength and heat resistance. The new material made excellent flexible body armor, as Kevlar could be used alone, worn underneath uniforms, or with rigid protective inserts similar to flak jackets. Although the fiber is not universally effective against all types of ordnance, it is standard in today’s military and LE applications.
Since 9/11, soldiers fighting the GWOT (Global War on Terror) wear significantly more protection against ballistic threats.

Natick Soldier RD&E Center: The application of Kevlar was only the start, however, of a new era in protection for soldiers and LE officers in harm’s way. Soon after GWOT began, the U.S. Army Materiel Command organized the RDECOM (Research, Development and Engineering Command) at Aberdeen Proving Ground, MD to focus on creating and fielding innovative new equipment and systems to enhance our war fighting capabilities.

The NSRDEC (Natick Soldier RD&E Center) is one of 10 RDECOM elements. In operation for more than 50 years in Natick, MA, NSRDEC is responsible for ensuring that American GIs are the best fed, the best protected, and the most mobile in the world.

Natick also includes some of the nation’s best facilities and laboratories for designing and evaluating innovative fabrics, materials and support applications including camouflage. The Soldier Center’s High Performance Fiber Center of Excellence is working with new fabrics that may lead to unprecedented capabilities not only for the wearer’s protection, but also to provide sensory data to command centers to facilitate force disposition and resource management. Natick also supports and works closely with the Program Executive Office Soldier, the Army’s program office headquartered at Fort Belvoir, VA responsible for fielding new equipment as rapidly as possible.

New designs expand the coverage of the Interceptor Body Armor Outer Tactical Vest currently in use, adding components that cover shoulders, upper arms and side torsos. Another specific direction for research is protection against enhanced-blast weapons, to protect from the shock and energy of an explosion. Scientists are currently evaluating the waveforms of various blast signatures and helping to define ways to measure damage from these hazards.

Future Force Warrior: All of these efforts complement the Army’s Future Force Warrior (FFW) Advanced Technology Demonstration, a multi-faceted program to enhance the soldier’s war-fighting capabilities and improve the efficiency and effectiveness of equipment and loads troops carry. FFW incorporates new weapons that provide greater accuracy and lethality; protective gear that not only shields against ballistic and laser threats but also manages the soldier’s individual signature to help avoid detection and monitors their physical condition. It also incorporates communication networks and tactical sensors to enable small units to operate seamlessly without revealing position; a power source to run electronic systems; and mobility and human performance enhancement to keep soldiers nourished, hydrated and alert for long periods.

A LEAP Ahead: Soldiers are not the only focus of Natick and its partner agencies. LE officers are direct beneficiaries of the Soldier Center’s work on the LEAP (Law Enforcement Advanced Protection) program. LEAP has adapted much of the FFW soldier system to police use. Working in concert with the NIJ Office of Science and Technology, NASA, and the DHS’s Office of Science and Technology, Natick’s National Protection Center Program Office improved the prototype equipment first unveiled in 2002 to ensure that police officers engaged on S.W.A.T. and other special assignments could utilize protective clothing as a system to maximize protection.

LEAP provides comprehensive protection against a wide range of operational threats while affording comfort in extreme or contaminated environments. The system’s helmet concept would provide protection and include a GPS, radio antenna, flashlight, visor with heads-up display and detachable face and neck protection. The armored vest is configured to carry weapons and additional equipment required for a variety of missions. The uniform contains integrated knee and elbow pads. The Mass. State P.D., the U.S. Capitol P.D. and the Mount Weather, VA. P.D., among others, have provided significant input on LEAP to validate its capabilities and suggest further improvements—all within technological reach.

Look Out, Robocop: These initiatives are leading to even more remarkable improvements for soldiers and police officers. Over the next decade, the R&D community will implement many of the systems in the Future Warrior Concept, a fully integrated approach to individual war-fighting. Soldiers and law enforcers in the future could wear individually tailored, exoskeletal combat uniforms with biomechanically engineered headgear, all very reminiscent of Robocop, the computerized automaton of movie fame. In this case, however, a living, breathing person would inhabit the breathtakingly complex and capable fighting gear.

The subsystems currently in development may include an advanced helmet that provides powerful situational awareness: A heads-up display built into a face shield will tell the soldier wearing it where he is, where he needs to go, and what he needs to do, all while providing directions to optimize his chances for survival. Transmitters will process two-way data at extraordinary throughput rates, moving gigabytes per second to send broadband visual data instantly and clearly. The helmet will even provide virtual eyes in the back of the soldier’s head, giving him a 360-degree field of view and the ability to control, coordinate and use defensive weapons.

The combat uniform subsystem will in­­­­­­­­­volve multi-layered materials, possibly with rigid exoskeletal panels similar to the physical structure of insects. The uniform’s layers combine to protect, plus serve as a power and transmission source and sensor system that monitors soldiers’ physiological states. Incorporating a network of thin tubing enables the uniform to wrap soldiers in a micro-climate to shield them from the rigors of hot or cold weather. These materials may also counter a variety of surveillance systems to prevent detection during clandestine operations. Finally, the system may include a tiny turbine power system that can keep the entire Future Warrior system fully powered for nearly a week of non-stop activity.

Weapon subsystems will enable war-fighters to engage the enemy directly and indirectly. A five-pound dispenser will enable a soldier to discharge soft-launched 15mm intelligent seeker-munitions that find targets behind barriers, in foxholes, or camouflaged. These rounds can detonate next to a target, spraying a dense cloud of lethal ballistic material capable of penetrating protective gear. The same weapon may also fire bursts of 4.6mm kinetic energy projectiles, small rounds capable of defeating most ordinary body armor.

NSRDEC and PEO Soldier are envisioning a formidable set of capabilities that will change the nature of battle in the future.

Elastic Smoke: Which brings us back to the immediate concern—protection against wounds on today’s battlefield. Natick and other research institutions continue to seek ways to make protective gear impervious to ballistic damage. One possibility that may offer great promise is under study at Cambridge University in England. A new carbon fiber appears to be several times stronger than filiaments currently used in body armor, and tests may show that few, if any, types of conventional ammunition can penetrate it.

The fabric’s fiber uses carbon “nanotubes,” microscopic structures that are so small and dense that they provide far greater ability to resist high-speed impact. By contrast, protective vests woven from Kevlar and similar materials frequently fail when struck by small projectiles, moving at very high velocity. In addition, the material is electrically conductive and can transmit signals and power.

There is little doubt that soldiers in the future will use equipment that is complex and expensive—PEO Soldier estimates that the next generation of protective gear could cost as much as $60,000 per troop in current dollars.
If any organizations can get that job done, they are likely to be Natick Soldier RD&E Center and PEO Soldier. These Army agencies’ mission is to focus on exploring every level of material, technology and innovation to give the men and women who risk their lives the combat edge to complete their missions successfully. 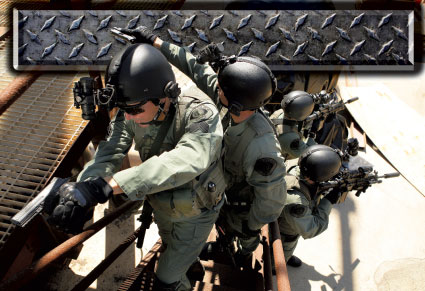 They huddled in landing craft, ready to assault the beach as incoming gunfire and…