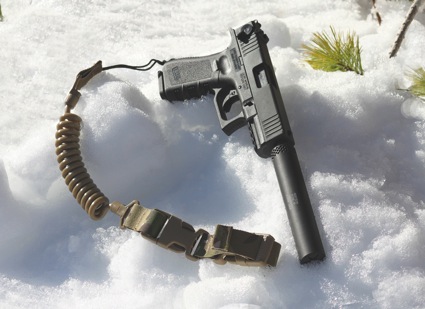 ISSC-Austria, exclusive importer and distributor of the M22 range pistol and MK22 range rifle, has partnered with GEMTECH, the leader in high- performance suppressors, to offer products that fit and function seamlessly together.

The ISSC-Austria M22 pistol with the new threaded barrel and the GEMTECH ALPINE suppressor offer target shooters the most efficient baffle design for a .22 LR suppressor while maintaining ease of disassembly (only tool needed is a US coin, such as a nickel.)Built using the combination of a Lothar Walther match barrel, adjustable sights and a very crisp 4-lb single-action trigger, the M22 with the threaded barrel for the addition of accessories, such as the GEMTECH ALPINE, is the new standard in training pistols. MSRP starts at $389.95 for the M22 pistol and $425.00 for the GEMTECH ALPINE Suppressor. New for 2011 from GEMTECH is the Tactical Retention Lanyard (TRL) in the new multi-cam color featuring a built-in, fail-safe breakaway for safe, non-mechanical retention and recovery of dropped pistols and other gear. MSRP for the GEMTECH TRL is $23.00.

The just released ISSC-Austria MSR MK22 rifle pairs perfectly with GEMTECH’s G5-22 suppressor designed from the ground up for .22 LR full-sized assault and MSR-style rifles. The MK22, designed and built in Austria, incorporates the look and feel of a military-style rifle with all the modern elements of a modern sporting rifle platform. This all-metal rifle gives the target shooter a “centerfire” feel even though it is chambered for the economical .22 LR cartridge. Using GEMTECH’s patented Quickmount system, the G5-22 has all the same features of the 5.56mm G5 but made for the .22 LR cartridge. The G5-22 was further designed for superb group size and zero first round pop. MSRP on the ISSC MSR MK22 rifle is $569.95 and the GEMTECH G5-22 suppressor is $495.00.

About ISSC-Austria
ISSC-Austria is the exclusive importer distributor and marketer of the M22 Range Pistol and MK22 Modern Sporting Rifle. www.issc-austria.com