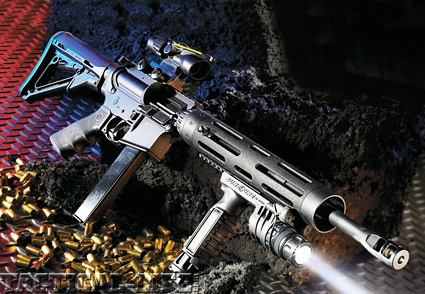 Although “The Great Ammo Drought” is now just a fading memory, it still behooves those of us who take our training seriously to examine ways of making our budgets stretch further. Back in 2009, when premium .223 Remington was approaching $600 a case—if you could even find it—JP Enterprises set about designing a training tool that would allow agencies and individuals to use the familiar AR platform yet be reliant on cheaper, easier to source ammunition. Their solution was the JP-15 carbine in 9mm Luger. 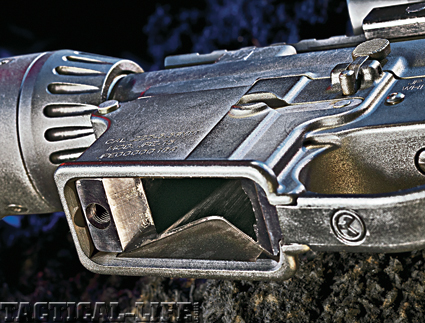 The standard-sized magazine well of the JP-15 employs an adapter to allow the use of Colt-pattern 9mm magazines.

Other companies have attempted the conversion of the AR-15 to pistol calibers, ever since Colt’s introduction of their SMG in 1982, so this is not exactly virgin territory. JP Enterprises, however, is known for being a benchmark of high-quality competition ARs, so when they quietly announced their version, it was assumed that it would have the same thoroughbred bloodlines and address some of the problems inherent in previous interpretations. 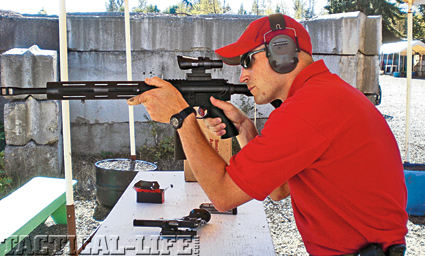 During testing of the 9mm JP-15, the author found that the pistol-caliber carbine exhibited a distinct preference for high-velocity ammunition and heavy lubrication. Photo courtesy Iain Harrison

Instead of the familiar direct gas impingement (DGIS) system of the AR-15, the JP-15 9mm uses a blowback operating system, as the 9mm cartridge doesn’t produce anywhere near enough gas volume or pressure to function a DGIS weapon. Despite this internal change, all the familiar AR controls are located right where you would expect them to be on a flat-topped AR, with no extraneous levers or switches to inhibit its use as a training tool. The magazine well uses an adapter to allow the Colt-pattern magazines (themselves adapted from the UZI) to fit securely and also use the existing magazine catch. Apart from the telltale shell deflector to the rear of the ejection port, there is nothing else to indicate that this is anything other than a vanilla AR, until you notice the .375-inch diameter hole in the compensator. This is a good thing if you plan on using it as a low-cost means to hone your shooting and weapon-handling skills. 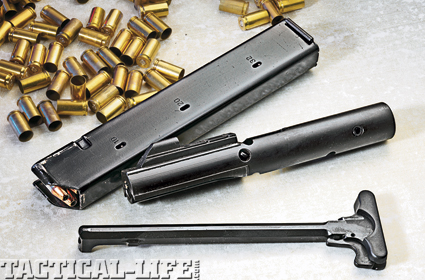 The recoil-operated carbine features a fixed bolt face and no gas key atop the carrier’s body—
just a lug to interface with the charging handle. 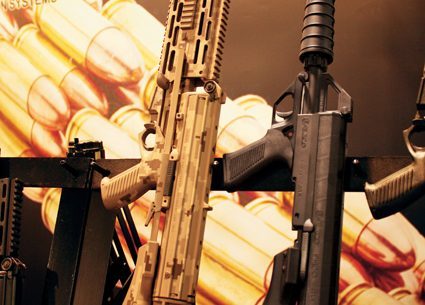