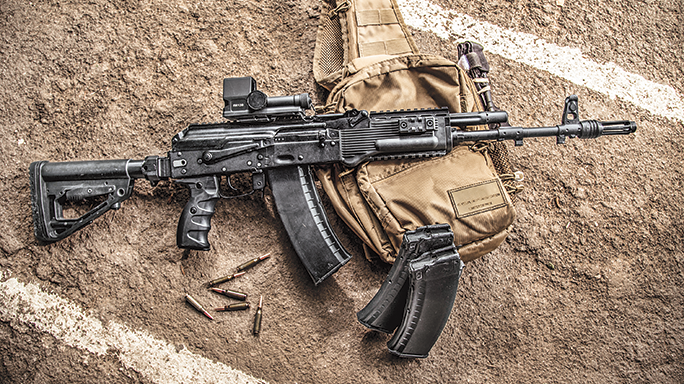 This AK-74M rifle has been equipped with Kalashnikov Concern's basic upgrade kit.
Comment(s)

Thanks to the longstanding Soviet tradition of keeping large stocks of military surplus weapons and equipment just in case World War III unexpectedly breaks out, today’s much smaller Russian army still has millions of AK-74 rifles in service and in storage. Most of these guns are in perfect working condition, but today they seem a little bit outdated, especially for more active elements of the Russian army, like airborne troops, naval infantry and recon, and Spetsnaz troops.

Of course, this could be solved by the introduction of entirely new, modern tactical rifles into service, such as the A-545 (an AEK-971 derivative) or the AK-12, but this would require a lot of time and money, while existing AK-74 rifles in storage were paid for many years ago.

Assuming the need for the quick and cost-effective modernization of the existing assault rifle stocks, Kalashnikov Concern produced its own version of the “AK-74 upgrade kit,” which is now being evaluated by the Russian army. Initial test batches of these kits were produced early in 2015, and first displayed to the general public during the Victory Day Parade in Moscow on May 9th, 2015, as a troop of naval cadets from the Makarov naval officers’ school in Vladivostok marched through Red Square armed with upgraded AK-74s.

According to the Kalashnikov Concern representatives, certain parts designs and the exact contents of the kit are not yet finalized, pending feedback from the Russian military. It is planned to have the kit be available in several versions, starting with the basic one for “ordinary” troops, and then at least two more advanced and extensive kits for recon troops and for various Spetsnaz units. It is rumored that the latter kits will also include sound suppressors, special carry bags for rifles and equipment, various “advanced” slings and other ancillary equipment according to the requirements of these specialized troops.

The key requirements for the new upgrade kits are improved ergonomics, improved flexibility, affordable costs and ease of installation.

As of now, the kit is still in development, with test batches already being issued to certain units within the Russian army. Based on their input, kit design and materials will be finalized before being offered for formal adoption by the Russian army and law enforcement organizations. Obviously, this kit will be also offered commercially. The basic upgrade kits include:

Overall, this kit noticeably improves handling of the venerable AK-74, adding about a half-pound of weight to the rifle compared to its basic version. 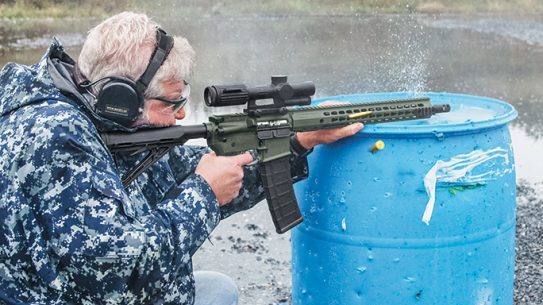 A workhorse AR returns as a direct-impingement beast for tactical operators.