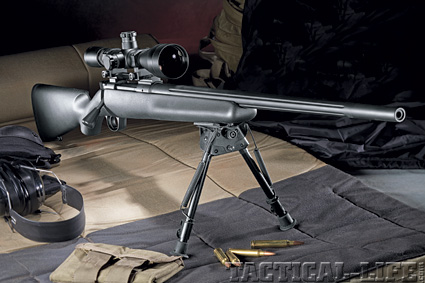 It seems the overwhelming majority of tactical rifles available on today’s market are chambered in 7.62x51mm (.308), and it’s easy to understand why. The fact that it’s a NATO round generally means it’s readily available around the world and theoretically, one of the most accessible calibers here in the States. It is also a cartridge that has been carried in the US military’s logistical system for over 50 years, and since it’s adoption as the military’s primary sniping cartridge in the Vietnam War, the 7.62x51mm has reigned supreme in the tactical world.

However, I frequently find myself questioning the almost fanatical devotion to the 7.62mm as a sniping cartridge when there are many other cartridges better suited to the task of long range shooting. There are cartridges with higher ballistic coefficients, cartridges with higher muzzle velocities and, sometimes, there are commonly available cartridges that have both. One such cartridge is the .300 Win Mag, now chambered by the good people at Kimber in their Model 8400 Police Tactical. 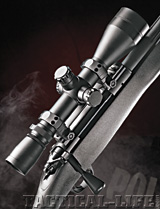 Bullet Drop Analysis
The Model 8400 Police Tactical rifle from Kimber is new for 2009, and their decision to chamber the rifle in the .300 Win Mag is significant as it offers Law Enforcement professionals a tactical rifle that shoots flatter and hits harder than its 7.62mm brother. For example, the standard load for the military’s sniping round (M118LR) is a 175-grain Sierra MatchKing with a listed BC (ballistic coefficient) of .505. The common load for a .300 Win Mag is Sierra’s 190-grain MatchKing with a listed BC of .533. While the BC increase might not sound like much of an advantage, the bullet with the .533 BC drops 10.2 inches less at 1000 yards when fired at the same velocity. My issued M40XB rifle fires M118LR ammunition at 2716 fps (feet per second), whereas CorBon’s load for the .300 Win Mag lists a muzzle velocity of 2900 fps. When we look at the .300 Win Mag’s higher BC and higher muzzle velocity we find that it drops around 53 inches less at 1000 yards than the standard M118LR in 7.62mm. 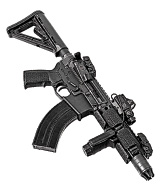