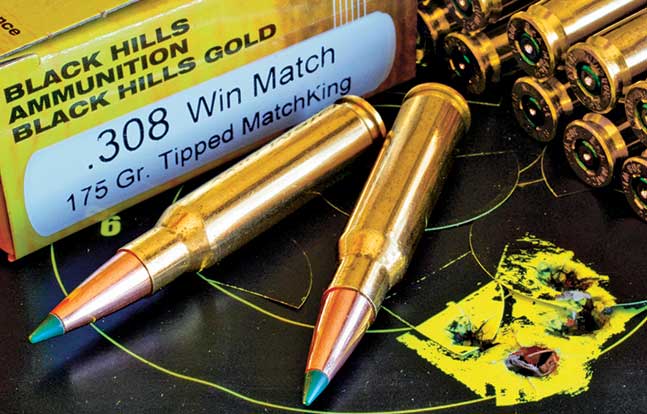 1 of 5
King of the Hills: Black Hills TMK Loads
The new Black Hills ammo shot into 0.7 inches at 100 yards. The author expects that level of accuracy or better (in MOA) at distance. 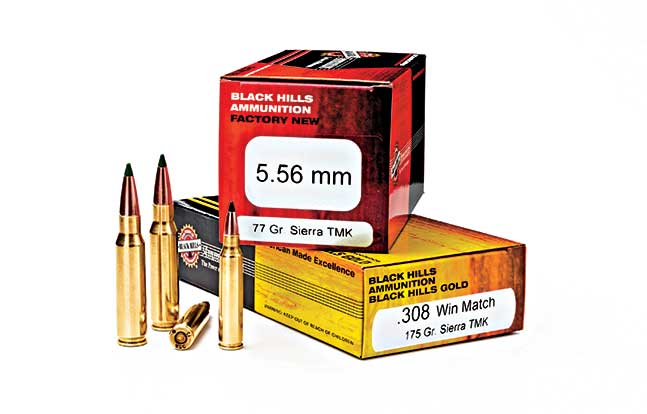 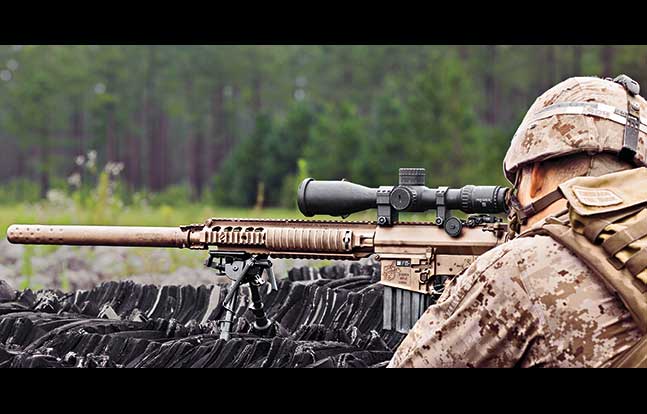 3 of 5
King of the Hills: Black Hills TMK Loads
The U.S. armed forces trust Black Hills’ high-quality ammunition because a sniper or designated marksman’s first shot is the most important. 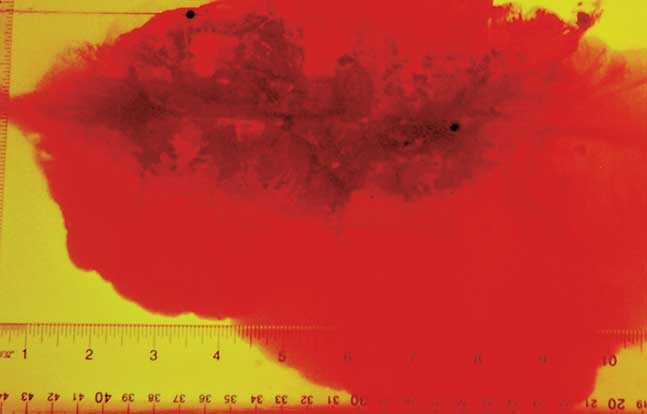 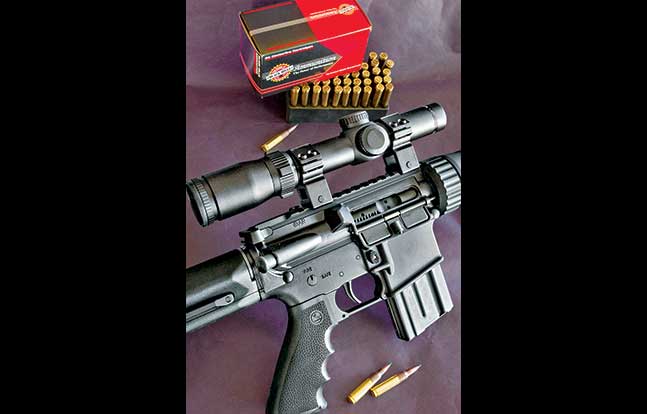 5 of 5
King of the Hills: Black Hills TMK Loads
With an ArmaLite AR loaded with Black Hills’ 5.56mm Tipped MatchKings, the author produced a four-shot group measuring 0.4 inches at 100 yards. 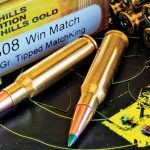 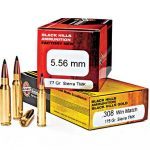 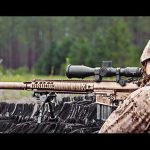 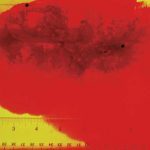 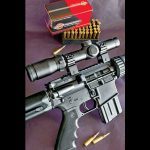 In 2012, as it filled a Navy contract for 50 million rounds of 77-grain 5.56mm ammo, Black Hills added a 69-grain 5.56mm MatchKing load to its growing line. It announced a 32-grain Hornady V-MAX load for the .204 Ruger and corked the .300 Whisper with a 125-grain spitzer to duplicate light-bullet loads in the 7.62x39mm. While Black Hills Ammunition has profited from contracts with law enforcement agencies and the U.S. armed forces, it remains committed to sportsmen. A broad selection of .223 Remington loads includes a 62-grain TSX for hunters; the quickest .22-250 clocks 4,250 fps. Black Hills’ “Gold” line of big-game rounds, from .243 to .300 Winchester, boasts bullets from Barnes, Hornady and Nosler. You’ll find Sierra MatchKings and Lapua Scenars for longer ranges. Slapping leather in dusty corrals? The Cowboy Action stable holds 14 lead-bullet loads for old-time favorites.

“We inspect every cartridge.” That’s easy for handloaders. But Jeff and Kristi Hoffman, Black Hills’ founders, and their staff turn out millions of rounds annually. “We still spend more on inspection than on loading,” says Jeff, “because we believe every cartridge from Black Hills matters to the shooter.”

The latest in Black Hills’ catalog should interest “black gun” enthusiasts and riflemen keen to hit more consistently out yonder. Sierra MatchKing bullets have long delivered the X-ring accuracy demanded by accomplished competitive shooters. In a nod to fashion, if not utility, Sierra has now capped its celebrated boat-tail hollow points with polymer tips. Known as the Tipped MatchKing, or TMK, Black Hills is using these bullets in 5.56mm and 7.62mm ammunition.

Black Hills sent me samples of the company’s new 77-grain, 5.56mm Sierra TMK as well as its 175-grain, 7.62mm Sierra TMK load. For 5.56mm trials, I chose an ArmaLite AR rifle with a heavy, 20-inch, fast-twist, stainless barrel. It wears a Magpul stock and a Traditions 1-4×24 scope. This 30mm sight, incidentally, lets you choose red or green when you illuminate the center dot in the three-legged plex reticle. Some shooters dismiss such scopes and reticles for accuracy tests. But if you turn the dot off or keep the brightness low—and use a proper target—it’s fine. The same goes for 4X magnification, which doubters think fit only for CQB or deer in the woods. I’ve fired knots as small as 0.2 inches with 3X sights. While more power and a slim reticle add precision, a larger scope adds weight for operators to carry in the field.

For the 7.62mm ammunition, I leaned on a rifle I’ve come to trust: a Sig Sauer SSG 3000. I scoped it with a new Burris C4 Plus 4-14x42mm and set the magnification at 10X. This bolt action carries a medium-heavy, 24-inch barrel and an adjustable, synthetic “target profile” stock. It feeds from an in-line detachable box.

At the range, both rifles came quickly to zero at 200 yards. While I’d like to have tested them at distance, conditions didn’t favor me. Besides, 100-yard groups are a practical standard for accuracy tests. Hewing to my habit of firing the least-violent rifle first, I snuggled up to the ArmaLite and carefully fired three rounds. At 4X, I couldn’t see holes—which can be a blessing. Tight groups become much bigger as shooters tense for the final shot. In this case I was delighted with the group—just under 0.4 inches!

Letting that barrel cool, I slipped a full magazine into the Sig. Three shots later, I had a 0.7-inch group. The next two bullets, which typically ruin tight triangles, opened this one to just 0.8 inches. As both the 5.56mm and 7.62mm Sierras have long-range profiles, I expect sub-MOA—perhaps 0.5-MOA—accuracy far away. In my experience, longer bullets that exhibit some yaw and precession at modest yardage can “go to sleep” and shoot better, in minutes of angle, at distance. You’ll need a quick twist in a .223 or 5.56mm barrel to get the most from 77-grain Tipped MatchKings. The 175-grain 7.62mms shot well from the 1-in-10-inch-twist barrel. I had no feeding hiccups in either rifle. I didn’t expect any from these sleek missiles in new brass.

Clearly, these new TMK loads from Black Hills are supremely suited for drilling black bullseyes. They should also appeal to snipers. Gelatin tests with the 77-grain 5.56mm at Black Hills have produced cavernous cavities between 1 and 9 inches beyond impact, with 12 inches of penetration (from a 14.5-inch barrel). The 175-grain 7.62mm bullets blow football-sized holes from 1 to 13 inches along the yardstick and drive deeper. MatchKings aren’t noted for retained weight or ham-to-shoulder penetration in big game. Nor should you expect a bullet releasing explosive energy in man-deep targets to stay in one piece. The sleek forms and high ballistic coefficients of these two bullets promise flat arcs and a stubborn resistance to wind drift.

While many ammunition firms focus on high-volume hunting fodder, Black Hills began early to court more discriminating markets. “Army specs call for 2-inch groups,” Jeff told me. “That’s an average for five 10-shot groups at 200 yards.” Hoo boy. Not all .223 rifles can do that! But the rack of super-accurate test barrels at Black Hills helps it meet such standards. In 2000, U.S. Army shooters began using Black Hills ammo in competition. Service contracts followed. “The Marines must like us, too,” Jeff confided then. “They just ordered 788,000 rounds.” The Navy buys Black Hills ammo now, and Jeff is proud of the thanks he and Kristi and the crew receive from U.S. Special Forces. “Those marksmen know we know that every shot counts.”

You can still get the remanufactured .223s, 9mms and .45 ACPs that jump-started Black Hills Ammunition. But for three decades now, new ammunition has carried the firm. The company catalogs 15 options in .223 alone! Black Hills has long-range loads in .300 Winchester and .338 Lapua as well as .308, plus hard-to-find numbers like 6x45mm, with 85- and 100-grain Sierras. 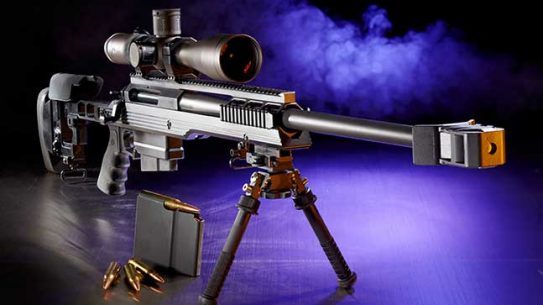 The ArmaLite AR-30A1 is a cutting-edge long-range rifle brings .338 Lapua Magnum power and...