In the last issue of Tactical Weapons I mentioned we seem to be living in the golden age of the military automatic folder. Actually, there is another school of thought that feels the spring-activated knife has been fundamentally obsolete ever since Sal Glesser and Spyderco introduced the first “Clip-It” folder back in the 80s.

Spyderco Rocks Knife World
Before Spyderco, you pretty much had a choice between a non-locking folder of traditional pattern or a rocker-bar locking folding hunter (think Buck 110) carried in a belt pouch. Not only did Sal pioneer the carry clip (doing away with the belt pouch) and the serrated edge, he gave us the first round-hole, one-hand-opening knives. Soon the entire industry was flooded with one-hand pegs, disks, flippers and thumb holes mounted on knives with carry clips and serrated edges. Today, few companies even bother introducing new models without most, if not all, of these features.

Foolproof Advantages
A manually opened one-hander has a number of advantages over a spring-activated one. The most obvious point is, there is no spring to fatigue and break. In the past, automatics utilized leaf springs that were infamous for breaking at exactly the wrong time. Only a few months ago I had a brand new German-made folder’s leaf-spring break on about the fifth or sixth opening. On many auto designs, it is extremely difficult to even open the knife manually after the spring breaks. It may also prevent the blade from locking into position. Modern coil-spring autos are more reliable but none are 100% foolproof.

Manual one-hand openers are more reliable when exposed to sand, dust, grit, plant sap, blood and assorted other field “gunk.” An auto spring can only be made so strong and it doesn’t take too much fouling to prevent one from functioning correctly. They are equally vulnerable to rust and corrosion in difficult-to-clean corners of the handle. Manual openers can usually be pushed through all but the most serious fouling.

Fast and Legal-Baggage Free
As far as opening speed goes, in the hands of an experienced user there is very little difference between the two types of knife. A good argument can be made that an auto-opener is more reliable when the user has been injured. Even with a battle-mangled arm, you can probably find a way to push a button. That may not be true of a blade that requires a certain amount of coordination to open manually.

The last point in the manual vs. auto-opener argument is that the manual one-handers are generally legal most places in the U.S. (blade length restriction may apply depending on the area). Auto-openers tend to be a much grayer area legally. While it is easy to state that they are authorized for law enforcement and military use, more than one solider has gotten into trouble for carrying an auto to and from his duty station. In 1957 the U.S. Air Force ran into this problem when they first started issuing the MC-1 Survival Folding Knife. Bomber and fighter pilots stopped for minor traffic violations on their way to work were being charged with carrying an illegal weapon when the law enforcement officer found the small, orange-handled switchblade on them. Did the law ever stop to consider that these same pilots were going to climb into a Strategic Air Command B-52 with enough firepower in the bomb bay to destroy half of the old Soviet Union?

The Semi-Autos
Just to complicate the debate, there are also a number of “assisted opening” folders now on the market that might be referred to as “semi-autos.” Pioneered by Kershaw Knives and custom knifemaker Ken Onion, assisted openers require pushing the blade partially open before a “mechanism” opens the knife the remainder of its arch. (Many companies don’t like to hear the word “spring” connected with their assisted openers—they are afraid they will end up being tarred with a switchblade image.) In many ways, this gives you the best of both worlds, as even if the “mechanism” fails, the knife can still be manually opened like any other disk-flipper-peg-hole-on-blade style.

Tried and True Options
As most readers probably already know, there are literally hundreds of different manual one-hand opener models on the market, so it would be next to impossible to mention every possible choice. I’ll just mention a few I’ve had personal experience with and regard highly.

Benchmade: One of the more recent Benchmade models that I have become especially fond of is the “Mini-Rukus.” This is a Neal Blackwood design with a 3.4-inch drop-point blade of S30V stainless on an aluminum frame handle with stainless liners and G-10 scales. The blade locks open on Benchmade’s proprietary ambidextrous Axis lock. For those looking for something even more heavy-duty, there is the standard size (4-1/4-inch blade) Rukus. Visit: benchmade.com.

Kershaw: The Model 301 (Ranger Green finish) and Model 302 (Coyote Brown finish) are two that I’m fond of in Kershaw’s Zero Tolerance line co-designed by Ken Onion and Strider. Each feature Kershaw’s SpeedSafe assisted-opening mechanism on a massive 3.75-inch blade of S30V stainless. This has to be one of the most rugged folders on the market, but it does come at the cost of being a little heavier than average at 8.6 ounces. Visit: zerotoleranceknives.com.

CRKT: The Kit Carson designed “M21-14 Special Forces” is of the fastest-selling knives in the military P.X. system. The knife offers a 3.875-inch spear-point blade of AUS-8 stainless on an aluminum handle frame. A double handguard also serves as a flipper to open the knife one-handed. Along with a steel liner-lock bar, the M21 offers the added security of an AutoLAWKS safety on the blade lock. Visit: crkt.com.

Tops: The second generation CQT 747 and Thunder Hawke are a pair of massive one-hand folders made for Tops by Fox Knives in Italy. The 747 sports a 4.5-inch blade of N690Co Cobalt Vanadium steel on a 303 stainless handle frame with G-10 handle scales. The Thunder Hawke basically shrinks this same design down to a 3.75-inch blade. Both are available with tanto-style points and with or without a partially serrated edge. Visit: topsknives.com.

Manual one-hand openers offer users most of the pluses of an auto, but with several advantages of their own. Reliable, sturdy, and legal, they may eventually replace the auto. 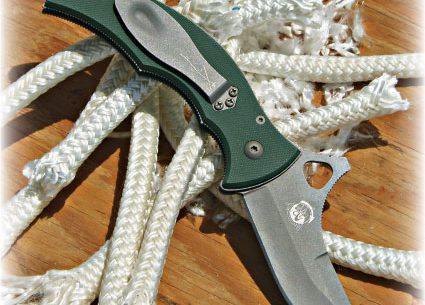