by John Larsen
in Knives
0

Currently the U.S. Army’s Improved Carbine Competition (ICC) program is looking for the next generation of battle rifle. We talked with an Infantry NCO who was astounded that the army had decided that whatever rifle was adopted, it should take a bayonet. His reasoning was that many units in Afghanistan do not carry bayonets, partly because of the type war they are fighting (chasing bandits around the hills) and partly because of the very heavy loads they carry. There is an age-old truism in the army that we always train to fight the last war. If you are following current events in Asia, who is to say the next conflict will not be one of a more conventional type, with World War II-style amphibious landings on numerous Pacific islands and massive infantry attacks by both sides?

A good friend, Special Forces Chief Warrant 3 (Retired) Michael Haugen, is currently the Director of International Military/Law Enforcement Sales for Remington Defense. He recently casually mentioned, “Hey, we have a new bayonet, would you like to see it?” But of course! 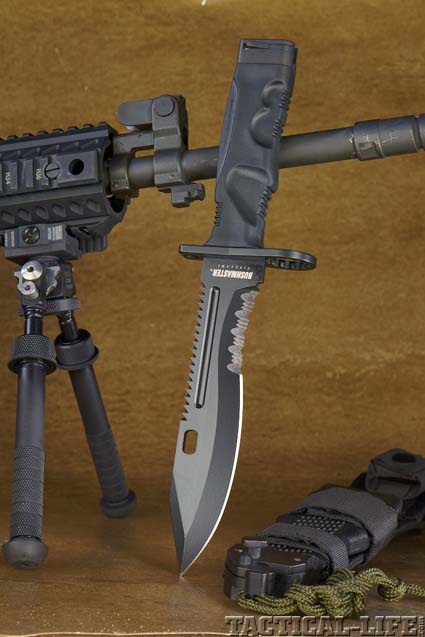 The Adaptive Combat Bayonet ACB is made in Italy by Fox, has a blade made of 440C (HRC 60-61) just over 7 inches long, 1.38 inch wide and 3/16 inches thick. The blade is clip-pointed with a slightly re-curved edge and very aggressive serrations. The spine of the blade has 3-inch section of double-row saw teeth. There is also a rectangular hole cut out of the blade that mates with a stud on the scabbard, allowing the user to cut barbed wire obstacles. The blade is coated with black “Idroglide” which eliminates reflections and provides additional corrosion resistance. Find out more in the Tactical Knives March 2013 issue.