by Tactical-Life
in Knives
0

Carrying a knife with the intention of using it as a weapon is a responsibility that most might not give enough thought. There’s a lot more to it than carrying the knife somewhere comfortable and assuming you’re safe. 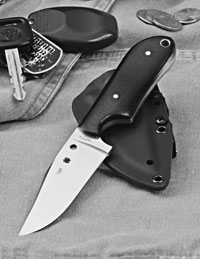 Carrying a Knife for EDC is a Serious Responsibility

Much like carrying a gun as part of your everyday carry (EDC), carrying a knife carries a level of responsibility. To be prepared, there are questions you need to ask yourself in advance of betting your life on this weapon. These 15 questions, originally posited by Ed Calderon, are a great way to assess whether or not you’re ready to carry a knife as a defensive weapon.

1. How quickly can you get your EDC knife open and in your hand?

Knives are contact weapons, which means there is a very high likelihood that if you need to draw your knife, you’re going to be in close contact with your attacker. Speed is a tactic, and in this case, it could be a lifesaver.

2. Can you open the knife with one hand?

For the same rationale as above. A knife that takes two hands to open is useless if you don’t have two hands-free to fight with. For example, you could be using your off-hand to hold someone in an underhook, or establishing wrist control.

3. Can you reach the knife with either hand?

As mentioned, when knives are employed in self-defense, it’s in close contact. While not mandatory, being able to reach your defensive knife with either hand could be important.

4. Can you deploy the knife if someone grabs you from behind and pins both of your arms to your sides?

The rear bear-hug attack is a common ambush technique, especially applied to smaller victims by a larger assailant. Being able to grab a knife from this position might save your life.

5. Can the blade shape and edge profile snag on flesh or thick clothing?

Gimmicky gas-station knives often have less than optimal blade profiles. If you look at serious knives designed for fighting, they favor straight or slightly curved blade profiles with razor-sharp edges. It needs to slice and puncture cleanly.

6. Does the blade have a highly visible reflective finish on it?

Reflective blades advertise that you have a weapon on you, which isn’t something we want to do.

7. Does it have a balance between concealment capabilities and accessibility?

This is always going to be a personal choice. The easier a knife is to conceal, the harder it is to access in a fight. An ACE Farley dropped into your pocket is perfectly concealed, but hard to get at when you need it.

8. If it’s a folder, is the locking mechanism on it solid?

Speaking of the slip joint knife we mentioned above, it’s not suitable for carrying a knife as an EDC self-defense item. The lack of a positive locking mechanism means it could snap closed on your fingers. Fighting knives ideally should be fixed blades or folders with sturdy locks.

9. How loud is it when you take the blade out of its sheath or unfold it?

For example, the Microtech Troodon makes a pretty loud “SNICK” when you open it. If you’re trying to deploy a knife stealthily, that’s not a great feature.

10. Does it have markings or writing on it that identify it as only a weapon? (like tactical, skulls, or a dragon with a ninja riding it)

This goes back to the same idea as not putting punisher skulls on your carry gun. There is a chance that any EDC item you’re carrying for self-defense could be held up in front of a jury. Do you want the prosecutor holding up something that has “Soul Reaper 9000” engraved on the blade?

11. Can you maintain it out in the field without any special tools?

Carrying a knife that requires special tools to maintain probably isn’t a good idea if you’re relying on it for self-defense. The whole point of a knife is that it’s simple, like the Shivworks clinch pick.

12. Can you afford to lose it in case you need to dump it?

Editorial: do not “dump” weapons you’ve used in legitimate self-defense. However, you will lose them to the evidence locker, especially if you stab someone.

13. Do you have a training version of the rig or folder you plan to carry? (Very important)

This is super important. That’s why, in the case of the clinch pick mentioned above, you should also get a trainer version so you can work your skills in a non-lethal environment.

14. Are you willing to invest in edged weapons training and not just carry a knife like some sort of amulet to ward off danger?

Get training. If you’re carrying a knife for EDC you need training. Shivworks EWO class is a great place to go to learn the combative and fighting skills, but there are lots of other ones.

15. Are you prepared to maim or kill someone with it if the need arises?

This final question is the most important question. Carrying a knife or a gun as part of your EDC for self-defense means that at some point you may be forced to kill someone. Think about that long and hard before you carry.