by Todd Burgreen
in Gear, Knives
0

Knowing how to use an edged weapon is a valuable commodity. Someone proficient with sharp tools can respond differently to different scenarios: CQB encounters, creating temporary shelter, acquiring and prepping food, breaching and other necessities. And not every situation warrants a firearm. So when DoubleStar introduced its edged weapon lineup, I immediately took notice. The DoubleStar Fury machete, Wrath tomahawk and Drakon fixed blade immediately attract attention with their no-nonsense aesthetics. 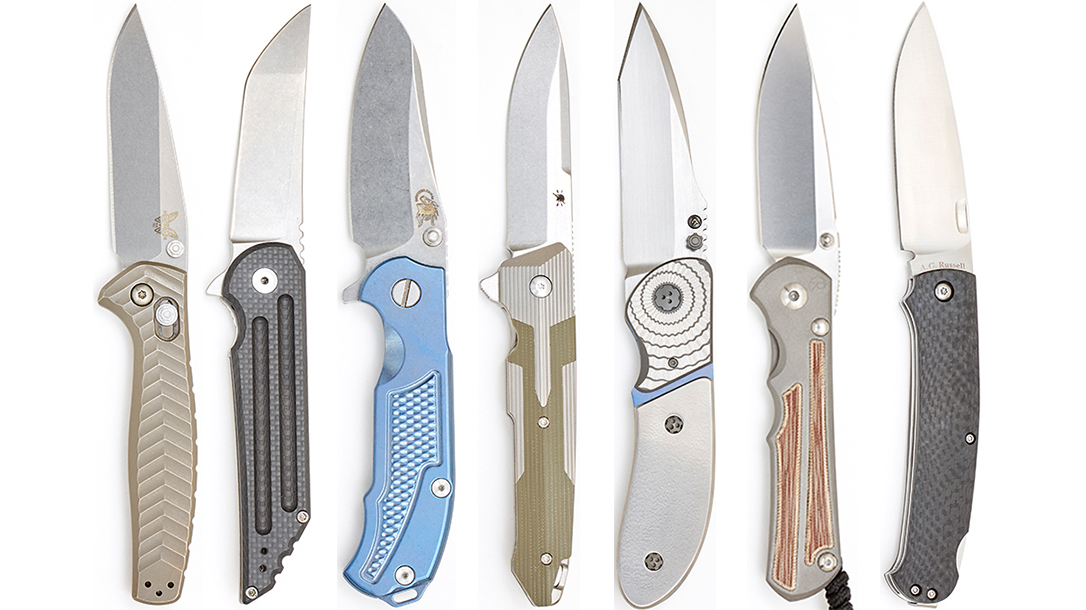 7 Elite Tactical Folding Knives That Are Both Impressive and Functional

Rob Cabrera of Filo Bladeworks designed the three DoubleStar edged weapons highlighted in this article. Conversations with Rob indicated that combining breaching capabilities while maintaining CQB aspects was the priority with the Fury and Wrath. The Drakon had a simpler design impulse—slicing, slashing and stabbing.

Well-done Kydex sheaths accompany each DoubleStar item. Numerous slots and eyelets allow users to best fit the blades to their carry needs. The Drakon’s sheath arrives with a Tek-Lock belt connector. Strong- and weak-side carry is possible, as well as vertical and horizontal orientation with stops in between. Further carry methods are possible by removing the Tek-Lock belt connection and going inside the waistband, utilizing a lanyard to unsheathe the blade as it is deployed. User preference and discretion will decide what best suits their environment and perceived threat level.

The machete is often written off as a crude Third World farm implement made with substandard materials, not worthy of serious consideration from U.S. knife aficionados. But you shouldn’t dismiss these tools. The machete is an extremely effective survival tool that proves itself everyday around the world. It combines the chopping power of a hatchet with the finesse of a knife. The machete has numerous survival applications from brush clearing, creating shelter, wood chopping, quartering game and even defensive purposes.

Rob decided to enhance the machete concept in the form of the Fury. It utilizes 0.285-inch-thick S7 tool steel in lieu of the thinner spring steel typical with machetes. S7 tool steel is characterized by a very high impact toughness and resistance to shock. G10 handle scales and a bronze Cerakote finish complete the Fury’s outward appearance.

As Rob explained, you do not want a blade too hard, with a temper bordering on brittleness. With a Rockwell hardness rating of 58, the Fury is balanced for edge retention while still allowing sharpening with basic files or stones. DoubleStar wanted the Fury heavy enough for breaching but lightweight enough to be useful in close quarters and kept on your person without causing discomfort. The Fury weighs approximately 28 ounces and measures 18.25 inches long, permitting belt carry.

Input from Fort Bragg military operators was sought in the Fury’s design. Rob drew from his background as a martial artist and land surveyor. The Fury has its balance point toward the front of the blade. This maximizes blade speed/force towards the target. The Fury’s handle profile is meant to keep the blade locked in your hand during high-velocity swings, even if your grip is compromised by sweat or blood. The textured G10 grips, with their raised, pinnacled knurling, contribute to this as well.

The Fury’s front section offers a vicious, deep-penetrating stabbing capability. The top wedge of the blade could easily be sharpened to create a back cut. The knurled pommel is not just for applying a blunt force blow; it can also be used for pain compliance when applied to an opponent’s face or other sensitive areas. The sharpened blade does not run all the way to the quillion in case a blunt strike is required.

I whittled various objects to see if the Fury could handle the finer details of creating a snare or other types of animal traps. Feeling nimble in the hand, the Fury combines knife and machete characteristics. It performed more typical machete duties involving clearing brush or breaking a trail. Furthermore, the Fury’s large blade handled all these tasks with ease—a true complement to Cabrera’s design.

DoubleStar further upped the ante with the Wrath tomahawk. The goal with the Wrath was to combine both the utility of a crash axe with a fighting tomahawk—something not often found. This was accomplished by using the same S7 tool steel used in the Fury and a keen eye during the design process.

The Wrath’s head has a distinctive face and beard configuration for durability and lethality. Cabrera purposely created a front edge profile with upper and lower edges coming together to form a point. This is done to focus kinetic energy to assist in breaching metal. By gripping the Wrath’s handle near the head, the sharpened edges can be wielded with the efficiency of a knife, especially with the extended beard. The same technique would facilitate the field dressing and skinning of a harvested animal for food.

The Wrath weighs 33 ounces pounds and measures 16.5 inches long. Its handle thickens toward the bottom to help maintain a steady grip even as fatigue sets in after heavy use. G10 textured scales finish off the tomahawk. Like the Fury, the Wrath’s G10 handle scales are easily disassembled for thorough cleaning of any blood-borne pathogens. This is something not to be ignored in a survival or CQB situation environment.

The tomahawk is as distinctly an American as the kukri is for the legendary Gurkhas. For many task, such as constructing shelter, digging, breaching and hand-to-hand conflict, tomahawks have earned their place as gear worthy of having around. Our military personnel use “hawks” in the same ways as the men of Roger’s Rangers and others involved in settling the Ohio River territory. Combat engagements are often close-range affairs where an enemy could appear suddenly. The extra power and reach of a tomahawk over a knife is invaluable.

I was surprised by the relatively light weight of the Wrath when I held it. You want the majority of the weight towards the head for efficient chopping, but you do not want it to feel like a sledgehammer, either. The proper handle-to-weight ratio translates into less fatigue and wrist strain when the tomahawk is employed. You want something light enough to carry but still heavy enough to chop and slash efficiently.

To test the Wrath’s capabilities, I used the Echo Valley Training Center’s range vehicles for breaching purposes. A professional firefighter was invited to assist. Laminated front windshields could not resist being methodically carved out for removal. Side doors, trunk lids and A-frames were cleaved through after a few well-placed strikes. The force and intensity required for getting through a vehicle’s sheet metal and bracing has to be experienced to truly fathom it. A tomahawk intended for this role has to be stout. The DoubleStar Wrath is such a tool.

The last DoubleStar blade I tested is the least auspicious, especially when compared to the larger-than-life-looking Fury and Wrath. But don’t let its looks fool you—the Drakon is just as deadly as its larger peers in the right hands. The blade is 3.9 inches long while the entire knife is 8.25 inches long. The Drakon is created from 0.25-inch-thick 1095 carbon steel coated in DoubleStar’s Dragon Hyde DLC finish for durability.

While it would be optimum to be a trained martial artist with years of dedicated effort emphasizing hand-to-hand or knife work, unfortunately this is not the case for most of us. With that said, there is nothing to say you can not still be effective with a knife using aggression and force. The DoubleStar thought process for developing the Drakon treats the knife as the blade world’s stealthy equalizer.

Attending multiple knife training seminars illustrates that there are various schools of thought of how best to end a knife fight efficiently, i.e., a thrust or slash. The DoubleStar Drakon, with its aggressively scalloped blade, is perfect for slashing and slicing. Devastating on flesh even when under layers of thick denim-like material, Rob Cabrera describes the scallops as being oversized serrated edges. The scallops offer more surface area than traditional serrated edges to power through layers of dense materials to get to an opponent’s flesh. Rob reports that tests with the Drakon against multiple layers of Carhartt-covered pig hide exceeded his expectations. Cuts penetrating down to the bone extended for over 24 inches. Also, the Drakon proved very capable of penetrating deeply into the densest mass areas of test subjects, including the cranium. A reverse edge grip is easily accommodated with the Drakon’s finger ring.

The Drakon falls into the edge/slash methodology where the quickest and most efficient way to stop your attacker with a knife is to stop the specific body parts that allow them to be dangerous to you. This is accomplished by cutting the structures that instantly disable those body parts, like muscles, tendons and nerves. Pressure cuts are emphasized for getting the most effectiveness out of your blade against specific structural targets. The Drakon’s finger ring loop ensures secure retention throughout the cut.

I decided to employ the Drakon against a “pork man” as an ideal way to demonstrate its proficiency as a “flesh carnivore.” I became aware of this simple test during a Mike Janich seminar I attended several years ago. During the course, Mike did a demonstration involving a pork roast butterflied around a broom handle, wrapped in plastic and covered in multiple layers of clothing. After starting out slowly to get a feel for manipulation, the Drakon slashed through the “pork man” without hesitation. The broom handle was deeply scarred by the Drakon’s edge as it passed through the simulated limb. 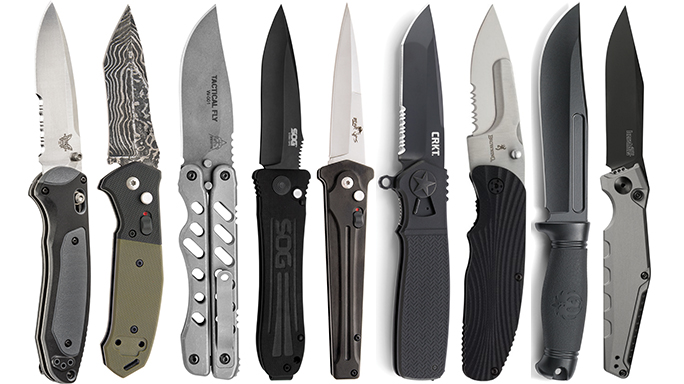 These 31 New Tactical Knives Are Built for Hard Use

I spent a considerable amount of time proving whether or not a fixed blade the size of the Drakon was practical for discreet carry. In the end, I can safely say that it is capable of personal defense on its own or paired with a gun. There is no doubt that the Drakon would be at home on web gear or the chest rig of any soldier, law enforcement officer or security-conscience civilian with a chance of coming into direct contact with a foe.

With its new edged weapon line, DoubleStar has bridged the gap between custom knifemakers and production manufacturers. The attention to detail here is evident, filling an important niche in the marketplace. Professional grade is a good way to characterize DoubleStar’s edged weapons.