Freeman Outdoor Gear produces hard use knives for all walks of life.

Jeff Freeman had an epiphany. After 15 years at Gerber Legendary Blades, including 11 years as the lead designer, he was ready to leave the city. The job was great, but the rat race of urban living—the traffic, the commute, the noise, all the people—had piled up. He and his wife Kathleen bought a 6.5-acre tract 100 miles south of Portland, made the move, and soon Freeman, an engineer by training, was looking for a new line of work. 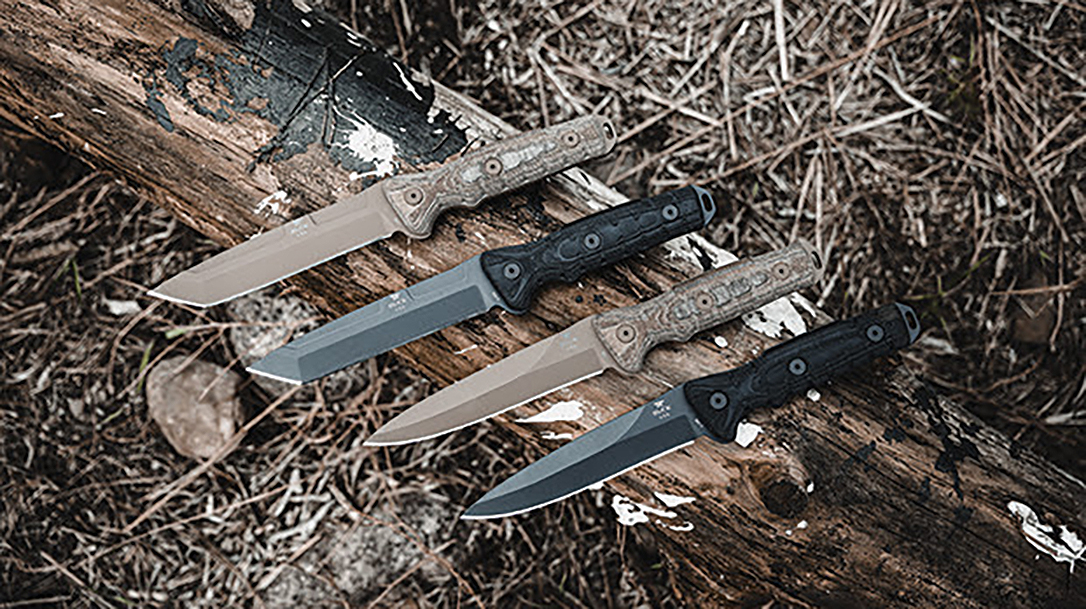 “It was depressing,” he said. “I ran into this mindset in other industries like, ‘It’s just a knife. How much engineering skill does it take to just make a knife?’ These weren’t bad people, they just had no idea what goes into building a true outdoor or military blade.”

What those industries lost, the knife world gained. Freeman built a small workshop on his property and hung a sign: Freeman Outdoor Gear. In the last four years, his reputation has grown as one of the preeminent knife builders in the country.

Freeman grew up in Sweet Home, Oregon, a small logging town in the Cascade foothills. A natural student, he found class work boring and dedicated himself to wrestling, football and weight lifting. At the urge of a high school coach, he applied to West Point…but it did not end well. He dropped out after basic training, before the start of the fall term, and returned home.

“I was a wild kid, a thrill-seeker, and not the best fit for West Point,” Freeman told me, “so back home wildland firefighting, crazy as it sounds, seemed like the safe bet. I was young and crazy and thought I was bulletproof.”

Freeman joined a co-op crew in the Oregon Department of Forestry as a firefighter and sawyer. It was a ragtag team of timber fellers, EMTs, mechanics, bulldozer operators and the like. They traveled throughout the West, from the dry high mountains of Arizona to the Montana Rockies and all across the Oregon Cascades. His crew’s call sign was 451—the temperature at which paper burns, made famous by Ray Bradbury. As a tribute to his team, many of the guys he still counts as close friends 30 years later. One family of knives in the Freeman Outdoor Gear line carries the number 451.

While working as a firefighter, he took engineering classes at Oregon State University, but a few credits shy of graduation, Saddam Hussein invaded Kuwait and Freeman gave the Army a second chance.

Learning to Make Due

Long interested in trade work, Freeman chose a machinist MOS and when his experience with helicopters fighting fires came up, the military assigned him to an aviation wing in the Republic of Panama. He spent his days in the machine shop, the only machinist for a 1,200-man brigade, making parts and tools for OH-58’s, Blackhawks and Chinooks.

“I learned how to make a lot of things using minimal tools,” he said. “There was no Internet back then, so I went to the library and took out books on blade smithing as something to do in the downtime. I made lots of one-offs, nothing tactical, but better solutions for tradesmen working on sheet metal.”

During leave he went home and married his girlfriend of four years, Kathleen. After his bid in the Army was up, they moved to Bend, Oregon, and Freeman worked as a welder/fabricator while finishing his engineering degree. He was as an intern at a titanium manufacturer, learning the construction process of the space-age metal. Later, he worked for Boeing and eventually moving on to Fujitsu Computers. He then moved on to Gerber, where he spent the better part of 15 years.

Freeman’s run at Gerber was extraordinary. He was responsible for the Gerber ’06 Auto—the automatic military and LEO knife with a glass breaker in the pommel. That knife became a standard issue and more than 300,000 of them have been deployed with U.S. troops around the world. He designed the LMF II ASEK and the follow-up, the Prodigy, which many thought to be among the best all around survival blade at that $100 price point. He did the initial design, or played a major role, in the DMF Auto, SAH Auto, Freeman Hunter Series, Metolius Hunter series and all the Bear Grylls knives, among many more.

Once Freeman made his move to the country and suffered that handful of disheartening job interviews, the epiphany came. He needed to start his own company, and Freeman Outdoor Gear was born.

Not Just A Knife

Today Freeman works in a small machine shop on his property in Brownsville. Everything he does is 100-percent made in the USA, designed, manufactured and assembled with Freeman’s own hands.

Freeman’s experience in the backcountry fighting fires, working in barebones machine shops and designing new products in CAD for Gerber all shines through in his current work. When I first unsheathed his 451-5.0—a 5-inch fixed blade—my first words were, “Holy crap!” So many companies have added “tool” to their branding that it’s almost a joke, but here in my hand was a true tool—a purpose-driven knife that sells for $225 but could easily command more.

“There are a lot of knife makers doing really well in the $400-plus category, and it’s hard to make a quality blade and sell it under $150 without making a ton of them and directly competing with the big companies,” Freeman said. “So I approached the market thinking about how I can make the best possible knife that sells around $250. It’s an attainable figure for a good knife for most guys, I think, and I can still deliver a high quality product.”

The Model 451-5.0 is a soldier’s knife, most at home on a gun belt or tac vest. The contours and texture of the G-10 handle is especially suitable for a gloved hand. There’s a subtle palm swell and depression up the middle of the scale for folded fingers. It just fits. The full-tang pommel has exposed jimping for hammer jobs—or thumping skulls. The three bolt fasteners are stainless steel and coated in black oxide. The blade steel is Spectrumwear Tool Steel, which Freeman says has a higher wear resistance than D2, and higher toughness than M2, with a Cerakote Firearms finish for minimal maintenance.

Despite the size, the knife is very light, thanks to the 6061 aluminum frame. It carries much smaller than it looks. Working around my farm in canvas work pants I forgot it was there. Also, it didn’t get in the way in tighter-fitting blue jeans walking the aisles at SHOT Show in Las Vegas.

The flipper mechanism is the smoothest I’ve ever used, and the lock is rock solid. It’s an extremely fast drawing knife. There’s distinct milled striations along the sides of the blade, harkening back to the old Kershaw Groove.

Talking with Freeman on the phone, he mentioned a smaller version of 451 Button Lock coming out down the road. But, his most recent knife is a partnership with David Polczynski of the popular YouTube channel and website Ultimate Survival Tips.

“I submitted my original sketch to Jeff—a drawing people would laugh at now—and he said, ‘Dave, you have mad design skills, but the knife is ugly,’” Polczynski told me. “He became more and more invested, and the design became more and more refined. Now it’s his baby as much as mine.”

Freeman is a humble, mellow guy. It’s hard to get him to talk about his accomplishments or lessons he learned over the phases of his life. But behind that, Polczynski told me, is a mental database of the world of knives—from designs, to patents, to old marketing strategies, to legal ramifications.

“I’d bring him a problem, like we need a divot in the handle for a bow drill, but there can’t be steel backing behind it as there’s a survival kit in the handle,” Polczynski said. “He’d take that, and a few weeks later have an answer. Then I’d tell him it has to be ambidextrous for lefties, and he’d come back again with a brilliant solution.”

The resulting design, the MSK-1 multi-scenario knife, has set the internet on fire (ultimatesurvivaltips.com). The two launched a Kickstarter to raise $15,000 in start-up capital. When the fundraiser ended they had more than $198,000. Through a second app, Backerkit, which helps with Kickstarter product fulfillment, they’ve secured an additional $126,000 in pre-orders.

“Making a good knife is an evolution,” Freeman told me. “You work in a field for five or 10 or 15 years, refining as you go, sharpening your skills. My next knife might look a little different, it might consider something new, but it will always tie back to my experience.”

That was hard-earned experience, in Freeman’s case, as a firefighter, soldier, machinist, CAD designer, knife maker and businessman. All the best bladesmiths are like that. The work is a reflection of the man. They forge themselves into the steel. For more information, visit freemanoutdoorgear.com.