0
SHARES
9
VIEWS
Share on FacebookShare on Twitter
There was absolutely no way I was hunting hogs with a knife. Really? A knife? That was where I drew the line. I had put my foot down. So much for “putting my foot down” and “drawing the line.” So, here is how it happened. Justin Bounds (guide and owner of Caney Creek Lodge) offered up a hog hunt—with dogs and, of course, a knife. To this day I cannot tell you what came over me when Justin asked who was interested—as I believe I was the first person to throw their hand up (with a rather large grin on my face.)

The morning arrived and I was included in a small group of individuals interested in this boar-hunt via knife outing. Justin said, “Who wants to go first?” Now, I was the only girl who volunteered for this—remember that. I will not name any names here, but the other volunteers immediately pointed to me and said, “Ladies first.” It was time to get schooled in the art of hunting hogs with a knife. I guess they needed a girl to show them how it was done!

I was briefed on how it would go down. The bay dogs would find the hog and coral it, letting out loud barks for us to follow with the catch dogs. Now, you can’t just stick a pig with a knife and call it a day. Nope, it is an art form I am proud to say I have mastered! 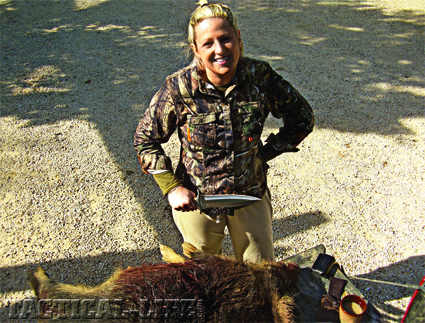 Picture this: I was in all camo—looking fabulous—running through the woods following loud barks towards a pig I was apparently supposed to stab. “Who am I right now?” is what was going through my head. I had a Spanish Joker-brand boar knife on my hip and I was constantly grasping for it to make sure it is was still there. I lost my hat while running through brush and cobwebs—something I would never do on any other occasion. Justin and Beth Bounds received this knife as a special gift from a dear customer of theirs with instructions: “It is meant to be used.”

We were fairly close to the bay dogs and Justin released the catch dogs. I swear to this day that they flew through the air towards that hog. Again, we were running. We got to the hog being held down by the ear by one of the catch dogs. Justin jumped down into the dry creek next to the loudly squealing hog. “Stab him!” is all I remember hearing. The catch dog is not able to hold the hog for long, so I had to act fast.

Taking the technique I was taught earlier that morning I jumped down into the dried-up creek, took stance and stabbed like I have never stabbed before. OK, that is more of an exaggeration. The knife Justin and Beth let me use was nothing less than, well, perfect. One strategically placed stab and it was all done.

It was over. The hog lay there quietly and it was actually a very quick way of taking a hog. I was so pleased and proud. However, I am still a lady so immediately asked for a napkin to wipe my hands that were covered in blood.
I am ready to hunt hogs—or whatever is presented—with a knife again.