by Mike Boyle
in Knives
0

0
SHARES
5
VIEWS
Share on FacebookShare on Twitter
Today’s law enforcement officer carries more gear on his belt than Batman. Besides extra ammunition, there are handcuffs, a chemical weapon, a portable radio, flashlight, expandable baton and maybe even a Taser. In addition to this, modern coppers are likely to be wearing soft body armor, packing a folding knife and a cell phone. With several different force options at his/her disposal, an officer can effectively deal with all sorts of resistive behavior.

So where does this leave the off-duty law enforcement officer? In addition to the handgun, one needs to consider what other sort of gear they should be carrying. Obviously, it’s not possible to carry the same equipment as a uniformed patrol officer but there are some basic tools that should be part of the mix. 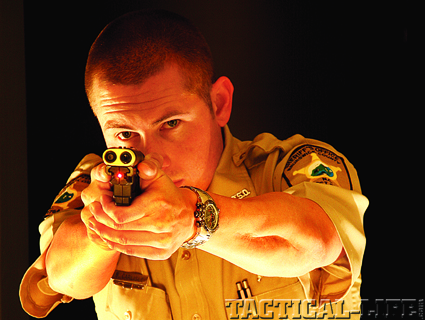 So what do we really need to carry, in addition to that gun and spare ammunition? Not a great deal really and you’re probably hauling most of it around already. To my thinking, the list of essentials goes something like this: a cell phone, a small flashlight, a knife and a less-lethal tool.

What follows is a run-down on some products that I feel can fill this role very nicely. Your needs may vary slightly, but tools outlined herein can go a long way in keeping you safe.

One of the more positive trends in recent years has been the development and evolution of small tactical flashlights. In the not-so-distant past, only large, heavy flashlights put out enough light to be of value in a defensive situation. That’s not the case anymore and the new small, powerful lights can be discreetly carried all day with little inconvenience. High quality pocket torches are available from a variety of sources.
Brite-Strike markets a number of different tactical illuminators suitable for both the armed professional and responsible citizen. For the last several weeks, I have been evaluating the BD-RL198-MH from the Brite-Strike Tactical Blue-Dot Series. The Blue-Dot lights are truly premium grade illuminators designed specifically for the law enforcement mission. 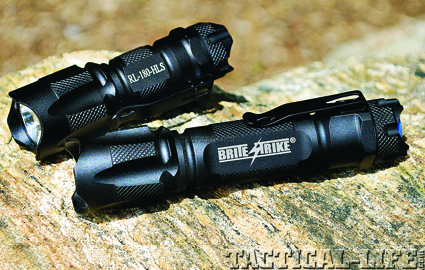 The BD-RL198-MH is a flashlight crafted from aerospace grade aluminum. Although this light measures only 5 inches long, light output exceeds that of much larger units. A faceted-machined reflector and a 3-watt Luxeon LED combine to generate up to 198 lumens of intense white light.

Tactical Blue-Dot lights are shockproof and waterproof. Unlike incandescent lamps, LEDs are not prone to mechanical failure. I’m reluctant to pronounce anything as 100 percent cop proof, but the Tactical Blue-Dot flashlights come close. In fact, one Brite-Strike unit was purposely run over by a 12,000-pound front-end loader and still functioned.

So what makes the Blue-Dot special? I’m pretty particular about switches on any light used for self-defense, but the setup on the Tactical Blue-Dot is one of the best. The signature blue dot foil cap is slightly recessed to prevent accidental activation. A light press will yield momentary activation while pressing firmly delivers constant-on illumination. As a mater of preference, I much prefer this simple arrangement to rotary dials or switches that may be difficult to execute under extreme stress. The retention clip positions the light bezel down in the pocket where it can be most efficiently drawn and brought into play.
Other Tactical Blue-Dot models include units with high/low strobe capability or even more compact one-cell units. Remote switches are available to facilitate weapons mounting. In addition to the Blue-Dot line, Brite-Strike also offers the Protector Series designed for responsible citizens.

Lights give us the ability to make informed decisions. They provide a means to safely navigate unfamiliar terrain, locate and assess potential danger and can be used as an effective measure of force. When used in concert with the handgun, a small flashlight can be the ultimate measure of control. Don’t get caught in the dark without a plan. The Brite-Strike Tactical Blue-Dot Series stands as one of the best of the breed and can compete very favorably with competitive brands. 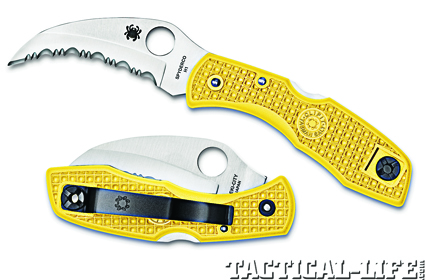 Although the patrol officer, tactical specialist or soldier may have different requirements, the small folding knives by Spyderco satisfy most of my needs. Spyderco’s proprietary hole-in-the-blade feature allows for one hand opening, a very nice touch for any application.

Some of my favorites include the C106 Tasman Salt and C14 Rescue. The Tasman Salt features a Hawksbill serrated blade made of H-1 steel. H-1 is a precipitation-hardened alloy with 0.1 percent nitrogen instead of carbon. The absence of carbon helps create a blade, which is 100 percent rust-free and holds a sharp edge. Since I live near, and often find myself in, a salt-water environment, this is a big plus in my book. The bright yellow FRN Volcano grip handle provides for a non-slip hold and makes it easy to find should I misplace it.

The C14 Rescue is one of a series of knives with rounded tip Sheepfoot blades designed specifically for emergency responders and ranchers. The Sheepfoot blade can be slipped under clothing, rope or bindings with minimal risk of injury. But make no mistake about it — this “PG” rated knife could make a formidable weapon in a pinch.

Other Spyderco folders I utilize include the C11GYW Delica 4 and C103 P’Kal. Both have variations of the Emerson Patented Opening Feature incorporated into their design. As the knife is drawn from the pocket, the Emerson Opener hooks the top of the pocket, locking the blade in the open position.

Although I’m not exactly comfortable about the prospect of fighting with a knife, they do, in fact, represent another layer of defense. If a knife served as my primary weapon, I would probably choose something very different. But for discreet carry, the Delica 4 and P’Kal with the Emerson Patented Opening Feature offer performance well beyond their modest size.

To be most effective, OC needs to be applied directly to the face, specifically the nose and eyes. I’ve taken a direct hit at least a dozen times and have observed a couple of hundred other folks doing the same. Effects are always unpleasant but speaking from personal experience, I wasn’t always incapacitated to be point where I couldn’t offer serious resistance. Factors such as wind, clothing, eyeglasses and mental state influence how effective the application of OC will be. The key to success remains getting an adequate amount of OC into the eyes and nose.

One remedy is a better delivery system. Kimber, best known as a producer of quality firearms, is now introducing the PepperBlaster, an innovative OC delivery system that addresses many of my concerns. Instead of the usual cylinder shaped, finger-activated unit, the PepperBlaster is a rectangular, palm-sized projector slightly larger than a deck of cards. A trigger from either the left or right hand activates the ergonomic shaped PepperBlaster. A safety blocks the trigger against unintentional discharge.

A pyrotechnic power driven piston creates sufficient pressure to give the PepperBlaster an extended range up to 13 feet. Two charge nozzles are present on the PepperBlaster. Pulling the trigger will deliver the first dose of OC while releasing and pulling the trigger again will launch the second. With a charge velocity of 90 mph, the odds of an adversary ducking out of the way are greatly reduced. The PepperBlaster uses a 10 percent OC inflammatory agent with 2.4 percent capsaicinoids in entire solution.

The PepperBlaster can be dropped in a pocket or purse until needed. When words aren’t working and higher force options aren’t justified, OC projectors like the PepperBlaster continue to make a lot of sense.

Impact weapons are man’s oldest fighting tools. When I wore a uniform, I carried an expandable baton on my belt and routinely took the PR-24 from the car and slipped it into the ring if things looked the least bit hinky. To get right to the point, I’m pretty fond of impact weapons and these low-tech tools gave me capabilities far beyond what I could achieve with an empty hand.

In civilian life, batons are no longer part of my defensive plan. But other options remain. First, consider a walking stick (I hear you snickering out there), I’m not quite ready for the old folks’ home, but I occasionally carry a stick while hiking. If for some reason, you can’t carry a gun, a stick represents another layer of defense. 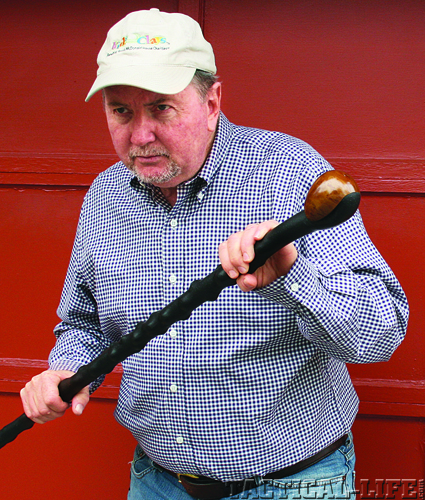 In trained hands, the Cold Steel Irish Blackthorn Walking Stick can be a formidable weapon.

Bob Koga is a highly regarded defensive tactics trainer and a leading proponent of the straight baton. Cold Steel is now turning out the Mini Koga SD2, a small defense tool that can be used for joint locks, submission holds, or as an impact weapon. Contours of the spindle-shaped Mini Koga provide an effective grip and this effective device can be discreetly hidden in the palm of the hand. A larger SD1 is also available.
Obviously, carrying all the various types of gear outlined here is outside the realm of possibility. Pick and choose carefully, based on your individual needs. Brand names may not be that important, just find some quality gear that works for you. Stay switched on and carry the tools that give you the best chance of meeting with success.