With the introduction of parachute infantry into the German and American armies at the start of WW II, both countries quickly saw a need for a specialized “jump knife.” A parachuting knife had to be deployable with one hand because that was often all that was available. Given the primitive system of buckles and releases utilized on both armies’ early parachutes, it was frequently faster to cut your way free of your harness than to unfasten things properly. An easily accessible folding knife was considered the best solution.

Early Automatics
The German Airborne quickly adopted the “Fliegerkappmesser” (flight utility knife) gravity knife issued to air crews as the “Fallschirmjagermesser” (hunters from the sky knife). The United States Army was equally fast to adopt a conventional pushbutton “switchblade” with a handy 3 1/8-inch clip point as the “MK-2 Paratrooper Knife.” Both of these hardcore knives remained standard issue throughout the war. The last issue of the Army’s MK-2 seems to have been when the 173rd Airborne Brigade deployed from Okinawa to Vietnam in 1965. 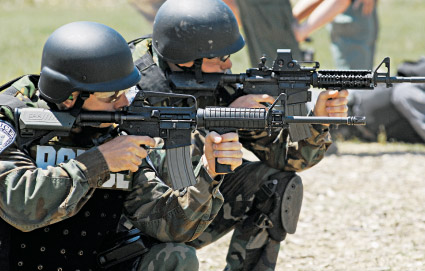