by Matt Berger
in Knives
0

0
SHARES
1
VIEWS
Share on FacebookShare on Twitter
SureFire Delta Folding Combat/Utility Knife
SureFire’s Delta Combat/Utility Knife has an appearance and configuration unlike anything we’ve ever seen. The reason for this odd looking design is utilitarian in nature. The shape, contour, extrusions and notches in the frame halves and blade all have functions as multiple tools. Unlike many tool knives, the SureFire retains real utility as a combat folder.

The 3.37-inch drop-point blade is of strong edge-retaining Crucible CPM S30V steel, polished smooth but not bright to prevent corrosive materials from adhering to its surfaces. Configured in a plain edge, the blade has a wide thumb slot that we found to be very practical for quick one-handed opening. 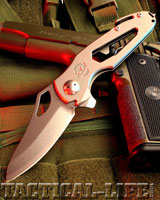 Just behind the Choil of the blade is an appendage readily recognized for what it is: a flat-blade screwdriver ground into the blade itself. The screwdriver tip also combines with the large, crescent-shaped opening in the 0.125-inch thick titanium frame halves to form a comfortable recess where the index finger to rest and aids in the prevention of slippage toward the blade itself.

The frame incorporates a number of practical tools. A notch in the frame halves combines with the thumb slot in the blade while partially closed to cut or crimp wire. A slot at the top rear of the frame guides seat belts, parachute cord, harnesses or webbing to the blade at the rear of the slot, housed within the two frame halves for easy slicing of such materials.

Another, much larger slot situated lengthwise in the center of the frame, functions as a crescent wrench of sorts. The slot widens in a graduated range, allowing it to self-seat and secure to hex head nuts from 0.203 inches up to 0.50 inches. A heat-treated 440 stainless steel point protruding from the back of the frame functions as a glass breaker. A liner-locking system locks the blade into the open position.

Finally, a wire reversible pocket clip clamps like a jaw onto a pocket or tactical vest for secure carry. Weighing in at 4.6 ounces, the Delta has an overall length of 8 inches, and a closed length of 4.7 inches. Its rugged construction and superior materials should hold up well with hard real-life use. It retails for $425. 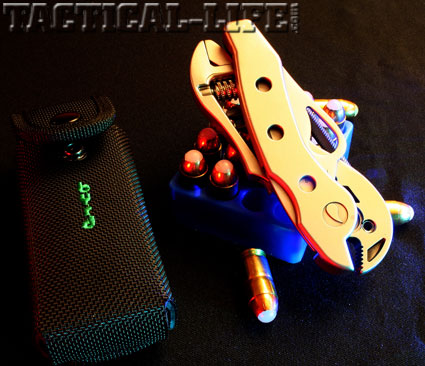 Spyderco BY15P byrdRench
As time goes by, the tool knives get more and more intricate and innovative in their design and appearance. Such is the case with the byrdRench from Spyderco. At first glance, it’s difficult to make heads or tails of how the knife is to be used, though it’s obvious that it incorporates pliers, a wrench and a number of screwdriver head attachments.

With an overall length of just 7 inches and a weight of 7.92 ounces, the byrdRench is a compact feat of engineering housing at least eight different tools in addition to its 2.5-inch 8Cr13MoV drop-point blade. A large thumb slot in the blade serves as an opening hole for the thumb and works smoothly and swiftly with a “marble-shooter” technique, while gripping the tool with the pliers forward. The blade locks into place with an internal tooth and notch under constant tension of a flat spring. Simply depressing the lock release allows the knife to close again.

Simply working the stainless frame halves prepares the pliers for use with larger objects, nuts or bolts, up to 9/16; slipping them to the second joint allows for a smaller closure of the jaws. Opening the pliers all the way in the opposite direction allows the jaws to lock open, forming a handle for use with the crescent wrench, the opening of which is adjusted in the normal fashion, by turning the worm gear behind the jaws. A spring-loaded lock below the crescent is depressed to unlock the pliers now acting as a “handle” for the crescent wrench. 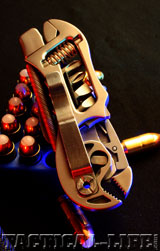 A file/hole-starter fits point first into a recess near the crescent wrench, held fast in said hole by the spring tension in another recess which the base fits into at the other end. The point of the file slightly protrudes from the frame, locking into a detent in the other frame halve, securing the two when they are closed. With the file removed, the magnetized screwdriver #2 and #3 Phillips Head and #2 and #3 flat head bits are free to be slid from their recesses in the crescent wrench frame.

Moving back to the frame end which houses the knife blade, these screwdriver heads plug into a recessed bit housing so that they may be implemented as the screwdriver and their magnetized state helps keep them secure in the frame. The bit housing accepts any standard 0.25-inch sized bit including Allen and Torx wrenches.

The frame assemblies may also be separated if one desires to use the crescent wrench knife, or screwdriver in such a manner. Simply simply clipping it in a pocket or loop using the steel clip may carry the byrdRench, or by way of the nylon carrying case that employs a belt loop at its back.

Finish is a smooth satin that appears bead blasted, and we found the byrdRench to be easily manipulated and converted for each use and the frame housings to be engineered so that they don’t pinch or puncture hands. It retails for $125. 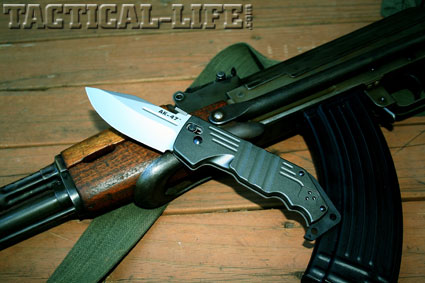 Cold Steel AK-47
Given that the legendary Kalashnikov AK-47 is the embodiment of stubborn reliability, easy operation, effectiveness and economic weaponry, Cold Steel sought to create a tactical folder that personified these same qualities.

Designed by Andrew Demko and obviously designated after its namesake, the AK is a large solid folder built for hard use. Available in two models, one version (seen here) includes thick aircraft grade aluminum scales and the other checkered G10 scales. In the case of the aluminum version, small ball-milled groves are cut lengthwise at either end of the scales, broken in the middle by three large grooves machined cross-wise at an angle, giving the handles texture. 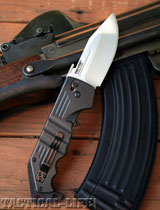 Either knife bears a heavy 3.5-inch hollow-ground Japanese AUS 8A stainless steel blade. These are vacuum heat-treated and sub-zero quenched to enhance hardiness.  In the case of the aluminum-scale version, the blade has a bead-blasted finish while the G10 version has a black Teflon coating. A ball-milled flute cut into the blade serves to lighten it a bit.

A unique and eye-catching pommel, contoured like a “V” angles back toward the edge of the hand and bears two lanyard holes. It may be used as a striking point in a defensive situation. Both versions utilize Cold Steel’s sliding Ultra Lock locking mechanism, touted by Cold Steel as equal or superior to any other lock on the market.

The AK’s pocket clip may be mounted on either side and a thumb plate which juts forward from the spine creates a hook, allowing the blade to be opened ambidextrously by the thumb or quickly opened by snagging it on the edge of a pocket.  Scallops scooped out of the scales allow easy access to the thumb plate.