by Jeff Randall
in Knives
0

Having spent a good deal of my adult life in less-than-desirable locales, one of the first questions that always pops up in conversation is what type of weapon I carry while overseas. When I answer “none,” most folks think I’m crazy or lying. The fact of the matter is, in the places I haunt, carrying an obvious weapon will get you killed quicker than if you’re unarmed. You will live a lot longer by being discreet, keeping a sense of humor and doing your best to remain neutral. 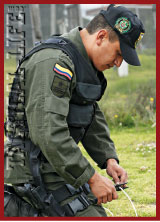 Maybe there is a little bit of untruth in my answer though, since no matter where I go I always have a multi-tool on me. And while I consider it more of a survival tool than a weapon, if placed in a “must fight” scenario I’m pretty sure I could do some serious damage with it. Besides, if you end up killing someone by crushing through their skull with longnose pliers or if they die of blunt force trauma, I’ll bet your chances of proving self-defense in a third world country might fare better than if you had whacked on your attacker with a machete or “tactical” folding knife.

Even if you don’t manage to incapacitate the thug(s) and are forced into evade (running) mode, the multi-tool is still the handiest thing I can think of to have with you. With it you can break glass, file through metal, break into buildings or make a simple booby trap for animals or humans. And while I’m not advocating anything illegal, I am saying that when your life depends on it, you should use every skill and method possible to save your own skin.

During my years of traveling with military, police and other extreme segments of the Latin populace I’ve seen a multi-tool do just about everything they’re designed for. From completely rebuilding an Evinrude boat engine on the Amazon River to crimping blasting caps to blow up drug labs. I’ve also seen them used to work on numerous AK-47 rifles, dress out a lot of jungle animals for dinner and repair a bus at the top of the Andes. I think it’s safe to say I just don’t travel without carrying the best invention to ever come to the knife world: a multi-tool.

Personal Survival
Let’s bring this story back stateside. While I don’t carry a firearm overseas, I do carry a weapon when I’m home. To be honest, after traveling all over the globe with a heightened sense of awareness, I get lulled into a false sense of security once I return home. Due to that, I figure I’m more likely to be involved in a carjacking, mugging or an assault in my home country. But I’m also smart enough to know that simply carrying a gun, and knowing how to use it, isn’t the end-all when it comes to personal survival.

I also carry a flashlight, cigarette lighter, folding knife and multi-tool on my person at all times. Not to mention keeping myself in good enough physical shape to simply evade a threat if possible. Out of the 24 years I’ve been carrying a concealed handgun, I have never had to draw the weapon in defense of a life (and hope I never have to).

In that same number of years I’ve had to use a knife and/or multi-tool more than a few times to free a victim of a car wreck, and I can’t count the times my multi-tool has been used to help someone repair a problem and get on their way, to include repairing leaking valve covers on a Beechcraft airplane so we could get to our destination without delay. My point is this: While I’m an advocate of concealed carry and do so on a daily basis, a gun is a tool with limited capabilities, and if I could only choose one tool to be on my side it would be a multi-tool.

SOG Multi-Tools
So, what is the tool that rests on my side every day of my life? It’s no secret that I’m partial to SOG Multi-Tools. I’ve had one of their EOD tools for years and it’s touched dirt on just about every continent and fixed a lot of fence and machinery while working around my farm. Don’t get me wrong, there are a lot of good multi-tools out there, but SOG just seems to do it better when it comes to what I use a tool for.

One of their latest tools, the PowerAssist, covers just about anything I could ever ask for. It’s also the first tool to feature two assisted open blades in one handle. Once you start to open either of the main blades (which are available to use with the main tool closed), the SOG Assisted Technology (SAT) takes over and completes the task for you.

Assisted opening is not a big deal to me, but the fact that SOG put a fully serrated blade and plain edge blade in easy reach without jumbling them up amidst the lesser used tools, or having to open the tool to use the blade, shows some forward thinking that the user will appreciate.

The remainder of the tools are pretty much the standard fare for multi-tools: saw blade, screwdrivers, can opener, cap and electrical crimpers, and wire cutters. One tool that does stand out as being different from the rest is the V-cut strap and cordage cutter. Since strap cutters have become a huge market due to military interest, it was just a matter of time before they started showing up on multi-tools. Having used a sharp edge to help rescue victims in car crashes, the V-cut is a welcome addition. Besides, most of the first responders I know already carry a multi-tool and separate strap cutter on them, so adding it in the multi-tool just makes sense.