by Fred Mastison
in Gear, Knives
0

Las Vegas. It’s renowned for its bigger-than-life shows, stars and spectacles. Whatever your desire, chances are very good that it can be had somewhere in Sin City. While that description tends to paint a picture of monstrous opulent hotels and casinos, it also applies to something a little less spacious. Say hello to the smallest knife shop in the world: PVK Vegas. 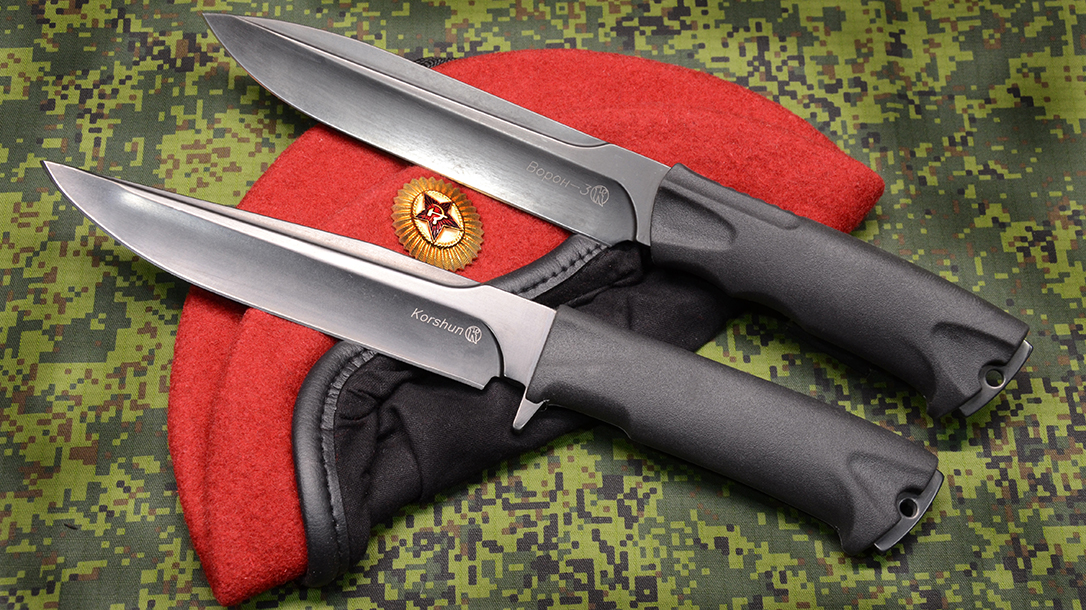 The owners of PVK, Josh and Jeramiah Burbank, have also named their cozy headquarters “the greatest knife shop on Earth.” After spending some time inside the shop and visiting with the Burbanks, I believe their claim to be valid.

PVK Vegas is sandwiched between Planet Hollywood and the Hard Rock Café right on the Strip. Blink and you’ll miss the humble façade. But once you’re inside, you’re immersed in a world of high-end blades and steel. On the surface, some might dismiss the shop as just another blade store, but it is so much more than that. Its unique status comes through its incredible in-house customization work.

I had the pleasure of visiting with Josh Burbank, who gave me an unprecedented look at his shop, which has become a destination for stars to get their custom blades. Josh shared that they have been at this business for quite some time. They originally started in Massachusetts, then moved to a space near the Las Vegas airport where they operated by appointment only. As business boomed, they decided to head to the Strip and have been there for three years and counting.

PVK isn’t new to the knife world by any stretch. “We are the largest dealer in Microtech knives and have been selling them since 1996,” Josh said. This 24-year relationship has allowed them to have access to everything Microtech has to offer, and people know it. PVK has become the place to get hard-to-find knives on the market. It’s also one of the few places that offers onsite repairs for Microtech.

And while I consider myself a “knife guy,” Josh has taken this title to a new level. “I have always loved knives, even as a kid,” he said. “My mom wasn’t as much of a fan, however, and promptly confiscated any knife she found. I even got a job so I could buy more knives. At one point, I found her stash of knives she took from me. As my collection grew, friends began to ask about what I had. That turned into me starting to sell some of my knives. That’s where it all began.”

Josh is actually a pioneer of sorts because he sold his very first knife online back in 1994. While that might seem like nothing these days, 26 years ago, online shops weren’t common and required quite a bit of work to manage. Online shopping was in its infancy at the time, and Josh carved out a space in the new, wide-open Internet marketplace. Today, PVK Vegas still enjoys an incredible number of sales through its online shop, with about 75 percent of its total sales made online.

While a long track record of sales can pay the bills, a company still has to be innovative in order to stay ahead of the curve. PVK Vegas does that through its custom shop. But even this aspect of the shop has an interesting backstory. Josh had 40 red Microtechs that, for whatever reason, were not selling. So, he did what he seems prone to do and made a big jump. He purchased a $17,000 laser and began to learn how to do laser work on knives. In short order, he customized the blades, blew them out the door and, in the process, started a revolution of sorts in customization.

His work is so beautiful and unique that he has been copied by shops around the world. One of the designs he shared with me was the Geisha. This is a beautiful, laser-engraved knife that has become a piece of art. Josh then quickly searched online and found multiple copies of the design online from other shops. The biggest offender, however, is China.

Once the custom shop side of the house quickly gained a foothold, the game was on. Josh and his brother, Jeramiah, would experiment with very controlled anodizing, which they quickly mastered. The results are blades like you have never seen anywhere in the world. With handles laser engraved with intricate details and blades sporting color-rich designs, these knives are seriously works of art.

I’m familiar with anodizing simply because I am in the firearms arena, but I had no idea it was such an incredibly precise process. There are specific colors that come to life as the blade is exposed. Knowing the progression of colors and what can be done to mix and match these colors is far beyond what I see in everyday applications. PVK Vegas hasn’t limited its customization skills to knives, either. In fact, I saw a variety of items ranging from tactical pens to fidget spinners that enjoyed the shop’s custom work.

Knife Store of the Stars

This type of work rarely stays secret, and PVK Vegas has become the destination for stars across the spectrum to get custom products. As with any place that deals with celebrities, there are always a number of stars that require anonymity. Josh shared several of these names with me, but also shared the names of several stars that openly shop with PVK, including Joe Perry and Brad Whitford of Aerosmith, Post Malone, Charlie Sheen and Celtics great Kevin McHale. There are also several great photos inside the shop that include celebrities. Most of the products heading out to these folks are custom work they collaborated with PVK Vegas to make. They usually have a specific design in mind, and the master designers and craftsman at PVK make it happen.

They don’t limit this customization to the A-list crowd, and they’ll do custom work on pretty much anything. Josh says that the project has to be realistic, but he also loves a challenge. “Doing custom work on a knife feels almost like putting a spirit into the blade. Without it, it is an efficient and well-made knife, but with the custom work, it becomes more.”

As a long-time connoisseur of Japanese swords, I can absolutely relate to what he is saying. It is said that the spirit and energy of the blade-maker is infused into the sword, and that is what Josh is doing with his work. It’s a great deal more than just a quick paint job or cutting a design into the scales. It’s bringing the knife to life and also giving it a spirit of its own.

While Microtechs have been a successful brand for the Burbanks, they also deal in some custom knives, such as those designed by Anthony Marfione and built in his North Carolina custom shop. These very special custom knives are distributed through a small network of select dealers who are seasoned professionals committed to the Marfione brand. PVK Vegas is one of the few places that has access to them.

Along with Marifone, PVK Vegas has access to and/or stocks knives from another 40 custom knife-makers from around the world. These include balisongs to stunning Italian switchblades. When pressed on inventory, the store manager estimated that they have approximately 9,600 SKUs in stock. My first thought was that inventory time must be painful, but that is one of the points that makes PVK Vegas the big little shop that it is.

I learned long ago that some of the greatest gems of life are hidden away in the small corners of the world. PVK Vegas is a perfect example of that. With its small storefront next to a T-shirt shop, you might dismiss it as you stroll by with a Mai Tai in hand. Don’t let that fool you, though. Once you step foot inside the shop and see that pretty much every square inch is covered in product, your jaw will hit the ground. You definitely need to check out PVK Vegas online or the next time you hit the Strip. You won’t be disappointed. For even more info, please visit the PVK Vegas website.

Also, this article is from the April/May 2020 issue of Tactical Life magazine. Grab your copy at OutdoorGroupStore.com.