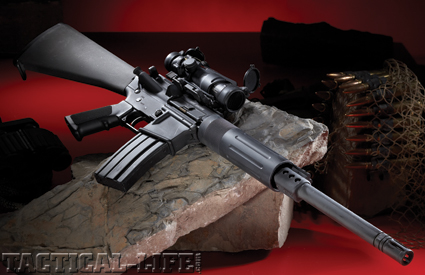 Despite what the folks in Hollywood have portrayed in their popular movies, pirates are neither wise-cracking, fun-loving scoundrels nor are they inept buffoons set up to play the fall guy for some cartoon hero. Today’s pirates are vicious, deadly and well-armed terrorists of the high seas. 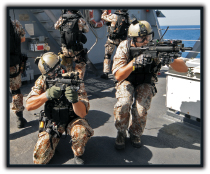 According to the International Maritime Bureau (IMB), an agency that has been tracking worldwide piracy since 1992, more than 100 acts of piracy were reported and verified in 2008. As I sit to pen this review the year 2009 has just begun and already more than 10 pirate attacks against private and commercial vessels have occurred. On 1/17/09 the IMB reported that a boat captain was killed during an unsuccessful attack against an oil tanker off the coast of Nigeria.

Shipping companies and their insurance carriers are coming to the realization that they need serious security personnel and they need them yesterday. With that, numerous professional security companies are gearing up to fill this unique requirement.

Rock River Arms LAR-458
Armed security contractors are faced with an unusual situation when dealing with shipboard security. As there will likely be few of them on board, they must be highly mobile and prepared to report to any location on the ship. Fixed gun positions, for a number of reasons, are impractical on a commercial vessel. In short, security must be able to respond and report to a deadly threat with whatever gear they can carry. While the M4 and its many variants are the tools of choice for mobile security teams in Iraq and Afghanistan, I think most professionals would like something with a bit more punch than the 5.56mm/.223 Remington cartridge when facing waterborne attackers.

The rifle/cartridge combination being considered here is the Rock River Arms LAR-458 CAR. This rifle has a carbine-length 16-inch Chrome Moly bull barrel with 1:14 twist rifling. An A2 style fixed stock brings the overall length to 36.5 inches. A standard M4 weighs only 7.5 pounds empty and the Rock River Arms .458 is a mere 7.6 pounds. The rifle/carbine is semi-automatic and operates with the standard direct gas impingement system. Rock River includes their excellent two-stage match version trigger.

Naturally, Rock River Arms has added some of their own unique features to the .458 gun. These attributes include a free-floating aluminum handguard to surround the barrel. The upper receiver is a flat-top configuration that is ready to accept any optic or sights the end user desires. No iron sights are included with the gun.

One of the beauties of the .458 SOCOM project is that it mates so well with existing components. The RRA rifle is fed with standard 30-round M16 magazines. During testing I was able to load eight rounds of .458 ammunition into a standard 30-round magazine and insert it on a closed bolt. Yes, you can squeeze nine rounds in but that completely compresses the magazine spring and you can’t insert it onto a closed bolt. A better choice is to load eight.

Dedicated .458 SOCOM upper receivers can be mounted on any standard AR/M-16 lower receiver with a rifle stock. It is important to have a full-length, rifle-sized recoil spring. Rock River Arms offers a complete .458 upper receiver with bolt carrier group and charging handle.

Optics
The LAR-458 is ready to accept whichever optic you choose. For this mission a Trijicon ACOG was used. The 4X optic provides magnification for longer shots but is not so powerful that you cannot quickly acquire targets. ACOG scopes use a combination of fiber optics and Tritium illumination and thus require no batteries.

The particular model used was the “RCO” with the red chevron and hold-over stadia lines. It was quickly attached to the Rock River Arms rifle with a LaRue QD mount.

.458 Test Results
The .458 SOCOM round is all about power. During this evaluation not only did I fire them for accuracy, I destroyed material as well. After all, the reason we are considering the gun for this mission is its ability to penetrate more than just the bad guy. If the pirates are zipping up on a fast boat, putting large holes in the hull and engine is not such a bad thing.

As I did not have a small watercraft to engage, I made due with some material you might normally consider good cover; brick, concrete and steel. Using .458 SOCOM ammunition from Cor-Bon and SBR, I shattered bricks and 3-inch thick concrete blocks with little difficulty. Punching holes in quarter-inch steel proved a simple task as well.

Ready For Pirate Hunting?
A maritime security operation is certainly a unique mission with very particular requirements. Working on the sea requires some specialized equipment and forethought on the part of the operator.

When will the piracy threat end? Who can tell? Attacks at sea have been ongoing for centuries. The new breed of sea-going terrorist is well-armed and organized. Stopping them will require training, preparation. And if the time comes, a semi-automatic sledgehammer such as the LAR-458 can be the “big stick” needed to put them down.

Mission-Specific Gear
Shipboard/Maritime operations are un­­­­ique and the environment demands certain considerations. I come to the table with an intimate knowledge of this as I spent two full years providing shipboard security while a member of the Marine Detachment aboard the aircraft carrier USS Forrestal.

Although ships look large on the outside, moving around them on the inside can be tricky. Low overheads and “knee-knockers” are constant hazards. The external decks and walkways are covered with rough “non-skid” that chews up skin and clothing. You definitely want to have protection for your hands and your head. Kevlar helmets are excellent protection against both impact and fragmentation but are expensive for some companies, and bulky. When moving rapidly in and about the ship, some type of “bump guard” for your melon is a must. Hockey or bicycle helmets will work to keep you from splitting your head open.

As for your hands, some type of tactical gloves are a must. Nomex or Kevlar material will protect your hands from flash burns and hot gun barrels. The hard-knuckle styles of gloves are recommended.

Some type of body armor is naturally a must-have. In addition to doubling as a load-bearing vest, your armor should have some type of breakaway or fast-detach option. Loaded down with hard plates, spare magazines and gear, your vest will sink you like a stone if you go into the water.

While preparing this review, a visit to www.blackhawk.com proved that the company carries gloves and armor to fill the bill for any maritime operation. For the last few months I’ve put their Light Assault boots to the test. They are most definitely light weight while providing solid traction and ankle support. I spoke with a friend of mine who happens to be a former Navy SEAL and he assured me that you could not only run in them but you could run in and out of the water and even tread water if need be.

Being of the “show me” mindset, I put the boots on and headed down to the beach on the Gulf of Mexico. I deliberately ran in and out of the surf, completely soaking the boots. As advertised, the water quickly vented out of the mesh sides. After I returned home I rinsed the salt water residue off and put them up to dry. Good to go next day!

Salt-Ready Essentials
My time at sea taught me the value of good weapons maintenance. High-carbon steel will rust seemingly overnight. A good cleaning kit is a must. Don’t forget a blade! Spyderco introduced their H1 non-rusting steel a few years ago and they now have several salt-beater options. While down at the beach I took a few with me and submerged them in sea water. I waited a couple of days to rinse them off and when I did they were as rust free as the day they were pulled from the box. Visit www.rockriverarms.com for more. 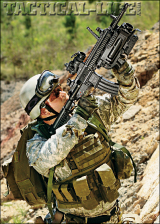 Despite what the folks in Hollywood have portrayed in their popular movies, pirates are…