by Dave Spaulding
in Knives
0

If you don’t have at least one Spyderco knife, then you just don’t get it. Spyderco is the original knife with a hole in the blade for one hand opening with all others copying what Sal Glesser designed. Spyderco is a small company and the fact that they continue to introduce unique designs year after year is quite amazing.

This year they introduced Digital camouflage or Digicam, which is the outcome of applying engineering psychology with the study of visual biophysics and human visual performance. The pattern is made up of small micro patterns, optically reducing the eye’s ability to detect and discern what it covers. Various digital patterns are developed and used for the U.S. military to make more effective concealment.

A cornerstone model in Spyderco’s “Save and Serve” lineup is the Military Model meeting the requirements of a high-performance, lightweight folder designed for hard use. Since the steel is the spirit of the knife, CPM-S30V with almost 2 percent carbon seemed the logical choice for the blade given its reputation for long-term edge retention and rust resistance.

The ‘Millie’ has a modified clip-point blade laser cut with a 14mm Spyderco Round Hole for quick deployment and for use with gloves. Texturing above the hole holds the thumb in contact with the blade’s spine during cutting for confident control over the sharpened edge. The handle scales are made of Digicam G-10 with the lock’s liner nested (inlayed) directly into the scale, pumping up lock strength without the addition of bulky liners.

Spacers between the scales create a gap running the handle’s full length exposing the inside workings for inspection and cleaning. The handle flares slightly at the front end creating a finger choil and at the butt end, which keeps the knife from slipping forward or backward in the hand while sawing or making tough or aggressive cuts. A contoured black metal clip is set for right-hand tip-down carry. The overall length of the knife is 9.5 inches with a blade length of 4 inches and weight of 4.25 ounces. 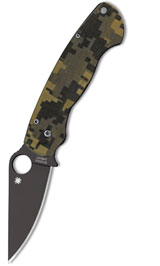 The Para-Military is a two-thirds sized version of the Military Model. Its flat-ground S30V blade stretches 3.09 inches long and has a carbon level of 1.45 percent with the addition of vanadium and nitrogen for over-the-top edge retention. The thumbhole is quite large for opening the knife blade with gloved (or large) hands. Its Digicam G-10 optically melts into its surrounds while shunning chemicals and temperature fluctuations.

They expanded the handle at the back-end keeping the hand from slipping while making forward or backward pulling cuts. The package comes topped off with a nested Compression Lock for the ultimate in a mid-sized survival knife that can level trees, carve tent stakes and never generate a second glance. The overall length is 7.875 inches with a weight of 3.75 ounces.