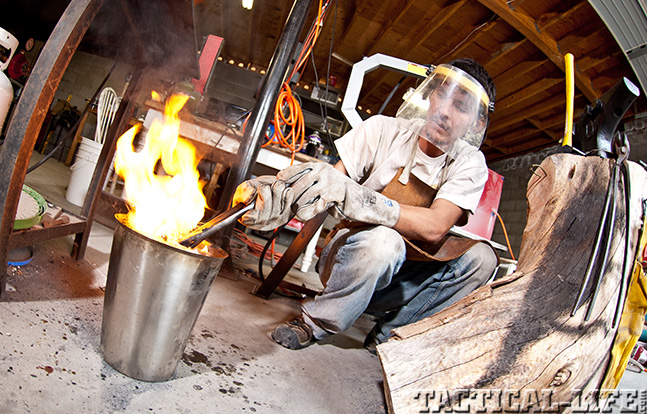 If it hadn’t been for a testy exchange with Senator John McCain at a Tucson, Arizona, town hall meeting, I might never have learned of Bates Knives. Former U.S. Marine Rifleman Bryan Bates attended the town hall meeting to let McCain know he was dead set against sending American troops to Syria. “I didn’t want any U.S. troops fighting alongside al-Qaeda—the same guys that were trying to kill me in Iraq and Afghanistan,” said Bates.

The cell phone video a friend had taken went viral. An effort by a writer for the Marine Corps Times to find Bates for an interview discovered the website for his knives and resulted in an article describing his how he stamps each of his hand-forged blades with the Arabic symbol for “infidel” and then quenches it in pig blood.

“My phone hasn’t stopped ringing since that article came out,” the self-taught bladesmith said. He continued, “I made my first knife in 2010 when I came home on leave from Afghanistan, where I’d been working as a contractor. I’m completely self-taught. I didn’t have anyone to teach me, and I had to research everything and learn through practical application.”

Most of Bates customers are old Marine buddies and fellow contractors. His only forms of advertising were posting pictures of his work on Facebook and word of mouth. “I had so many orders I decided to quit being a contractor. I stopped going to bars and riding my motorcycle to spend more time making knives. But three days after the Marine Corps Times article ran, I had 600 inquiries on my website.”

Bates offers about 10 different styles of knives, all with fixed blades and G10 grips. He also makes the Kydex sheaths for each of the knives. He steadfastly refuses to use blanks, insisting that he wants to control every aspect of the manufacturing process to offer a truly handmade knife. He has even taught himself to pattern weld to produce his own Damascus blades.

While I was in his shop, he was working on one of his biggest sellers—the Stubby—a fixed, 3-inch-bladed knife with incredible balance. Bates cuts each blade from 1095 high-carbon steel. His shop has rudimentary machinery—a couple of drill presses, belt sanders, a small forge and an anvil secured to a tree stump bolted to the cement floor of his 30-by-30-foot workshop.

“I bought this house while I was doing contract work. My wife did all of the footwork, and I told her that my only requirements were a workshop and acreage.” Bates’ house is located on the southwestern outskirts of Tucson in a rural area. In addition to his workshop, there are also pens for his goats and chickens behind the house. He doesn’t seem to mind the isolation.

“I’m completely self-taught. I didn’t have anyone to teach me, and I had to research everything and learn through practical application.”

He lit a cigarette from the jet of flame from his forge and then placed the Stubby blade in it. “I like to heat the blade to the point where it becomes non-magnetic. I can tell by its color.”

Bates removed the glowing blade, set it on his anvil and then struck it with his infidel punch. He flipped it over and struck it with another punch. This one is a brand his grandfather used when he was a rancher. He placed the blade back in the forge while he readied his quench bucket. Filled with what he calls “old Harley oil,” Bates also adds his secret ingredient—pig blood—which he buys at a local Asian market.

Flame shot up from the bucket when he immersed the blade. Afterwards, he bead-blasted the blade to look for any fractures in the metal and then ran to his house to place it in the kitchen oven. “After quenching, I have to soften the blade a little so it’s not so brittle before I put the edge on it. I also do the Parkerizing in the kitchen.” He readily admits his newlywed wife is sometimes annoyed with his encroachment of the kitchen for his knife-making endeavors.

Bates returned to the workshop and lit another cigarette. We stood and talked at the door and watched low clouds dump an unusually cold November rain on the mountains. There was a rugged hill of rocks a couple hundred feet high on his property line.

“Made a range card?”

He smiled again. “Not saying I have, but I can tell you it is exactly 120 yards from the top of that rock to my back door.” Old habits die hard!

He sat down at his belt sander and ground the G10 handle to the blade of another Stubby. Later, he’d do this again for the Stubby blade in the oven.

We chatted for a while longer. He talked about the good he and fellow Marines achieved in Afghanistan and Iraq. “I’m a firm believer of the no-better-friend-no-worse-enemy policy,” he said. “When we first got to Haditha, Iraq, in September 2006, we took casualties every day for quite a while. But by the time we left, the city was flourishing and safe.”

Bates was a member of the famed Echo Company, 2nd Battalion, 3rd Marine Regiment, led by Captain Matt Tracy, a commander who Bates says “any of his Marines would have followed to hell.” After four years of service and deployments to both Afghanistan and Iraq, Bates left the Corps as a private first class. Bates said, “I had some NJPs,” or non-judicial punishment, also called “office hours,” which permit commanders to administratively discipline troops without a court martial. It can result in loss of rank, confinement, loss of pay and other restrictions. He added,
“I liked to drink and fight.”

Bates tried college for a little while before taking a job as a private security contractor in Afghanistan. “The money made it worthwhile,” he said. “I’m just a 28-year-old kid and bought this house.”

Now his focus is improving his trade skill. “There’s a couple pieces of machinery that I badly need,” he said. “I’m working on having a family friend build me a power hammer. I also need a metal bandsaw.” Like many small businessmen, Bates has reached the point where a hobby has turned into a profession, and he’s now looking for a way to maintain the momentum the Marine Corps Times article generated. “My wife handles the orders and administrative end of things. That lets me concentrate on building knives.”

Bates currently has an assistant who he is training to build knives and a few good friends who provide muscle when needed. But he steadfastly refuses to make any concessions that would sacrifice quality solely to increase production.

The prices for Bates’ creations range from $100 for his railroad spike knives to $500 for his Damascus Pig Sticker. Bates said that he constantly gets requests for new styles of knives from his buddies in the field and is looking to expand his lineup with a trench knife with brass knuckles on the handle, push daggers and a fighting tomahawk.

If anyone else had come up with the idea to stamp their knife blades with the infidel symbol and quench their blades in pig blood, I would dismiss it as a sales gimmick. But Bates isn’t a poser—he is a battle-hardened Marine who has survived countless firefights in two different countries and proudly calls himself an Infidel. Politically incorrect? Absolutely! Does he care? Absolutely not, and neither do the people who buy his knives. 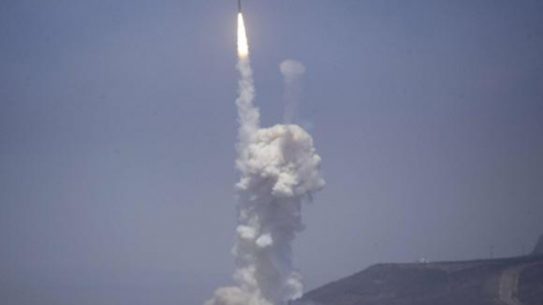