0
SHARES
1
VIEWS
Share on FacebookShare on Twitter
A quick look and the knife appears to be a standard folder. The nice part is that it works well as your daily pocket knife or, if you’re adventurous, as an angled blade.

The scar is only 1 inch long and has faded over the years, but I still feel tightness in the knuckle joint. It was the result of a foolish movement while cutting with a slip-joint knife and I can blame no one other than myself. A man’s hands are supposed to carry a few scars to remind him of those moments of stupidity and to caution him in the future. I am not the only person bearing such a scar. In fact, I’m willing to bet that most of you just had a flashback to a similar incident. 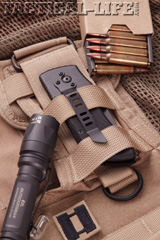 A folding or pocket knife is nothing more than a fixed blade modified for easy carry. Over the years they have progressed from having no lock at all to the myriad of systems available today. But to date, these systems have had one thing in common: They were designed to keep the knife closed until you wanted to open it. Once opened, the lock was designed to keep it in that position. It is as simple as black and white—opened or closed. At least that was my opinion until recently, when I had a chance to handle a new knife that adds 36 shades of gray to the equation.

The Seber Claw-Loc
Seber Design Group, Inc. has recently introduced a new folding knife with a ratcheting blade locking system known as the “Claw-Loc.” By my count, the blade will index to 36 different locations between being closed to being fully opened and will lock in any one of those locations. You may be wondering why you would want to be able to lock your blade half opened and I will cover that issue during my testing of the knife. First, I want to give you a description of the knife and its other features.

At first look, the knife seems like many others. It has a 3-inch drop-point blade with a shallow hollow grind. The blade is 8CR13MOV stainless steel while the handle scales are G10. The frame and bolsters are both stainless steel. My test sample has partial serrations on the blade but a non-serrated model is available. If you’re right-handed, the knife can be operated one-handed with a single-sided thumb stud. If you’re a lefty, you’re going to have to use two hands. There is a pocket clip mounted to the bolster for a tip-down pocket carry. There is a grooved filler between the bolsters providing a good surface for your thumb during heavy use. The remainder of the handle spine is left open for easy cleaning. You never realize how much trash and lint finds its way into your pockets until you pull out your knife and look between the handle scales. The knife is available in a bead blast, satin or stealth (black coating) finish. Combine that with the serrated/non-serrated feature and you have a choice of six combinations.

This all sounds normal until you notice the three-position slide lock on the bolster. From a closed position, you can slide the lock forward with your right thumb. This will unlock the blade and allow it to open to one of 36 positions. The blade cannot be moved back into a closed position but will advance to the next open position until the stud on the lock is slid to its mid-point. This locks the blade into whatever position it is in and prevents it from further movement, open or closed. To open it more you must again place the stud in its fully forward position. To close the knife, slide the stud fully rearward. Once closed, the stud can be placed in its mid-point to lock the knife in the closed position. This mode of operation may sound a little complicated, but it took me longer to describe it than it did to become familiar with its function. The Claw-Loc ratchet system cannot be fully seen but I was fortunate enough to look at the mechanism while attending the Shot Show. My first thought was that it reminded me of a Swiss watch. The gear system is well executed and stout enough for some heavy use. 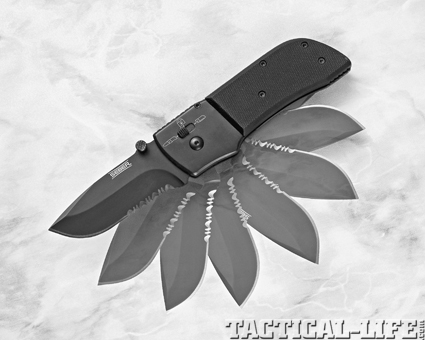 By my count, you have 36 difference positions for the blade. You pick the angle and lock it in place.

Why 36 Flavors?
Now it is time to discuss the concept of using a half-opened knife. After all, there has to be some reason why you should want this feature. The easy answer would be to tell you to check out the website for Seber Design Group. They have several videos showing the advantages of this design. However, that would make for a short article and I wouldn’t really know how well the knife worked. I thought I would start out by trying to duplicate the task they showed in the videos and then go from there. 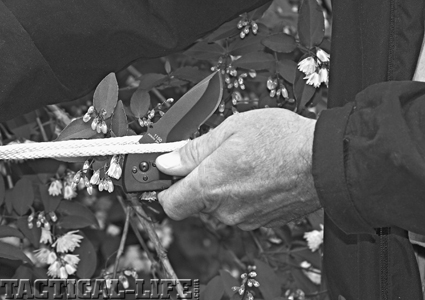 Cord or rope? With just an adjustment in angle for size, you can still make an easy and safe cut.

All of us have had to do a little pruning in the yard and those of us who are married had to make sure it looked good when we were finished. By moving the blade out to about a 45-degree angle and locking it in place, it was easy to rotate the knife around a branch until the blade sliced through, leaving a clean and even cut. If you are familiar with a small tubing cutter, you will notice similarities in the method of cutting. The branch rides between blade and handle, making a clean slice as it rotates. I was able to work my way up to half-inch branches without exerting any true effort. Each cut left a nice squared surface. From the braches I moved to cutting various plastic tubing and hoses. Again, with the same angle to the blade, cutting was a breeze. Garden hoses have a bad habit of springing leaks and the squared edge this knife leaves made splicing repair fittings an easy task. After trying it on the garden hose, I wondered how often I really would have a need for this type of tool. It worked great but I’m not going to be working in the garden every day. My answer came last weekend as I was packing up my old Ram Charger to leave my campsite. A plastic fitting in my heater hose, used to flush the radiator, decided it was the perfect time to disintegrate. When you’re 90 miles from home and have little extra play in a hose, you want a good clean splice. Every Wal-Mart will have a flush fitting, but try to find a heater hose for a 20-year-old truck. With the Seber knife the event went from disaster to inconvenience.

To forget the garden work and to regain my manly stature, I thought I would try stripping some electrical wires. I found that by decreasing the angle of the blade to the handle I was able to cleanly strip wires from the smallest to the largest. After a minute or two of practice, you can feel when you’ve cut through the sheathing and pull it off before cutting into the wire itself. 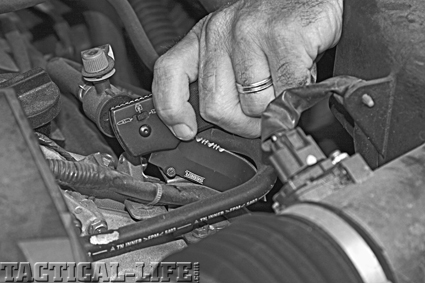 There are times when space is limited. The engine compartment of most cars has some really tight spots.

One test I have often used to evaluate a blade’s edge is to split a hose lengthwise. There are two reasons I use this test. The first is, it will dull any edge rather quickly. The second, I like to cover the metal on my tree stands with this hose to prevent scratching my rifles. If you have read enough of my articles, you will remember that I have picked up a few stitches in this process. I have finally found the solution! This drop point will slice without having the edge of the blade exposed to the user. It will still dull even the best of knives. A few minutes with a Sharpmaker brought the edge right back. Cutting rope or paracord is another task that leaves the edge exposed to the user. You can angle the blade and pull the rope across the edge, which results in a slicing motion without fear of cuts.

A chore that was obvious was trying to cut something in a close space. There are times when your knife and hand just don’t fit in the space allowed. By using the angle blade you can often work in even the smallest of gaps.

For those of you less adventurous, you can even use this knife fully opened. It cuts well, holds an edge for a reasonable amount of use and re-sharpens easily. No matter what blade position you use, a flick of your thumb will lock the blade in place. The Seber Design Group has the drop-point model available now and is working on additional designs. A tanto and tactical version may be available by the time this makes press, along with a Utility Model with replaceable blades. Remember, a scar or two may make you look manly, more than that, you just look plain foolish.