The Jumpmaster knife is the result of a letter that Spyderco President Sal Glesser received from a Major in the 82nd Airborne Division who was in need of a better JM (Jumpmaster) knife. In all the airborne operations I personally participated in, it stated the JM needed to have a sharp knife with him, but none was ever issued by the Army. Probably to the Major’s surprise, Sal showed up at Fort Bragg, North Carolina and sat down with the 82nd paratroopers and listened to them explain what they wanted in a JM knife. 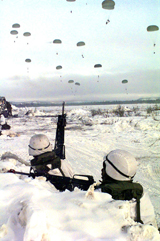 Why do you need a sharp knife as a JM? For those of you who have never exited an aircraft in flight a quick explanation is due. After “chuting up,” each jumper is closely inspected by the JM to ensure his equipment ready and parachute is properly rigged. Once in flight and approaching the DZ (drop zone), the JM will issue a series of commands to get the paratroopers to their feet, check their equipment and attach their tough nylon static line from the back of their parachute to an anchor line (metal) cable inside the aircraft. When the paratrooper leaves the plane and falls to the end of the static line, the pack-closing tie is broken; when the parachute is fully extended the paratrooper then falls free, his chute opens and he descends to the ground.

Now, right off the bat, parachute riggers do a great job! The men and women who pack the chutes are unsung in praise for the great work they do. Having said that, on rare occasions when the jumper hits the end of the static line, he or she does not break loose, ending up a towed jumper. This is an extremely dangerous situation and requires immediate action on the part of the JM. Hopefully, the towed jumper is still conscious, not knocked out by other jumpers hitting them or being banged against the side of the plane. If the jumper cannot be retrieved inside the aircraft and is conscious, then the JM ensures the aircraft is still over the DZ and cuts the static line, allowing the jumper to fall free and activate the reserve parachute. If the jumper is unconscious and cannot be retrieved into the aircraft, all you can do is call ahead and have the runway foamed and pray for the best. Everyone I knew in 24 years on jump status hoped not to be a towed jumper, and if it happened, wanted to be cut free to descend on his or her reserve parachute.

True Story
I have a friend who ironically was in a JM course as a student when he became a towed jumper. Mike was cut away over the sprawling U.S. Kadena Air Force Base (Okinawa), deployed his reserve and landed safely—well, sort of. Mike is of half Filipino descent, and in Vietnam ran recon in SOG dressed as an NVA. If you are going to land at night on a USAF base, in a sterile uniform with weapon, web gear and a rucksack, where do you not want to land? That’s right, inside the then ultra-Top Secret SR-71 (Habu) pit! Although Mike landed safely, the USAF Security police knew they had an infiltrator and even after the JM Committee located him, it took several hours to get him released.

Spyderco’s JM Details
The Jumpmaster Knife has a 4-½-inch-long sheepsfoot blade of H1 stainless steel that is 1/8-inch thick and about 1 3/8 inches at its widest point, and with a signature Spyderco hole just forward of the handle. The 4-¾-inch-long handle is made from FRN (Fiberglass Reinforced Nylon) that is BI-directionally textured for a secure grip. Underneath the FRN scales, the full tang is skeletonized to reduce weight, and there is a lanyard hole in the butt. The scales are secured to the handle with epoxy and six screws and swells downward to form a finger guard in the front and a bird’s head beak butt. The handle is about 1-½ inches at its widest point but only about 3/8-of-an-inch thick, which keeps the JM very close to your body. Weight of the knife is just less than 5-½ ounces.

The sheath is made of injected molded polymer, the rear of which is slightly curved so it will lie against your body or calf without flaring out where it could catch on something. It comes with two 24-inch-long nylon straps with quick release buckles and a multitude of attachment points. The JM knife is securely held yet is easily accessible. The sheath with leg straps weighs just less than 4 ounces.

Ready For Deployment
One thing that is critical for a jumpmaster knife is that it be readily accessible. When things go wrong, like the forementioned “towed jumper,” seconds count. The Spyderco Jumpmaster knife meets this criteria and then some. If you look at WWII photos of U.S. paratroopers, you will note a lot of them with the M3 Trench knife strapped to their calf, just above their jump boot. With the two 24-inch nylon straps, this is one option for wearing the JM. I preferred to wear the JM on my thigh. When you are doing your JM inspections, you stand up and down a lot, and anything I have strapped to my thigh has a tendency to slip down. I took a piece of suspension line and made a 16-inch loop, attaching to the sheath through the holes on the side. I slipped the loop under my trouser belt, and then slipped the sheath down through the loop. Now the JM knife hangs just where I want it to and the leg straps keep it there.

The sheepsfoot-pointed blade of the JM knife allows you to safely slip the blade underneath, say, the main lift web of your parachute harness in case you have to cut a jumper out of the harness. The serrated edge allows you to pull up and cut through the webbing with minimal discomfort or injury to the jumper.

Cuts Static Line In A Flash
I looked around and found an old static line, some tough tubular nylon, parachute suspension line, nylon webbing, part of an old equipment parachute canopy and some 1-1/2-inch-thick manila rope to use to test the JM knife ability to cut. Not to my surprise, the aggressive Spyderco serrations made short work of all the above materials. In fact, the only item that I found a straight edge worked better on was on the parachute canopy material. My straight-edged Endura cut the canopy more smoothly than the JM. I even cut through the static line where it was doubled over—one slice and it was parted! There is no doubt in my mind that Spyderco’s Jumpmaster knife will handle any parachute-related cutting emergency it could face.

Next, I cut up a bunch of cardboard boxes for the recycle bin, and then slashed through some of my thicker Blackberry bush branches, which presented no challenge to the JM knife. While not designed for offensive operations, the JM knife still has the potential to function in a combat or survival environment.

Coast Guard Duty
I also think the JM would be a great knife for Coast Guard operations, or as a dive knife, with the super corrosion resistance of the H1 stainless steel and aggressive serrated edge. Longtime readers may remember an article I wrote about a potential disaster that was narrowly avoided when I had to cut loose an RB-15 (rubber boat-15 foot). Then I had to throw off my web gear, reach back and open the Velcro closed flap of the nylon pouch for my British clasp knife, pull the knife out, bring it in front of me, open the blade with my left-hand, all before I could cut the line. With the JM it would have gone more like this: Reach with my hand, pull out the JM, step forward and cut the line. Valuable seconds would’ve been saved.

If you are performing JM duties, or small boat operations, diving, kayaking, First Responder duties or any activity where you need instant access to your knife and a super-aggressive cutting edge, Spyderco’s new Jumpmaster knife is the blade for you. The MSRP is $269.