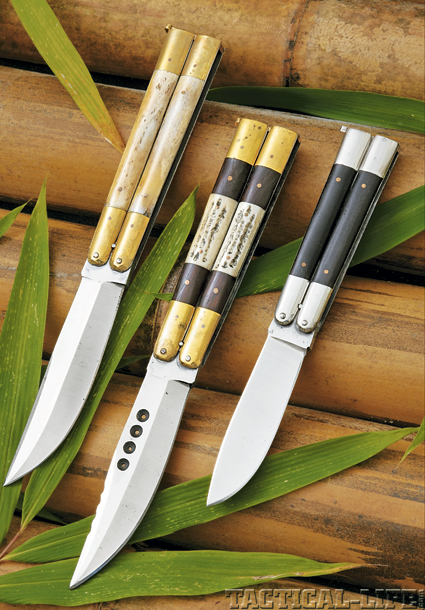 Three Batangas Balisongs from Ona’s shop. All handcrafted from 5160 spring steel and using various materials for the handle scales ranging from Kamagong wood to horse and deer bone.

Before the arrival of spring-assisted or fully automatic pocket knives, before manufacturers started putting holes in their blades and thumb studs, there was the original one-handed opening knife. The Balisong is a folding pocket knife with two handles counter-rotating around the tang. When closed, the blade is concealed within grooves in the handles. This is loosely known as a butterfly knife.

While actually invented in Europe, the Filipino Balisong knife was spread around the world by American soldiers returning from World War II. Translated from Tagalog, the word “Balisong” means “broken horn,” as the original Balisongs were made from. 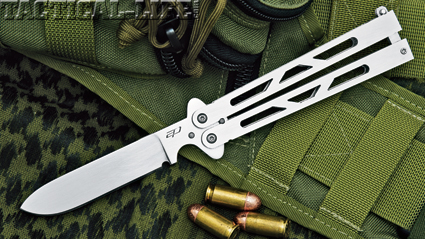 This is the model AP2 made by Armand Palacio. Like the AP1, it is also made from D2 steel and features titanium handles with a very unique pattern cut into the handles, yet another stamp of Armand’s distinct style.

A town in Batangas, known as Barrio Balisong, is where legend Perfecto de Leon is credited with developing and manufacturing the first Filipino version of the Balisong knife in 1905. Since then, the Balisong has become perhaps the most infamous Filipino weapon to date. Locals in the Philippines are much more likely to carry knives than guns. Knives are commonly carried as tools by farmers and used by street vendors to prepare coconuts, pineapples, other fruits and meats. This has led to the Philippines being known as a ‘blade culture,” so much to the point that the neighboring country of Palau has a term for Filipinos: chad ra oles, which literally means “people of the knife.” 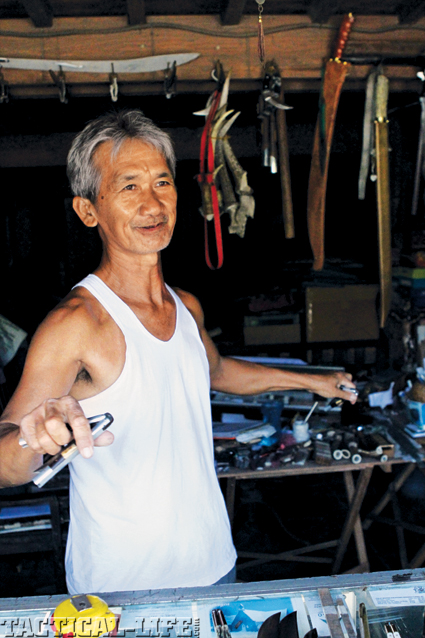 At the shop, Ona displays his lightning fast speed as the author’s camera struggled to capture it. He is known for his two-handed deployment of the Balisongs simultaneously. In the background hanging, many other tools can be seen that are both for sale and collectables including US bayonets and machetes.