When we hear the phrase “cutting edge” we think of new technology or the latest in space-age materials/manufacture. Seldom do we think of an object’s ability to cut with maximum effectiveness. While I have not dedicated my life to learning the ways of the edged weapon, I have carried and used knives my entire life, including the 30 years I was a cop. Thus, I have a strong appreciation for the knife as both weapon and tool. And regardless of which you consider your knife, the one thing we all want is maximum cutting ability. It doesn’t matter if it’s a fight, removing our self’s from a car wreck or opening a box, we want our knife to cut cleanly and efficiently. 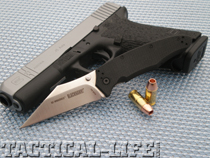 Something that I have noticed is that blade configuration is constantly debated in the knife world. Spear point, drop point, Tanto…all have their fans and detractors, and which is the best blade design is as hotly debated as 9mm vs. .45 or Isosceles vs. Weaver. This is fine provided the debate does not get out of hand, but in the case of blade configuration, I want one that will cut efficiently regardless of the need. Several years ago, I was at the Gunsite training facility and made the acquaintance of TK contributor Michael Janich. I had been reading and watching his articles/videos for years and was familiar with his work, but I had never met him, so I introduced myself. That short introduction ended up in a 45-minute conversation, which then led to an evening long (into the late night, actually) conversation back at the hotel on all things personal-defense related. Mike has some solid ideas on personal defense and that “conversation” continues to this day. Though we come from different backgrounds, our ideas on defense seem to be one in the same. What did I ask Mike that started this ongoing dialog? “What do you think is the best overall knife design/blade configuration?” What I expected and what I got were two different things. He pulled out a Spyderco folder and said, “Best knife I have ever used.”

Wharncliffe Blade
Mike explained that he designed two knives for Spyderco: A neck knife called the “Ronin” and the “Yojimbo,” a folding version of the same knife. I remembered both models, dismissing them as just trying to be different, which shows how little I understood them. The term “edge geometry” refers to how efficiently a blade will cut and Mike explained to me that this is a combination of the grind of the blade and the shape of the cutting edge. The straighter the cutting edge, the longer the edge stays in contact with the substance being cut. For example, most blades have some type of curve, or “belly,” towards the tip that can cause them to push material away unless a “snapping” action is initiated when performing an arc-like slashing cut. If the curve of the belly and the arc of the cutting motion coincide, little, if anything, gets cut. Mike spent a great deal of time performing cutting tests on various substances, including things that simulated meat and tissue. He found that the straight blade cut best regardless of the material or the cutting motion. Carpet knives, box knives, utility knives and other tools designed to offer maximum cutting effectiveness have this same blade design. With a straight blade, the cutting action is consistent from tip to hilt with no energy being bled away from the effectiveness of the cut. This straight blade configuration is called a “Wharncliffe” blade.

Wharncliffe blades keep the cutting edge in contact with the surface longer than others. Due to the straight cut, once the blade makes contact, it stays there regardless of whether initial contact was at the tip or midway down the blade. In addition, the large “wedge” that is apparent on the top forward edge of the blade enhances the penetration of the blade when stabbing. As the blade enters, the wedge forces the cutting edge down as it moves forward, shearing along its length and penetrating extremely well. For personal defense, this allows the knife to penetrate very effectively, even through heavy clothing. It’s kind of like being a “large caliber” knife—a bigger cut means a more significant wound channel! The large “back” or wedge also allows better placement of the thumb, which enhances one’s ability to apply downward pressure. With the wrist at a natural angle (approximately 135 degrees), it allows the user to apply full force to the cut and maintain it until the substance being cut reaches the tip and the blade releases contact. With a Wharncliffe blade, one can dump power into the cut regardless of whether they are stabbing, slashing or chopping with the knife—it doesn’t matter.

Unfortunately, no one understood the Ronin or Yojimbo knives and they failed to catch on even though independent testers found that they cut better than knives with much larger blades! After Mike took over the knives category at BlackHawk, he did not forget the Wharncliffe-style knives he had designed and, when he got the chance, he introduced what may be the best version yet, calling it the Be-Wharned.

Blackhawk Wharncliffe
Every reader should be familiar with BlackHawk knives; it’s hard not to be. Mike Noell originally acquired the hugely popular MOD (Masters of Defense) line and hired Mike Janich to spearhead knife design and product development. Since coming on board, Mike has expanded the line to include the more economical line of BlackHawk Knives (formerly known as BlackHawk Blades), which are knives that have the same high level of performance as the MOD series but sell at a price point that if left behind on a mission, call out or dispatch, the end user will not feel like they left their wallet behind as well. The new Be-Wharned is part of this less expensive line, and while the name is certainly a play on words to catch the buyer’s eye, it is a direct tribute to the Wharncliffe design.

Good Looking Wharn-ing
The Be-Wharned differs from the Yojimbo in that the lines of the knife are more attractive. In reality, the Be-Wharned is very sleek looking, offering the “tactical” appearance that many knife buyers favor. The blade is made from AUS 8A stainless steel and is ½-inch longer than the Yojimbo’s blade, while the handle is actually shorter. What you end up with is a lot of blade in a small package, which is what we are all looking for in a pocket folder. The Be-Wharned has dual thumb studs for one-hand opening, something that I find easier to use than a traditional hole. Many will question why AUS 8A was used as it is not considered a “high tech” steel. The truth is, AUS 8A stainless steel works great, is easy to sharpen and certainly easy to take care of. In should also be noted that the straight Wharncliffe–style blade is very easy to sharpen, even with a basic sharpening stone.

Some will question the extremely pointed tip of the blade, in that it is too fragile for street work and if they intend to pry with the blade, they will be right. The Be-Wharned blade is designed to penetrate soft objects like tissue, but if the tip is broken, it will not affect the rest of the blade or its ability to cut. Testing on human tissue has shown that the force required to penetrate tissue is directly related to the sharpness/fineness of the tip. In the case of the Be-Wharned, the sharp tip combined with the extreme ramp-like shoulder results in a blade design that will penetrate deeply very quickly. It also allows the knife to be removed easily instead of binding-up in the target. From a utility standpoint, the Be-Wharned has the same blade configuration as a Stanley Utility Knife, so using it as a work knife is perfectly fine.

The handles are made from G-10 that is manufactured in the U.S. and then shipped to Taiwan. American-made G-10 is superior to that found overseas and offers a very aggressive texture; thus, BlackHawk has their handle material made here and then shipped to Asia to support their knife production. The liners are manufactured from hardened 420J stainless steel and are “nested” or recessed into the G-10 material. The liner-lock is solid and has a large engagement surface to keep it from releasing inadvertently, regardless of the task undertaken. The pocket clip is completely reversible in four positions so that the end user can carry it tip up or down, left- or right-handed. The open handle construction allows junk to fall out and not collect in the action, but the knife’s structural integrity is maintained via the stop pin and three additional points of attachment along the length of the handle.

In the end, the BlackHawk Be-Wharned is a user-friendly folding knife that has an unlimited number of uses, whether it is thought of as a weapon, a utility cutting tool or a little of both. Don’t let the unconventional look throw you—this knife offers a great deal of cutting ability in a compact package. What more could you ask for?