“Hello, my name is Terrill and I am a gun snob.” There, I have admitted it and I feel better already. For years I have believed that anyone that came to a knife fight with anything less than a handgun (a rifle is better) was foolish. I would sneer every time the conversation turned to knife fighting. The concept of facing an enemy with a knife only meant one thing. You let your guard down and allowed an adversary to get too close. To me, a knife is simply a tool to be used for common chores such as cutting rope, and only as a last ditch personal defense weapon. All of my concepts underwent a major overhaul after viewing the results of a recent knife test. I was testing a 5-inch blade against hide, meat and bone of a deer carcass and the results opened my eyes. I don’t think the amount of damage surprised me as much as the ease at which it was inflicted. Ever since conducting those tests, I have been looking at tactical knives in a different light and have made an effort to search out other large tactical blades. 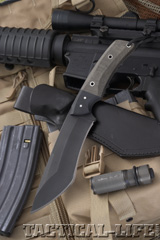 Knives With Flow
My search proved fruitful and I have seen more than a few, but like any other class of knife, after a while they all seem to look alike. Then I came across a knife made by John Gonzalez of Dervish Knives. The knife had a flow to its design that drew my attention as it stood out from the crowd. His shop may be across the country in Colorado Springs, Colorado, but in this day and time, that is only a phone call away. After a bit of conversation, I had several examples of his work on their way for photographs. Along with the original design, John sent a few examples of his other models and each carried the unique design flow that separated his work from the others I had seen.

John, who has been making knives since 2001, has developed a preference towards certain materials and patterns. He likes large knives of 5160, 154 CM or ATS 34 steels with either natural materials, Micarta or G10 for handles. While he will work with customers concerning their personal design features, John’s work shows he has an excellent eye for design. Of course, knowing what a knife should be and actually making one are two different things. All of the samples sent in had perfect grinds and smooth transitions between handle and blade.